The Internet of Things market is in its infancy. Will Johnson Controls see it mature into adulthood?

In an emerging market, like the Internet of Things (IoT), today's leaders can easily become tomorrow's laggards. Currently, Johnson Controls (NYSE: JCI) is at the forefront of developing building automation systems (BASes) and following several strategic maneuvers, redoubling its efforts to seize the burgeoning smart building market. Let's take a closer to see how these moves improve upon the company's strengths.

What's in a name
One competitive advantage which Johnson Controls retains is its highly respected brand name and reputation. The company, for the ninth year in a row, ranked as one of the world's most ethical companies by Ethisphere, and it ranked 14th in Corporate Responsibility Magazine's 100 Best Corporate Citizens list. Regarding BAS, Johnson Controls, due to Metasys, is an esteemed industry stalwart, that won Frost and Sullivan's 2009 North American Award for Market Leadership of the Year. According to the research firm: "Outstanding expertise in customer care coupled with the ability to combine technology and successful marketing has benefited Johnson Controls in its quest for market leadership within the BAS industry."

The company's edge extends beyond Metasys and into the respected names of its other properties. With nine heating and cooling brands -- such as York and Coleman -- in its portfolio, three leading refrigeration brands, and 11 air distribution brands, Johnson Controls offers its customers a variety of industry-leading products to pair with Metasys. Thus, it can provide more competitive pricing to customers who avoid third-party equipment. The commercial market provides ample opportunity for the company. According to Navigant Research, global revenue from commercial energy-efficient HVAC systems alone is expected to total $340 billion from 2015 to 2024.

Thanks to a joint venture with Hitachi completed last October, Johnson Controls is adding yet another respected name to its portfolio. Retaining 60% ownership in the partnership, Johnson Controls will broaden its reach in several Asian markets: China, Taiwan, Japan, and India. Not to be underestimated, the Asia-Pacific (APAC) is a substantial opportunity. According to research from Technavio, the global residential HVAC market in APAC was valued at $31.7 billion in 2014 and is likely to reach $51.4 in billion in 2019. 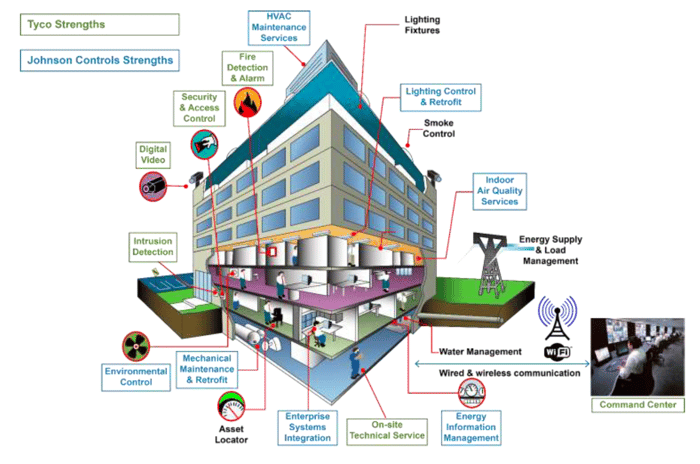 The merger unites two IoT- savvy companies that lead in separate niches: Johnson Controls in HVAC and Tyco in fire and security. Once Tyco's proficiencies are integrated with the current iteration of Metasys, Johnson Controls will enjoy another competitive advantage: offering the market a more comprehensive solution -- one that's not just smarter, but safer as well. Consequently, the joining of the two business presents a formidable force in BAS; Tyco will contribute 17 fire and security brands to Johnson Controls' already extensive portfolio. It will also contribute its own BAS, Tyco On. And with expected synergies to yield about $650 million in savings, Johnson Controls will be able to offer customers a more competitive Metasys at a more attractive price.

Committing to the front line
Another competitive advantage that Johnson Controls enjoys is its technology lead in regards to Metasys and its battery products and solutions. The company has no intention of resting on its laurels -- instead it continues to pursue innovation. Over the past three years, the company's research and development cost has averaged $772 million per year -- accounting for 2.3% of average revenue over the same period. Tyco will fit in nicely in this regard as it is also committed; its average R&D spending has accounted for 1.9% of its revenue over the past three years. Conversely, competitors like Ingersoll-Rand are not as committed -- it has averaged 1.7% on R&D over the past three years. Johnson Controls' commitment ensures that it retains its competitive position as an industry leader.

Sticky sweet situations
Another significant competitive advantage for Johnson Controls is the high switching costs for customers who already employ the company's building automation solutions -- and for customers who have adopted solutions from Tyco. Developing a system for a building is no easy feat: sensors and controllers must be deployed, and personnel must be trained in using the system's software. Transitioning to a new system is not as simple as changing out a couple of smoke detectors. The switching costs become even higher for campus operators, like hospitals and higher education institutions.

Subsequently, as Johnson Controls builds its building automation customer base (both organically and from Tyco), another competitive advantage emerges -- an established channel through which it can provide distributed energy solutions. The company is growing stronger by turning inward, looking to leverage its proficiency in batteries to gain yet another edge in the BAS market. In an investor presentation from last December, management discussed its intent to pursue the distributed power generation and storage market.

In one of the first of several planned projects in North America, Johnson Controls is implementing its distributed energy solution in Chicago's Merchandise Mart. The facility has benefited from the company's other solutions to improve its energy efficiency. Paired with the company's energy management strategy, the distributed energy storage solution is expected to reduce this facility's (and others') electricity spending by up to 35%.

Industry experts expect the distributed energy storage market to grow substantially over the next few years. According to Navigant, worldwide revenue from distributed energy storage systems is expected to grow from $452 million annually in 2014 to more than $16.5 billion in 2024. Johnson Controls' proficiency in both BAS and battery technology provide a significant competitive advantage which uniquely positions the company to seize a significant portion of the market opportunity.

The takeaway
In addition to the joint venture and merger, Johnson Controls is spinning off of its automotive business in October. When completed, it will only have two operating segments -- building efficiency and power supply. Granted, there is substantial competition as companies like GE and Honeywell look to grow their BAS businesses and companies like Tesla Motors look to grow in the energy storage market.

Nonetheless, Johnson Controls is uniquely positioned in that it has proficiency in both building efficiency solutions and battery technology. As it provides more solutions which combine these two areas of expertise, the company should prove that it has the ability to succeed in this rapidly growing market.

Is Johnson Controls, Inc. the Internet-of-Things Opportunity You've Been Waiting For?