High dividend yields can be enticing, but these underlying businesses may not be able to sustain them.

Owning strong dividend stocks can be a great way to beat the market long-term. Companies that pay dividends have to focus on cash flows, and that keeps management focused on cash generation and adding value to the business long-term.

But sometimes dividends aren't as stable as investors would like to think. Operations can go south, and if they do for too long dividends can be reduced or even eliminated. Here are three high dividend yields that I wouldn't count on lasting too long.

TerraForm Power
Yieldcos like TerraForm Power (TERP) are built to be dividend machines. The company buys renewable energy projects with long-term contracts to sell energy to utilities, and then pays out those cash flows in the form of a dividend. The problem for TerraForm Power is that its sponsor, SunEdison (SUNEQ), is in a world of financial trouble.

On paper, TerraForm Power should be able to keep up its dividend payment -- but that's assuming the company is acting independently of SunEdison. But that's not necessarily the case. As part of the Vivint Solar acquisition by SunEdison, TerraForm Power is supposed to buy 523 MW of residential solar projects for $799 million, which come with a single digit cash yield and a less stable cash flow than typical contracts with utilities. It'll also further leverage a balance sheet that already has $2.5 billion in debt.

The main reason I think a reduced payout could be in the cards is that it would be best for the business. A 17.3% dividend yield is incredibly high, and the cash could be used to pay down debt, or even buy projects at strong rates of return. I just wouldn't count on this extraordinary payout if I were a shareholder.

But the contract covering Development Driller III, which is currently drilling for BP in the Gulf of Mexico, comes to an end at the end of 2016. And when it does, $422,000 per day in revenue will go with it.

Offshore drilling contracts are tough to come by today, and even if Development Driller III finds a new contract it won't likely be as lucrative as the one it's currently operating under. That could lead to a reduced dividend for Transocean Partners, so investors shouldn't count on the 18% dividend yield forever.

Icahn Enterprises
There haven't been a lot of positive developments lately for Icahn Enterprises (IEP 0.08%). The company's investment portfolio has plummeted (major holdings shown in the chart below), energy bets have gone sour, and the S&P recently warned that its bond rating may be reduced to junk status. 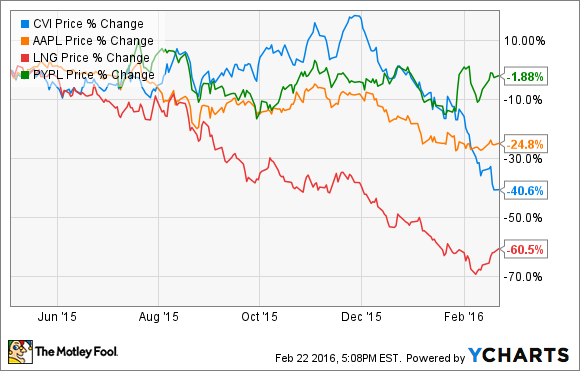 Still, Icahn Enterprises is paying $1.50 per quarter in dividends. I don't think that will last, and after reporting $0.53 per share in losses in the first three quarters of 2015 and paying out $4.50 in dividends it may be time to use cash elsewhere.

One good plan would be to pay down the $4.5 billion due to brokers, or just to maintain a larger cash hoard. Both would be good for borrowing rates until investments in energy and other assets start to improve. No matter what Icahn does with the cash, I don't think a 12% dividend yield will last much longer.

This Renewable Energy Stock's Future Is Now Even Brighter
405%