Our two biggest competitors in the last two decades have been IBM and SAP, and we no longer pay any attention to either one. -- Larry Ellison

The founder of Oracle Corporation (NYSE:ORCL) had some pretty bold words at his keynote speech at Oracle World last fall. He may be right about IBM, but Mr. Ellison may have to eat his words in regards to SAP (NYSE:SAP). Here is how the two stocks have performed over the past year. 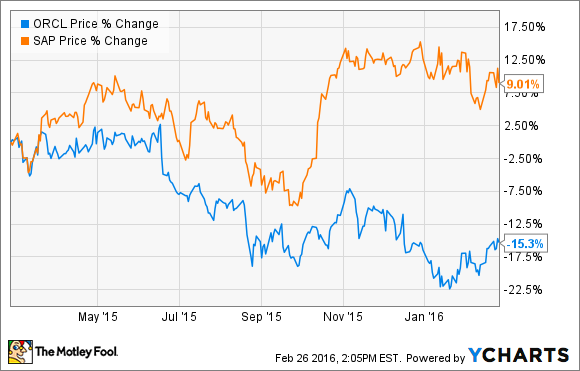 Not only has SAP outperformed Oracle recently, but since Bill McDermott took the CEO reigns in February 2010, SAP stock has increased 77%, outpacing Oracle which is up about 60% over the same period.

When Larry Ellison made his comment, he was referring to the cloud business. He had mentioned that while Amazon Web Services, Salesforce, and Microsoft are seen as competition in the field, "SAP is nowhere in cloud."

There's an old saying that goes something like, "men lie, women lie, but numbers don't." Let's see if the numbers back up Ellison's statements.

SAP and Oracle have fiscal calendars which end at different times of the year, but taking the latest 12 months of results for each company shows that SAP is growing at a much faster rate than Oracle. As a German company, SAP also reports its results in euros. Converting those figures to U.S. dollars results in annual cloud revenue of over $2.5 billion.

Not only is SAP beating Oracle in the cloud, it is doing so by taking a page out of Oracle's own playbook -- making savvy acquisitions. Over the past five years, the software giant has spent $16 billion acquiring SuccessFactors, Ariba, and most recently, Concur Technologies, a travel and expense software provider. All three company's solutions already do or will run on HANA, SAP's application server that includes an in-memory database management solution.

As of the most recent quarter, HANA has been adopted by over 2,700 customers, more than double last year's total. One high profile customer is the NFL, which utilizes HANA to leverage player performance data for the leagues fantasy football product. Analytics tools are also being utilized by the NBA and NHL.

Another success story includes Procter & Gamble, which migrated its database from Oracle to SAP. Implementation of SAP's cloud-based data warehouse application resulted in a 55% reduction in the size of its database and 400% increase in data loading speeds.

With strong momentum in its cloud products and a long-term plan to increase cloud revenue to €7.5 billion to €8.0 billion by 2020, SAP is not stepping off the gas pedal. Oracle should probably pay attention.