The iPhone decline in fiscal 2016 may not be as bad as feared, driving the iDevice maker's stock price up.

Shares of Apple (AAPL 1.37%) have dropped substantially over the past year, shedding nearly 22% of their value during that time. The decline in the stock price comes as the company's iPhone business, which has grown each and every year since its birth in 2007, is on track for its first ever year-over-year unit and revenue decline in fiscal 2016. 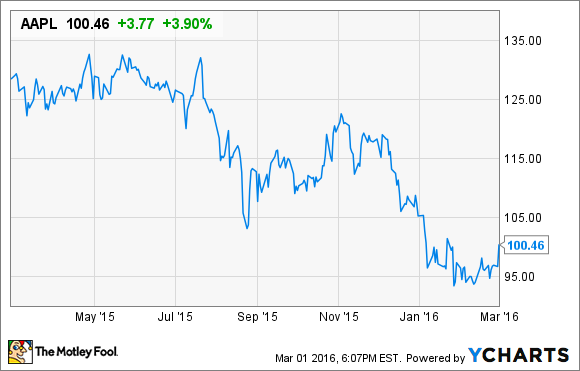 However, although the forex headwinds impact demand outside of the United States, that doesn't explain why Apple saw a 4% revenue decline year over year in North America last quarter. I suspect that a weak showing with the iPhone 6s and 6s Plus is partly to blame.

That said, according to a report from analysts with J.P. Morgan (via Apple Insider), it would seem that the worst might be over for Apple's iPhone business, leading to a surge in the company's stock price.

What's the scoop?
Per the analysts, Apple will ship around 45 million iPhone units in the March quarter, implying a whopping 26% year-over-year decline in unit shipments from the prior-year period. However, the analysts are reportedly expecting Apple to ship 45 million units in the June quarter, apparently up from a prior forecast of a 15% drop sequentially.

Although a shipment figure of 45 million units in the June quarter would still represent a slight drop from the 47.53 million figure in the prior year -- a 5.3% decline -- this is far "less bad" than what Apple is expected to see in the March quarter.

Indeed, Apple CEO Tim Cook did say on the most recent earnings call that the March-quarter results represent the "toughest [year-over-year] compare," implying that he believes that the year-over-year declines should moderate in the June and September quarters.

How many iPhones will Apple sell in fiscal 2016?
Although the J.P. Morgan analysts may have provided their own full-year iPhone estimates in the report, Apple Insider didn't report this. To that end, I'll provide my own based on the J.P. Morgan March and June quarter estimates.

Apple sold about 74.8 million iPhones in the fiscal first quarter. If we assume that the fiscal second and third quarters will come in at around 45 million each, Apple will ship around 165 million units during the first three quarters of the year.

That number would represent a year-over-year decline of about 9% from the blowout shipment figures in fiscal 2015. That isn't ideal, but it's far from the "doomsday" scenario SMBC Nikko Securities recently floated, in which Apple is on track to see units decline by 18% for the full year.

A return to growth in fiscal 2017?
It will be interesting to see if Apple can get iPhone back on a growth path in fiscal 2017. At this point, I firmly believe that Apple's success -- or lack thereof -- in doing so rests squarely on the iPhone 7. If the iPhone 7 is a major leap from the iPhone 6s and 6s Plus and is easily best in class throughout its life-cycle, then a return to growth, even modest growth, seems achievable.

If not, then I fully expect iPhone sales to continue to decline as the current iPhone installed base opts not to upgrade and market segment share gains prove difficult to achieve.