With shares of Devon energy, Agenus, and Total taking huge dips lately, they each have double-your-money potential over the next couple of years.

Peter Lynch, possibly the greatest stock picker ever, loved to call the companies he owned that doubled his money "one-baggers." His portfolio was littered with these as companies made monumental gains over several years. While not every pick he -- or we -- makes will turn out that way, the few that do can make a portfolio.

So we asked three of our contributors to highlight a stock they think has the potential to double an investor's money. Here's what they had to say.

Matt DiLallo
Devon Energy's (DVN 0.26%) stock is down nearly 70% over the past year, significantly more than the price of oil: 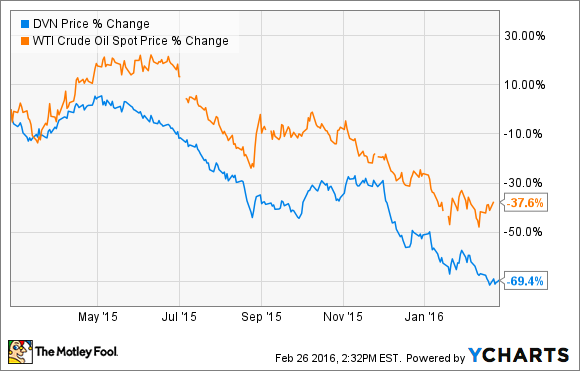 This is really a quite a surprise because operationally Devon Energy is performing very well. Last year, for example, oil production from its core assets jumped 26% while at the same time costs declined substantially, with the company reducing lease operating expenses and production taxes by 20%. Furthermore, thanks to that combination of oil production growth and lower costs, as well as its robust oil hedges, the company generated $5.4 billion in operating cash flow last year, which was more than enough to cover its growth-focused capital spending.

That said, without those oil hedges it would have been a very different story -- in fact, it's the story of Devon Energy in 2016. That's why the company cut both its dividend and capital spending by 75%, so that it can match spending with cash flow this year, while also maintaining a strong balance sheet. Those cuts will result in the company's overall production declining by roughly 6%.

That guidance, however, is based on oil staying around $30 per barrel all year. While that certainly could happen, with as much as oil companies are cutting spending and production this year, it will lead to significant worldwide production declines later this year. That should fuel a rebound in the oil price, taking Devon Energy's stock up with it. In fact, with as steeply as its stock sold off over the past year, it could really rebound sharply if oil prices improve, and could even double if oil were to go back to the $50 per barrel that most shale producers need just to maintain their production.

George Budwell
Given the way shares of the small-cap immuno-oncology company Agenus (AGEN 12.50%) have been performing lately -- down 72% from their 52-week high, according to data provided by S&P Global Market Intelligence -- you might think that something has gone terribly wrong at this tiny drugmaker.

But that's just the thing: This eye-popping downturn isn't the result of a company-specific event. Rather, market sentiment has simply turned against nearly all clinical-stage immuno-oncology companies over the last few months. 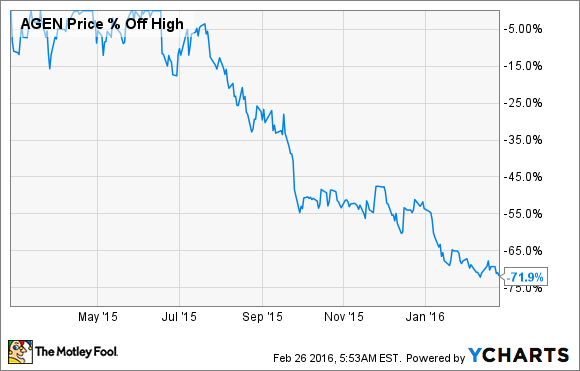 This massive devaluation of Agenus' shares, though, may have created a tremendous opportunity for patient investors. Right now, the company is in the process of initiating early-stage clinical trials for two checkpoint modulator antibodies, AGEN1884 and INCAGN1876, that shouldn't take that long to produce top-line results based on the pace of similar compounds in the recent past.

Although Agenus was perhaps purposely vague about the actual indications of these first two experimental product candidates, the key point is that the company's high-value checkpoint modulator clinical program is finally getting under way in earnest. In fact, management said that it expects to launch several additional trials for its broad checkpoint inhibitor platform in the near future.

The bottom line is that the immune checkpoint inhibitor space is expected to grow at a CAGR of 29% over the next six years running, according to a report by Decision Resources Group. Agenus is thus targeting an ultra-high-growth market that could send its shares soaring if these initial clinical trials go as planned.

Tyler Crowe
It might seem strange to suggest that a big oil company is a place where you might expect to find a stock that could double your money. When you consider, however, that French oil giant Total SA (TTE -0.09%) has seen its shares decline 40% ever since oil prices started to decline in the middle of 2014, then it starts to become a little clearer.

Of all the oil majors, Total has by far been the best performer during the past year in terms of maintaining its earnings power. It has done this in three ways: 1) Bringing on lots of new, low-cost oil production, 2) cutting operational costs at its existing production assets by $1.5 billion, and 3) completing a restructuring of its refining and marketing business just in time to reap the benefits of high refining margins in 2015. So while the rest of its peers have fallen into the red, Total's most recent earnings at today's low prices are only 28% lower than in the same quarter last year.

What this suggests is that when the market for oil and gas does turn, Total is going to be in a position to be a much more profitable company than it was prior to this recent downturn. While I can't say with 100% certainty that Total's shares will double within a couple of years, the company has laid the foundation for a very strong recovery, and investors can enjoy the benefits of a 6% dividend yield in the interim.

3 Dividend Stocks to Buy Hand Over Fist in November

My 3 Favorite Dividend Stocks to Buy in June