In the past year, SunEdison (NYSE: SUNE) stock has plummeted over 90% -- and 50% in the last month, alone. With a meager $475 million market cap left to its name, investors are wondering whether the company is setting itself up for a record rebound, or whether it should be left for scrap. The scenario looked even more dire on Tuesday, when it announced it would delay earnings while undergoing an audit investigation.

But here at The Motley Fool, we make a business of exploring all possible outcomes, however unlikely they may seem to be. So for all the skeptics out there, here are three reasons SunEdison stock could still rise again.

1. Tying the knot with Vivint Solar
In its latest business update, SunEdison's Vivint Solar (NYSE:VSLR) acquisition was front and center. SunEdison has received major flak for stretching its finances thin to acquire company after company in its quest to become the biggest renewable energy player around, and shareholders have paid dearly for this strategy.

Luckily, the company has found some wiggle room with its latest and greatest acquisition -- it backpedaled on its Vivint Solar terms and has since secured a $2--per-share cash reduction in exchange for a $0.75 increase per share in stock considerations.

This new negotiation with Blackstone Group, which owns around three-quarters of outstanding Vivint shares, makes the soon-to-be-acquired company's $1.9 billion price tag look more reasonable. The deal is expected to close in the first quarter of 2016, and if all goes as planned, Vivint Solar and its assets will be spread around SunEdison and its yieldcos as a last hurrah to SunEdison's solar shopping spree. Once Vivint is firmly embedded in SunEdison's business, investors will breathe easier and may even be willing to admit that the expected 9.5% 10-year average levered cash-on-cash yield may even be a good thing for SunEdison.

SunEdison has seen the light and is working to make its cash flow positive and steady. The chart below shows how the company will move cash over the next year (click here and advance to slide 14 for a full-resolution version). 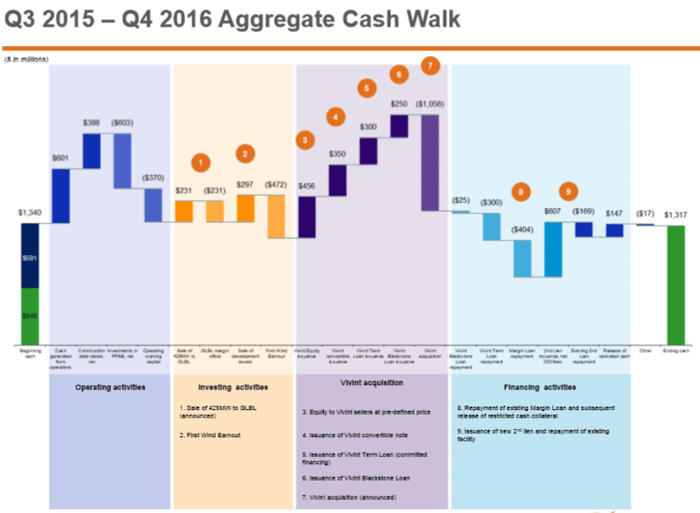 If the company is successful in getting its books in order, investors may just give SunEdison stock another chance.

3. Investors look to longer-term horizons
Solar stocks, in general, have hit a major rut. Over the past year, First Solar has been one of the only solar companies whose stock has offered any gains to shareholders. 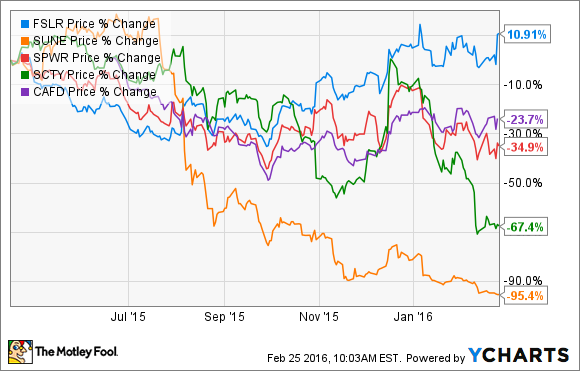 Currently, investors are scared. They're looking for safe havens, and few solar stocks fit that description. If solar companies prove that they can pull themselves out of a burst bubble over the next year, investors may swallow their short-term losses and set their sights on solar's long-term potential. If that's occurs, SunEdison stock may take the spotlight as a value grab in an expanding solar market.

Buy SunEdison?
There are many more reasons that this stock could rise -- but there are also reasons that it could fall even further. Ultimately, investors looking to do anything more than make a risk-filled attempt to time SunEdison's erratic market movements should hold off for now. This solar stock is not for the faint-hearted, and investors should be sure they understand the risks before they add its shares to their portfolio.