Please ensure Javascript is enabled for purposes of website accessibility
Log In Help Join The Motley Fool
Free Article Join Over 1 Million Premium Members And Get More In-Depth Stock Guidance and Research
By Jay Yao – Mar 4, 2016 at 9:00AM

Here are three reasons investors why should stick with BHP in the commodity bear market.

BHP Billiton's (NYSE: BHP) stock has seen better days. Over the past year, BHP has declined 55% while fellow blue chip commodity giant Rio Tinto (NYSE: RIO) has retreated 46%. Unlike Rio Tinto, BHP has substantial exposure to crude oil, whose prices have fallen from $50 per barrel a year ago to under $30 per barrel now. Investors are deeply bearish on crude prices and have, most likely, sold BHP more drastically than its peer because of its exposure to black gold.

Moreover, BHP shares have declined because investors are afraid management will cut the dividend. While BHP does have an "A" credit rating from S&P, the best credit rating in its peer group, there are risks. Its rating is higher Rio Tinto's "A-" and Vale's "BBB-" but S&P recently warned that it might downgrade the company if its cash flows deteriorate further. Standard & Poor's previously downgraded BHP's credit in February 2016 to "A" from "A+" for similar reasons, and BHP management is keen to preserve the company's credit rating to control interest costs. Because commodity prices have fallen further, BHP may have no choice but to cut the dividend if it wants to preserve its credit rating.

Recent events have also made a dividend cut more likely. Because Rio Tinto scrapped its progressive dividend and lowered its 2016 dividend to $1.10 from $2.15 per share, BHP is more likely to cut further. If BHP cuts its dividend shortly after Rio Tinto cuts, BHP management will get less flack from investors.

While BHP Billiton will probably cut its dividend, the company has three very appealing qualities that make it a good long-term buy and hold.

Strong financials
Given the scale and quality of assets, BHP has one of the highest EBITDA margins in its peer group, with a FY 2015 EBITDA margin of 50%. Because its margins are so high, BHP's underlying EBITDA of $21.9 billion for 2015 almost covered its net debt of $24.4 billion. BHP's low net debt-to-underlying EBITDA ratio of 1.11 ensures that it will survive and can acquire other companies if good opportunities present themselves. 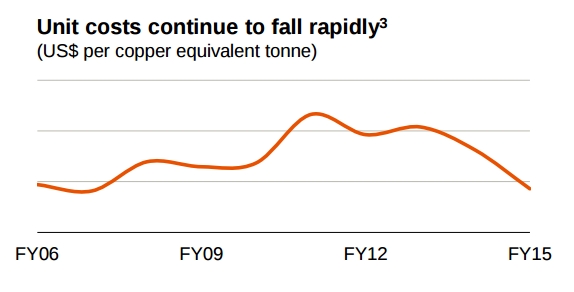 Because the company has realized over $10 billion in annualized productivity gains and the Australian dollar has depreciated versus the U.S. dollar, BHP's unit costs have fallen over 30% from their peak. BHP's costs will continue to decline as the company is in the midst of another billion-dollar cost-cutting initiative. Going forward, management plans to cut its capital expenditures to $8.5 billion in 2016 and $7 billion 2017, down from the $11 billion in fiscal year 2015. BHP's cost cuts and reduced capital expenditures will support its strong free cash flow and increase its earnings per share.

Valuation
Because of the commodity bear market, BHP trades at less than a quarter of its peak price in 2011 and just 0.93 times book value. While the company's book value might be a little overstated because of the commodity decline, BHP still has many of the world's best low-cost, long-life mines that will sustain its production for many years to come. BHP Billiton's break-even for producing iron ore is $28 per tonne, for example, versus Rio Tinto's $29-$30 per tonne. Despite the capital expenditure cuts, management believes they have medium term options that will increase the company's average annual production volume by 5% through the cycle, as well.

Investor takeaway
The past three years have been very challenging for the commodity industry. Crude prices have fallen to lows not seen since 2003. Iron ore prices have fallen to levels not seen in over 10 years. Although its shares haven't done so well, BHP's stock trades at a compelling valuation in relation to its book value and to its normalized earnings power. While its stock price can still fall, the company will bounce back as demand from India and emerging markets grow. For all of these reasons, BHP has a lot of upside left and is a great stock to buy and hold for the long term.