The company had a decent year but its big expansion plans are what's pushing it forward.

After closing January at $39.36 the company's stock rallied throughout the month (though not quite steadily) to close on Feb. 29 at $46.58, an 8.34% gain, according to data provided by S&P Global Market Intelligence. 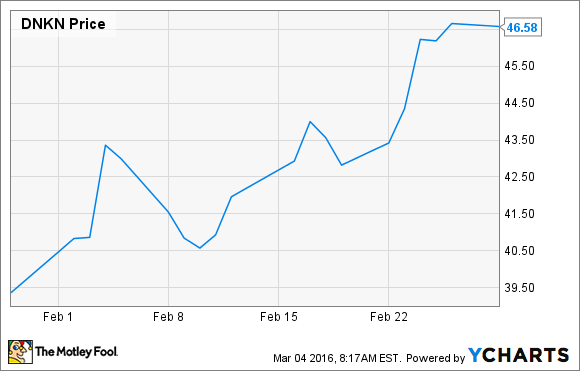 What: The coffee chain reported Q4 and full-year results on Feb. 4. Those numbers were relatively encouraging with Dunkin' Donuts locations showing Q4 comparable store sales growth of of 1.4% for the full year, despite a 0.8% drop in the quarter. The company's Baskin' Robbins brand posted 6.1% comparable store growth for the year and a 4.4% gain in Q4.

Dunkin' also added nearly 200 new stores globally during the quarter and its the chain's continued expansion efforts which really caused its stock to pop. Shares began a steady climb up after a Feb. 11 press release about continued expansion in existing and new markets in Europe.

So what: Dunkin' is still relatively small compared to some of its fast food and fast casual rivals (about 11,700 restaurants in 43 countries) and its growth prospects are strongest outside of its core northeast United States market where it may have reached full market penetration. In Europe the company opened 55 new locations in 2015 and it has big plans going forward.

The company is looking for European partners with extensive retail and foodservice experience with the financial wherewithal to open a minimum of 20-35 Dunkin' Donuts restaurants in their market over the next several years.

Now what: Intentions are great, but in 2016 the chain has to deliver. That means finding solid franchise partners which can help it rapidly grow across Europe. The company has laid a path for that and has shown that its brand has appeal outside of the United States. Now it simply has to execute and show that it can handle rapid growth along with managing the nuance required in each new market.

Daniel Kline has no position in any stocks mentioned. He prefers Dunkin's iced coffee, even in winter, which is a Boston thing. The Motley Fool has no position in any of the stocks mentioned. We Fools may not all hold the same opinions, but we all believe that considering a diverse range of insights makes us better investors. The Motley Fool has a disclosure policy.