The beleaguered upstream MLP has more than doubled since bottoming early last month.

Units of LINN Energy (LINEQ) were eviscerated last month after it appeared to be throwing in the towel by maxing out its credit facility and announcing it was exploring "strategic alternatives" relating to its capital structure. The market saw that as code that bankruptcy is on the horizon. However, in recent days LINN Energy's units have skyrocketed, and are up more than 100% after hitting bottom days after that announcement. Here's why the market is starting to hold out hope that bankruptcy might not be in the company's future.

A roughed up rival receives a helping hand
One of the primary's fuels behind LINN Energy's recent rally is news that fellow left for dead peer Ultra Petroleum (UPL) was able to negotiate a waiver agreement with its lenders to buy it time to continue restructuring its debt. Ultra Petroleum, which warned in its fourth-quarter report that it was on the brink of filing for bankruptcy, was given a pass preventing it from defaulting on looming credit obligations. Specifically, it's lenders agreed to postpone and defer $100 million in upcoming maturity and interest payments, enabling it to preserve liquidity and buy it more time to work out a deal with creditors. It's a move the market is cheering, sending Ultra's stock up more than 300% this week.

While that move didn't remove the near-term bankruptcy risk for Ultra Petroleum, it did at least postpone it for the time being. That's important for LINN Energy and every other beaten down oil stock because it suggests that lenders are willing to give oil companies more time to work out their credit issues instead of forcing them into bankruptcy.

Oil prices are showing signs of life
The price of oil has also been an important fuel driving LINN Energy's recent ascent, with crude oil ripping higher off its bottom in the mid-$20 range earlier last month: 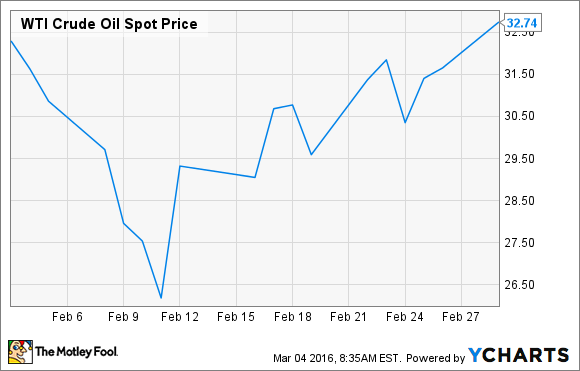 There are two things fueling the recent oil price rally. First, several OPEC members are working with non-member Russia to freeze oil output at January levels. Such a move is designed to prevent oil supplies from growing any further, and in particular to mute the expected rise of Iranian crude oil exports due to the lifting of western sanctions. While not everyone is in agreement on that move, the market sees it as the first sign that OPEC would like to put a firm bottom in the price of oil.

In addition to that oil production in the U.S. is clearly starting to decline. This is after oil companies slashed capital spending to such a degree that they can no longer hold production flat, let alone grow it. For example, Marathon Oil (MRO -0.61%), which grew its oil production by 8% last year even after cutting spending by 50% from what was spent in the prior year, is slashing its capex budget by 50% more this year leading to an expected production decline of 6% to 8% over last year's average. Marathon is but one of the dozens of examples of U.S. oil companies that have cut spending to the point where they can't maintain their current output level. When added together, this is expected to cause U.S. oil production to decline from 9.4 million barrels a day last year to 8.7 million barrels a day this year, according to the U.S. Energy Information Administration.

The frozen capital markets are starting to open
Because the price of oil has seemed to stabilize in recent weeks, investors are starting to open their wallets to energy companies. A number of energy companies, including Marathon Oil, have been able to access the capital market to issue debt or equity with more than $11 billion in equity and over $12 billion in debt being issued over the past few weeks. In fact, companies are finding a healthy appetite for new equity with Marathon Oil up-sizing its offering from 135 million shares to 145 million shares due to strong investor demand. This might just have cracked open the door for LINN Energy to access the capital market or sell assets at less than fire sale prices now that its peers have some cash to work with.

Investor takeaway
There's a slight ray of hope shining on LINN Energy right now. That said, there's a big difference between hope and action, with the company really needing the latter to give it any real hope for a viable future. So, until it is able to actually seize the opportunity to fix its balance sheet woes, the company's future still remains very much up in the air.

Matt DiLallo owns shares of Linn Energy, LLC. The Motley Fool has no position in any of the stocks mentioned. We Fools may not all hold the same opinions, but we all believe that considering a diverse range of insights makes us better investors. The Motley Fool has a disclosure policy.