Past performance is... probably your best guide to future success.

Military math
How is this possible? How is it that the U.S. spending less money on defense results in higher profits for three of America's biggest defense contractors? Here's one clue: Raytheon, General Dynamics, and Lockheed Martin are three of the four U.S. defense contractors that do the most business abroad.

It's been a couple of years since we last looked closely at this dynamic -- the phenomenon of U.S. defense contractors, starved for revenues at home, looking beyond U.S. borders to grow their businesses. But even as far back as 2014 the trend was already evident. Growing demand for weapons in the global hotspots of the Middle East and Southeast Asia and the Pacific, was creating new markets for U.S. weapons makers, even as the domestic market for arms wilted under the pressure of the Great Recession, and the Sequester enacted to help cure it.

What may surprise you even more is that the trend we highlighted in 2014 isn't just going strong here still in 2016. It's growing. With defense contractors having just finished reporting earnings, and filing their 10-K reports with the SEC, I took the opportunity to conduct a detailed review of which defense contractors are getting their revenues from which countries.

Here's what I found:

What these numbers mean
There are a couple of broad conclusions we can draw from the data we're seeing above. First and foremost, the Asia/Pacific arms market is one of the most important in the world for defense contractors. For naval forces alone -- let alone land and ground forces -- analysts at AMI International predict this region will be the second-hottest market for maritime weapons-buying over the next 20 years, accounting for as much as $200 billion in sales.

Right now, Raytheon is doing the best job of capitalizing on this market, deriving more than 10% of its companywide sales from Asia. Rival contractors L-3 Communications and General Dynamics, however, have also recognized the region's potential, and are moving fast to imitate Raytheon's success. (Lockheed Martin and Northrop Grumman do not break out their arms sales by region -- but if you want to guess that they are interested in this market as well... well, I think that's probably a safe guess.)

In fact, it's less a guess and more a fact. As you can see in the chart above, it's clear that all the major defense contractors are taking active steps to grow the international side of their businesses. Again, L-3 and General D are making the greatest strides here, with Raytheon not far behind.

What these numbers mean to investors in particular
"Past performance is no guarantee of future results." Pick up any investment prospectus, from just about any company in the stock market, and you're likely to read that blanket disclaimer somewhere in the boilerplate.

And yet, when you see a steep drop in U.S. spending, a gravity-defying rise in profits, and all of this happening in the context of defense contractors taking their businesses international, I think the pattern looks pretty clear. And it looks a lot like the stock price chart below. If you're looking to find your next winning defense stock -- look no further. 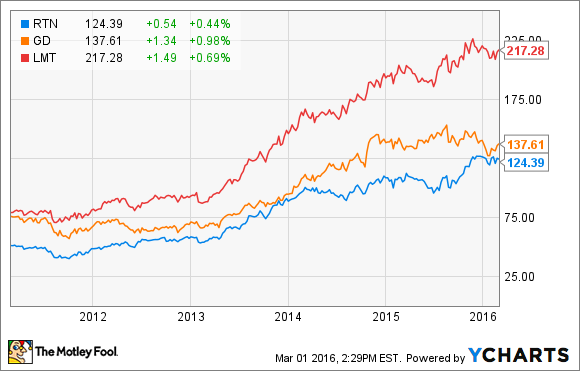 Rich Smith does not own shares of any company named above. You can find him on Motley Fool CAPS, publicly pontificating under the handle TMFDitty, where he's currently ranked No. 270 out of more than 75,000 rated members.