Traders sold-off the company's stock after it reported a mixed quarterly earnings report.

What: Shares of Raptor Pharmaceuticals (NASDAQ: RPTP), a biopharmaceutical company that focuses on creating treatments for rare diseases, had a rough February, as the company's stock lost 13.1% of its value during the month, according to data from S&P Global Market Intelligence. 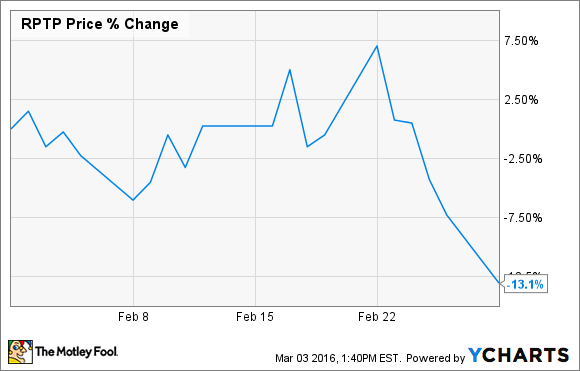 So what: A disappointing fourth-quarter earnings report appears to be the primary reason why shares swooned during the month. Raptor reported revenue of $24.7 million for the period, driven entirely from sales of Procysbi, the company's treatment for nephropathic cystinosis. While that represented growth of more than 43% when compared to the year-ago period, it came up a bit shy of the more than $26 million in revenue that Wall Street was expecting.

On the plus side, the company did a good job at controlling expenses during the period as its adjusted net loss of $0.17 per share was $0.01 better than analyst estimates. The company also ended the year with more than $157 million in cash on its balance sheet.

Looking beyond the headlines, Raptor was able to close on its acquisition of Quinsair during the quarter, which is a drug that helps adults with cystic fibrosis manage their chronic pulmonary infections caused by Pseudomonas aeruginosa. Quinsair is already approved for sale in Europe and Canada, and Raptor confirmed that it anticipates launching Quinsair in Europe sometime in the second quarter of this year, and in Canada soon after.

Now what: Like many other small-cap biopharmaceutical companies, Raptor's stock has had a rough start to 2016. Shares have shed more than 22% of their value since the start of the year, a terrible performance in absolute terms, but is roughly in line with the performance of biotech stocks, in general, as measured by the First Trust NYSE Arca Biotech Index (FBT 0.75%). 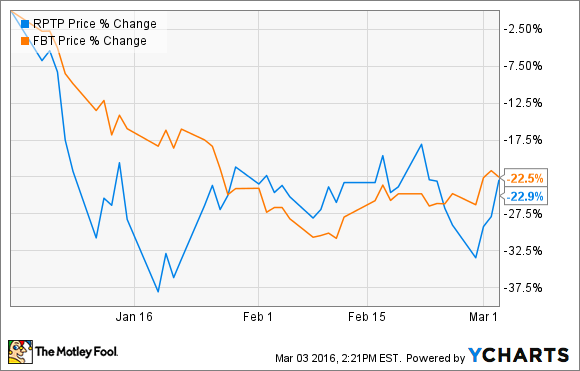 Despite the stock's dismal performance, there could be reasons for investors to be optimistic about the company's chances from here. Management is forecasting that Procysbi will grow by around 25% in 2016, and that the company's total revenue will land between $115 million to $125 million for the full year. While that still won't be enough to make the company profitable, Raptor's huge cash hoard should help to ensure that it won't need to raise capital anytime soon.

Investors also have several catalysts to look forward to during the year, which include the potential approval and launch of Procysbi in Canada, the launch of Quinsair in both Europe and Canada, a potential NDA filing for Quinsair in the U.S., and a handful of clinical data readouts from its other pipeline products. Whether or not any of those events translate into market performance for the company's stock remains to be seen, but at today's prices, one could make the argument that Raptor's stock is cheap enough that there could be upside potential if the company reports positive news.