A phase 2 failure in the middle of a biotech meltdown has been tough on Raptor Pharmaceuticals' (NASDAQ: RPTP) stock. The shares have lost over 70% since their lofty peaks last June.

While the stock might be as volatile as a clinical-stage biotech, this rare-disease drugmaker is actually generating sales with a commercial-stage product. Last year, the company's annual revenue expanded 36% to $94.2 million and is expected to reach $115 million to $125 million this year.

Clearly, something seems amiss. If this is simply a market overreaction, Raptor could be a buy for long-term investors willing to ride out this wave of industry pessimism. Let's take a closer look to see if this stock's seemingly low price is justified.

Pay for delay
Raptor's main source of revenue is Procysbi, which treats nephropathic cystinosis. This is an extremely rare genetic disorder where the amino acid cystine builds up in cells and causes widespread organ damage. Left untreated, it typically results in childhood kidney failure.

Cystinosis has long been treated with the cystine-depleting agent cysteamine bitartrate. This treatment was first introduced as a foul-tasting syrup, and compliance was an issue. In 1995, Mylan began marketing a pill form, Cystagon. About $140 can buy you 400 50 mg capsules. The trouble is, Cystagon requires dosing every six hours.

You're probably all familiar with extended-release pills costing far more than their standard versions, but I don't know of any that take it to this extent. Raptor's Procysbi is a delayed-release capsule of cysteamine bitartrate that makes it past the stomach into the small intestine. This makes a big difference in the rate of absorption and allows dosing every 12 hours.

While I'm sure parents appreciate not having to wake their children up in the middle of the night to get them to swallow a bunch of pills, at $17,812.50 for a bottle of 250 75 mg capsules, that convenience is awfully expensive. The recommended maintenance dosage for child weighing about 50 pounds is eight 75 mg Procysbi pills, twice per day, costing insurers over $416,000 per year.

Expanding Procysbi
Nephropathic cystinosis is so rare that Raptor estimates less than 500 U.S. patients are eligible for treatment with Procysbi. After winning FDA approval to market Probysci in the spring of 2013 for adults and children 6 and older, Raptor has had an excellent commercial-stage execution. In its first full year on the U.S. market (2014), it reached sales of $69.5 million. A label expansion to include children between 2 and 6 years of age last August led to 43% sequential growth from the third quarter to the fourth.

It has also tried Procysbi in the underserved Huntington's Disease population. Results from a phase 2/3 trial presented last year were underwhelming, but the company does plan to move forward with a registrational trial.

Procysbi is generally well tolerated, with limited side effects. Given the lack of disease-modifying therapies for Huntington's disease, I wouldn't entirely rule out an eventual approval if it can show a significant benefit in a redesigned phase 3 trial. Given what we've seen in phase the 2/3 though, I'd say its chances of commercial success in Huntington's are slim to none.

Raptor is also trying Procysbi in mitochondrial disease with a 12-patient phase 2 trial. Interim data expected in the second quarter might be worth a look, but I think the use of the cystine-depleting agent will remain limited to patients with cystinosis.

Beyond Procysbi
Last October, Raptor finally acquired another rare disease drug, Quinsair, from privately-held Tripex Pharmaceuticals. The inhaled antibiotic for management of lung infections in adults with cystic fibrosis is already approved in the EU and Canada, but the FDA hasn't approved it in the U.S.

Quinsair's previous approvals make it seem like a great deal for about $34 million, but the deal is heavily backloaded. If it jumps through all the developmental, regulatory, and commercial hoops ahead of it, Raptor could end up paying an additional $350 million for the drug, along with a single digit royalty. More frightening is an undisclosed portion of those milestones can be paid for with stock, at Raptor's discretion. Given its extremely low share price at the moment, if it needs to make those payments and is strapped for cash, those milestones could heavily dilute the company's outstanding shares.

Quinsair is the first inhaled form of fluoroquinolone, but ingested and injected generic forms of the antibiotic have been marketed for years. A few years back, the FDA required makers of fluoroquinolone to add warnings of possibly permanent nerve damage to its label. Back in 2008, its association with tendon injuries in older patients earned it a boxed warning, the FDA's most severe.

If approved in the U.S., Quinsair will contend with inhaled forms of the antibiotic tobramycin, marketed as Tobi from Novartis, and a generic version from Teva Pharmaceuticals for cystic fibrosis patients with the same infection.

Putting it together
Raptor's currently low price is compelling, but there's a reason it's so low. It has yet to turn a profit, and the seven years of orphan exclusivity for Procysbi in the U.S. expires in 2020 (and 2022 for the more recent expansion to children ages 2 through 6). In the EU, where it fetches a fraction of the price it does in the U.S., its orphan exclusivity expires in 2023.

Granted, cystic fibrosis is a larger indication, with an addressable population in the U.S. of about 30,000. Eventual FDA approval for Quinsair seems reasonable, but I doubt it will overcome inhaled tobramycin as the go-to inhaled antibiotic for cystic fibrosis patients -- especially if it's priced similarly to Procysbi. However, there is a niche within the cystic fibrosis population that has developed resistance to tobramycin.

At Raptor's currently low price, it may seem all the risks are priced in, but I'd argue they're not. Raptor needs Procysbi to continue performing and Quinsair to catch on quick. Excellent commercial execution with Procysbi suggests success with Quinsair is possible, but becoming significantly profitable as a company is another matter. 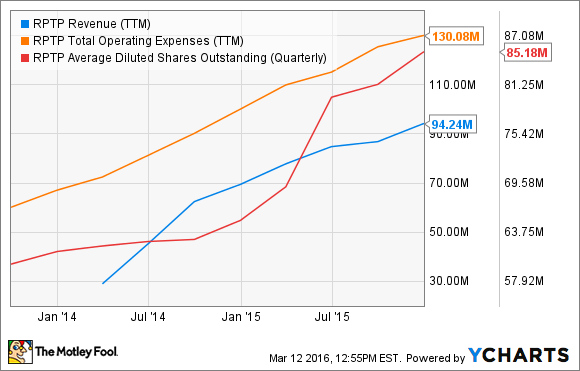 Both operating expenses and outstanding shares of Raptor have risen right along with sales over the past few years. Most frightening of all, its debt obligations are beginning to pile up. It spent $15 million servicing debt last year, and $60 million in convertible notes mature in 2019.