One Detroit automaker took an steep and surprising slide, but it wasn't due to problems under the hood.

It's no secret that automakers competing in the U.S., as well as globally, want to attract younger and more affluent customers. The good news for them is that technology and infotainment systems, which connect your car to your smartphone or other mobile devices, continue to attract both types of consumers to dealerships. But there's a downside.

Many of these technologies are buggy, and are driving up the number of reported problems with vehicles. That's apparent in J.D. Power's recently released Vehicle Dependability Study. Here's a look at how automakers stacked up in the rankings, and why it matters.

Concerns for automakers
According to J.D. Power, more than 50% of owners cite expected reliability as one of the most influential factors in their decision to purchase a specific make and model. That means automakers making big moves up or down the reliability rankings are going to be noticed, which could have a direct impact on sales and market share.

Unfortunately, thanks to the rapid expansion of technology inside vehicles, the problems with infotainment systems, navigation and in-vehicle communication systems now account for 20% of all consumer complaints in J.D. Power's study. That means one stumbling attempt at a tech upgrade, such as Ford's much-maligned MyFord Touch interface, can send an automaker absolutely plummeting in the rankings. 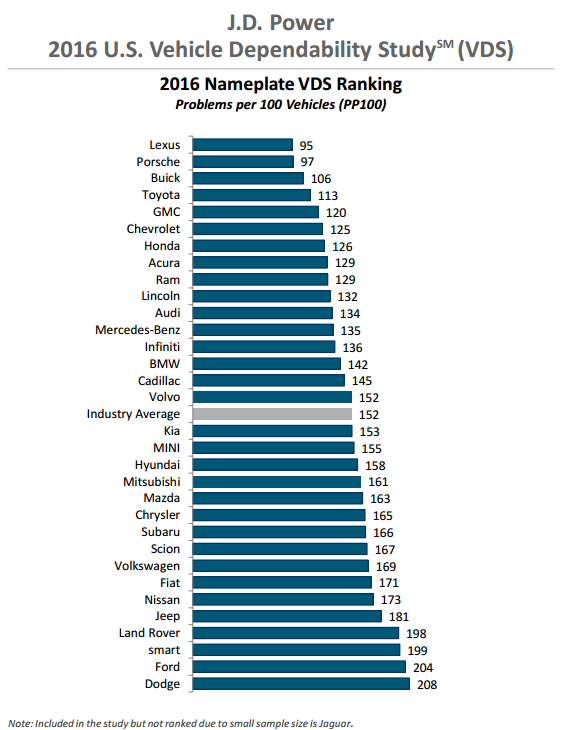 One of the biggest winners was General Motors (GM -1.53%). Not only was GM's Buick the highest-placing domestic automotive brand, it was the highest-ranking non-luxury brand, with 106 PP100. Surprisingly, GM's GMC and Chevrolet brands weren't too far behind, ranking fifth and sixth, respectively. Of course, in an apparent attempt to flip expectations on its head, GM's luxury brand, Cadillac, was its worst performer, checking in just barely above the industry average in 15th place.

While GM's success might surprise a few folks, Toyota Motor Corp.'s (TM -0.72%) high scores in a vehicle dependability study probably won't. Toyota's Lexus brand was ranked No. 1 for a fifth consecutive year, with a score of 95 PP100. The vehicles taking home segment awards for Toyota were the Lexus ES, GS and GX. Its namesake Toyota brand -- ranked No. 4 -- won awards for the Prius v, Sienna and Tundra.

The bottom of the rankings, on the other hand, was littered with brands of all shapes and sizes -- both surprising and not-so-surprising names -- including Toyota's Scion brand.

Ford Motor Co. (F -1.48%), which typically doesn't rank this low in quality studies, placed second-to-last with 204 PP100, ahead of only Dodge, which had 208 PP100. Ford's luxury brand, Lincoln, managed to work itself into the last spot of the top 10. However, in my opinion, Ford will continue to lag behind in these rankings until its highly anticipated SYNC 3 infotainment system is present in the vehicles being studied. That lifeline is roughly three years away, since SYNC 3 is just now being launched in new vehicles.

On the other hand, Fiat Chrysler Brands tend not to do so well in these surveys. Beyond Dodge's last place finish, its Jeep and Fiat brand were only ranked a few spots higher at 28th and 26th, respectively. The bright spot for FCA brands was its Ram truck brand, which managed to squeeze its way into the top 10 at No. 9.

What's it all mean?
First, while J.D. Power does excellent work in all of its studies, this one requires consumers to take other factors into consideration because it's studying model-year 2013 vehicles -- and so much can change in vehicles so quickly. If you're looking for a new vehicle model, you shouldn't use this ranking as the be-all and end-all.

Furthermore, as consumers continue to demand more technology, better connectivity, and more impressive infotainment systems, be prepared to see the flip side of that coin -- tech upgrades that can be buggy and at times frustrating. Owners of newer vehicles are going to see many more small issues pop up. Keep it in perspective, though, because the difference between a transmission issue and an infotainment system that has trouble connecting to your new smartphone is a large one.

With all of that said, data like J.D. Power's Vehicle Dependability Study is crucial for investors trying to keep their fingers on the pulse of the automakers they own shares of. Competition in the industry is intense, and a consistent slip in these types of studies can make it difficult to gain market share or expand sales in a market that could be peaking in the near term.