The midstream company’s merger partner reportedly was getting cold feet.

So what: Williams Companies and its MLP, Williams Partners (NYSE: WPZ), were rocked in early February with news that the CFO of its merger partner was being replaced. 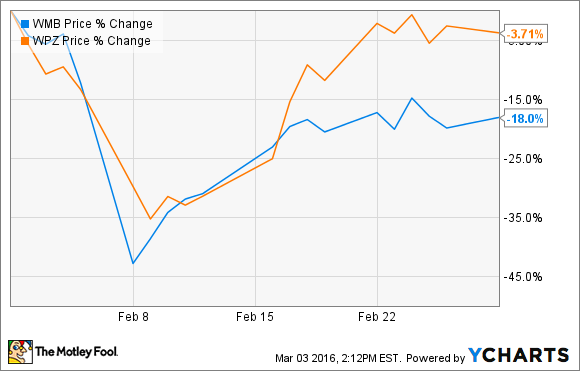 Some investors saw the move being related to the merger, suggesting that it was possibly fallout for a deal that's not turning out to be the best idea. In fact, the merger has rumored to be on the brink of falling apart pretty much since the get-go because of the deepening energy market downturn and the impact it's having on both cash flow and credit availability within the sector. Yet the deal continues to move forward, with Williams Companies' board of directors affirming its commitment to the transaction in late February. However, its merger partner doesn't appear to be quite as committed, with reports surfacing at the end of the month that it had considered offering Williams Companies $2 billion to walk away from the deal. While the offer was never presented, that it thought about walking away only adds to the drama and stock price volatility.

In addition to all that merger drama, both Williams and Williams Partners reported fourth-quarter results last month. Overall, the reports were OK, with a 36% year-over-year increase in fee-based revenue at Williams Partners helping fuel stronger cash flow. But despite that strong cash flow, both companies reported weak distribution coverage ratios of 0.91 at Williams Companies and 0.99 at Williams Partners, implying that each is paying out more than they earn. That's a problem, because it adds to concerns that their distributions could be cut if conditions don't improve.

Now what: Right now, uncertainty at Williams Companies is at its peak, because its merger agreement seems to be on the rocks. It's a situation that won't go away until the deal either closes or both companies officially agree to terminate it. More than likely, they'll let investors decide, with the shareholder vote holding the key to whether this deal gets done. Either way, Williams investors still face uncertainty because the downturn in the oil market is affecting cash flow at its MLP as well as the namesake MLP of its merger partner. So even after the merger drama is over, the market still has to deal with the drama from the oil market downturn, which could continue for quite some time.