The auto parts maker has upside potential following its difficult start to 2016 on the markets.

If you own a stock with significant exposure to the automobile industry, you will already know that the sector has been hit hard in 2016. In a nutshell, investors have sold off auto-related stocks on fears that global auto demand is set to falter in 2016. As you can see below, auto parts makers like Delphi Automotive Plc (DLPH) have been beaten up. But are fears overdone?

Here are three reasons Delphi stock can rise from here. 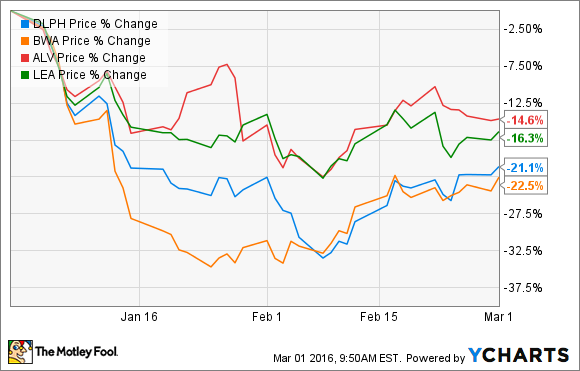 1. The market is too bearish on autos
Frankly, it's very difficult to know exactly where global auto sales and production will go in 2016, but that doesn't mean you should automatically fall into the kind of bearish stance so many are taking on it. The following graphic shows Delphi's end market assumptions for 2016. 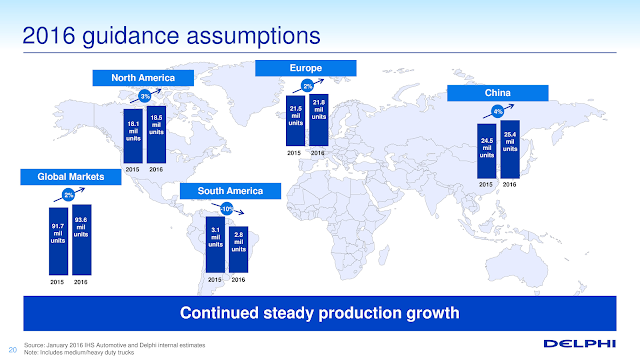 Management is predicting global unit production growth of just 2%, so it's reasonable to say the company's guidance for 2016 is similarly conservative.

The bearish case sees U.S. production forming a plateau, EU demand faltering because of a weak economy, and China relapsing into decline after the positive effects of the halving of a purchase tax on vehicles with smaller engines (below 1.6 liters) start to wear off.

However, the latest sales figures from each region are not supporting the bearish case. For example, U.S. auto sales were strong in February, with Ford reporting a 20% increase in auto sales, Fiat Chrysler Automobiles auto sales up 12%, and Nissan up 10.5%. Meanwhile, EU car registrations increased 6.2% in January, 16.6% in December, and 13.7% in November.

New car sales were up 9% in January in China, and the German automobile association VDA recently raised its forecast for car sales in China to rise 6% in 2016, compared to a forecast of 2% given in December.

Investing takeaway: Delphi has upside because the global auto market has proved stronger (so far) than many thought it would be in 2016.

2. There is ongoing growth in technology in cars
Delphi Automotive is well positioned to benefit from the continuing trend toward increasingly sophisticated cars. For example, nearly 64% of segment profit in 2015 came from its electrical architecture segment, compared to just 9% from powertrain. Moreover, at the recent Barclays Industrial Select Conference, Chief Technology Officer Jeff Owens outlined how the increasing demand for in-vehicle infotainment solutions would drive growth in the company's software solutions. In fact, he expects 40% of the "jump" in software growth to come from infotainment, compared to 20% from powertrain and 20% from active safety.

Investing takeaway: Delphi has secular growth prospects from growth in infotainment and electronics in cars.

3. Electrification benefits Delphi
As noted above, Delphi makes most of its profit from electrical architecture, and this gives it an edge if electric vehicles become more widely adopted in the marketplace. For example, here is CEO Kevin Clark speaking on the recent fourth-quarter earnings call:

We're starting to see more demand, more of a ramp-up in vehicle electrification including things like 48-volt. Those are very good for us. So 48-volt hybrid content is four times to five times the content that we have on a traditional car; full EV is seven times the content.

He promised to talk more about its 48-volt products at the company's investor conference in April -- something to look out for.

Investing takeaway: If the move toward electrification gathers pace in 2016, Delphi will be a winner.

The bottom line
Ultimately, the stock price will be governed by global auto sales trends, but as discussed above, Delphi is also a beneficiary of secular growth trends such as increasing electrification of vehicles and usage of technologies such as infotainment. It's all part of the increasing intellectual quotient in a car's value.

Provided auto sales hold up -- and the current evidence is positive -- then Delphi stock can recover from its horrible start to 2016, and buying in now will prove a timely decision.