If you can't compete on price or service and have a reputation for not treating consumers well, then a rival that's making plans to come to one of your markets represents a disaster of the highest order.

That's why AT&T (NYSE:T) is pulling out all the stops in Louisville, Ky., in an attempt to stop Alphabet's (NASDAQ:GOOG) (NASDAQ:GOOGL) Google from gaining access to its utility poles to speed up the rollout of Google Fiber. The wireless carrier and Internet service provider filed a lawsuit to stop a new rule, which the Louisville/Jefferson County Metro Government has passed, from going into effect.

The ordinance, "One Touch Make Ready," would allow multiple providers to use the city's utility poles another company manages. That would let Google, which has identified Louisville as a potential market, enter the city without having to build as much infrastructure. Of course, that would speed the process for Google Fiber and would give consumers more choice.

AT&T, as you might imagine, doesn't agree with the new rule and has filed a lawsuit, which TV station WDRB posted on its website, trying to stop the ordinance. Alphabet/Google Fiber, of course, thinks the suit is without merit and posted its own response. 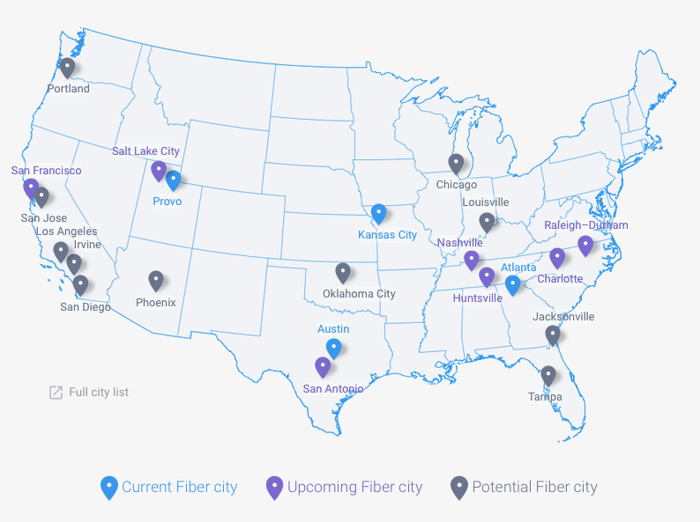 What is AT&T suing over?
In a statement to a local business news publication, AT&T defended its position and explained why it took the issue to court.

"Louisville Metro Council's recently passed 'One Touch Make Ready' Ordinance is invalid, as the city has no jurisdiction under federal or state law to regulate pole attachments," AT&T said in a statement to Louisville Business First. "We have filed an action to challenge the ordinance as unlawful. Google can attach to AT&T's poles once it enters into AT&T's standard Commercial Licensing Agreement, as it has in other cities. This lawsuit is not about Google. It's about the Louisville Metro Council exceeding its authority."

Pole attachments are generally allowed under the current system, but the new rule makes the process easier, requiring less back and forth between companies. For example, the ordinance would allow Google, or another provider, to access the poles without notifying AT&T. The company objected to that provision strenuously in its lawsuit:

Basically, the new ordinance doesn't require new providers to tell AT&T they're accessing the poles if doing so isn't likely to have customers notice or to result in outages. That provision would speed Google's launch and bring residents another choice faster.

What is Alphabet saying?
Chris Levendos, director of national deployment and operations for Google Fiber, expressed his support for the ordinance, which, as he noted in a blog post, the council passed unanimously. He said he believed the "One Touch Make Ready" would speed the process of getting high-speed fiber Internet service to citizens there, and he expressed his company's "disappointment" over the AT&T lawsuit.

"Google Fiber stands with the City of Louisville and the other cities across the country that are taking steps to bring faster, better broadband to their residents," he wrote. "Such policies reduce cost, disruption, and delay, by allowing the work needed to prepare a utility pole for new fiber to be attached in as little as a single visit -- which means more safety for drivers and the neighborhood."

He explained that the new rules would allow the work to be done by a team of contractors that the pole owner itself has approved, instead of having multiple crews from multiple companies working on the same pole over weeks or months.

"One Touch Make Ready facilitates new network deployment by anyone -- and that's why groups representing communities and fiber builders support it, too," he wrote.

Who will win?
It's worth noting that AT&T has its own plans to offer fiber service in Louisville and that the company would gain an advantage in doing so if it can be first to market. AT&T's lawsuit looks to be an attempt to stall a rival, as the company did ask for an injunction against One Touch Make Ready.

The company has also put itself in conflict with the city's mayor, Greg Fischer, who took to social media to object to AT&T's actions.

"We will vigorously defend the lawsuit filed today by ATT; gigabit fiber is too important to our city's future," he wrote.

Ultimately, it seems unlikely that AT&T will prevail even if it wins the court case. You can't fight progress with stall tactics forever, and the best move for AT&T -- and the residents affected -- would be to compete by offering a better fiber product than Google. It's also never a good idea to poke at Alphabet, because it seems likely that this lawsuit, which has galvanized support for Google Fiber in the area, will move the market from the list of cities it's considering to the ones it plans to enter.