By the end of the month, SunEdison could have absorbed Vivint Solar, filed for bankruptcy, or anything in between.

SunEdison Inc (SUNEQ) and Vivint Solar (VSLR) have been linked since last summer, when Vivint agreed to be bought out by the larger SunEdison. Today, their link is a cautionary tale of how quickly renewable energy growth plans can go wrong. 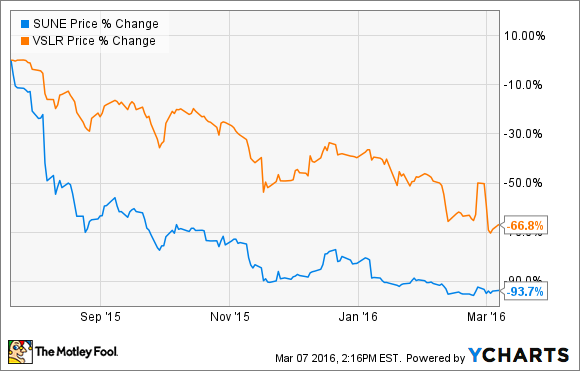 Pressure surrounding their potential merger is coming from all sides. Billionaire David Tepper is trying to get TerraForm Power (NASDAQ: TERP) out of buying rooftop solar assets as part of the Vivint Solar deal. Canceled acquisitions have cost SunEdison tens of millions, and the company can't even execute on its existing project pipeline. Add all of this up, and completing the acquisition looks less and less likely by the day.

Tepper adds pressure to SunEdison
The first big hurdle for Vivint Solar to overcome is the aforementioned lawsuit put forth by hedge-fund manager David Tepper. He's trying to block SunEdison from transferring 523 MW of operating assets to TerraForm Power for $799 million as part of the Vivint Solar acquisition. The judge in the case didn't allow a request for a stay, but did allow a fast-tracked trial and said the deal was "inherently suspect" and that the court could essentially undo the transfer if Tepper wins at trial.

Without TerraForm Power, SunEdison would either have to back out of the Vivint Solar acquisition, or somehow come up with the funds to complete it and maintain its development pipeline at the same time.

Adding uncertainty to the acquisition, SunEdison delayed filing its annual earnings report because it's investigating accusations of a worse-than-disclosed financial position. Banks have also reportedly balked at financing the acquisition. All of this uncertainty is obviously bad news for SUNE.

March could be key for Vivint Solar's future
It's a big month coming up for SunEdison and Vivint Solar. SunEdison has to file its 10-K by March 15, or there will be even bigger questions about the company's financial viability. March 18 is when either SunEdison or Vivint Solar can back out of the acquisition, which may be a good or a bad thing for both companies, depending on how you look at it.

There's also increasing concern that SunEdison could be heading into bankruptcy before any of this comes to a head. That may be the biggest reason banks are backing out of financing the Vivint Solar deal.

What would Vivint Solar do without SunEdison?
If SunEdison's acquisition of Vivint Solar falls through, it may not be all bad for the residential solar company. The residential solar market is now more sustainable long term than it was a year ago, given the extension of the solar investment tax credit and more stable long-term net metering rules in states like California. There may have to be adjustments to financing or sales strategies, but this isn't an unsustainable company that would be lost without a buyer.

So, SunEdison backing out of the acquisition may be seen as a bad thing for Vivint Solar's stock in the short term, but long term, it could be a great thing operationally.

This is far from over
Being involved in SunEdison's financial mess has been a headache for Vivint Solar, and there's at least a few more weeks of the drama left. But SunEdison filing for bankruptcy or David Tepper winning his lawsuit may not be all bad for the company. An acquisition would be an easy way out now, but this is still the second biggest residential solar company in the U.S., and that's a good place to be in a booming U.S. solar industry.