Major earnings reports from players in retail and tech are on tap.

Stocks logged solid gains during the last five trading days, marking the second strong week for blue-chip indexes. The Dow Jones Industrial Average (^DJI -0.19%) and the S&P 500 (^GSPC -0.87%) each rose by more than 2% last week, and are now down by roughly the same margin after having reached double-digit losses in mid-February. 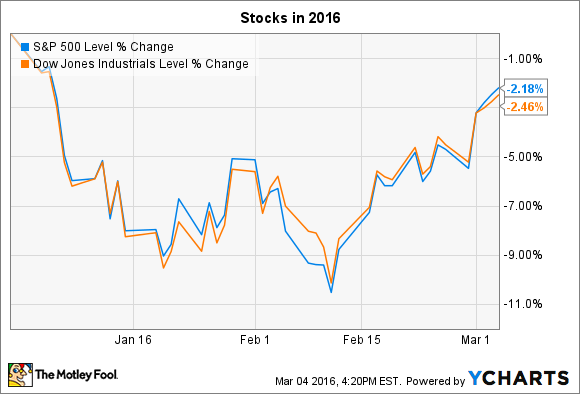 Monday, March 7 -- Urban Outfitters' profit margin
Apparel and home-goods retailer Urban Outfitters kicks things off with its holiday-season earnings report due out after the market closes on Monday. The stock is up 30% in the three months since its last quarterly update compared to a 3% decline for the broader market.

Thanks to a mid-quarter update from the company last month, we know that comparable-store sales rose by 2% in Q4. That boost looks strong in light of peers Gap (GPS -1.44%) and Macy's (M 1.00%), which both posted negative comps over their holiday quarters. Yet investors will be interested in the critical earnings part of that growth equation, because Urban Outfitters likely had to engage in aggressive discounting to wrestle market share from competitors.

Other retailers certainly did. Macy's gross margin fell by three percentage points in Q4, to 37% of sales, and Gap's slumped to 25% from 35% a year ago. If Urban Outfitters' gross margin holds close to the prior year's 35% mark, it would spell strong, healthy momentum for the business.

Wednesday, March 9 -- Square's plan for profits
Upstart payment-processing specialist Square posts its first quarterly result as a public company on Wednesday, and Wall Street is projecting about $340 million of revenue producing a net loss of $0.13 per share. The stock has been highly volatile since its November IPO, plunging 33% in January before rising by about as much during the following month.

Investors' recent optimism coincided with the revelation that payment titan Visa owns a substantial stake in Square's stock -- although the actual figure, 1%, isn't nearly as high as the near 10% that some reports had suggested.

On Wednesday, investors will be looking for evidence that Visa's investment makes sense, and that would come in the form of evidence that CEO Jack Dorsey and his executive team have a good plan in place to expand the business, while at the same time achieving positive cash flow and earnings growth.

Thursday, March 10 -- Dollar General's sales growth
Dollar General's Q4 results are due out before the market opens on Thursday. Its shares have outperformed rival discount retailer Dollar Tree by 5% during the last year.

For its part, Dollar Tree's comps rose 1.7% during the holiday quarter, as gross profit nearly doubled thanks to the addition of a massive Family Dollar business that it purchased last year; but profitability sunk to below Dollar General's. In early December, DG forecast that its Q4 would likely power full-year comps of about 2.7%, which would beat the 2.1% result that Dollar Tree managed. But executives at the time warned that forecasting is difficult around the holidays, given that its "core consumer tends to shop closer to events" like holiday sales promotions.

Demitrios Kalogeropoulos has no position in any stocks mentioned. The Motley Fool owns shares of and recommends Visa. The Motley Fool recommends Urban Outfitters. We Fools may not all hold the same opinions, but we all believe that considering a diverse range of insights makes us better investors. The Motley Fool has a disclosure policy.

2 Terrific Growth Stocks That Doubled and Could Climb Higher
405%