Please ensure Javascript is enabled for purposes of website accessibility
Log In Help Join The Motley Fool
Free Article Join Over 1 Million Premium Members And Get More In-Depth Stock Guidance and Research
By Daniel B. Kline - Mar 8, 2016 at 9:28AM

The company has seen its user base shrink, but it may be in a position for a turnaround.

The games brand, which had built itself with titles embedded in social media, has yet to successfully make a transition to the mobile world. It has also had trouble finding a long-term leader with founder Mark Pincus stepping aside in March, partially due to the company's falling February stock price. 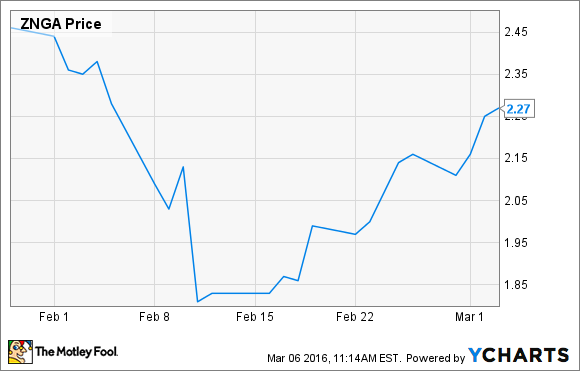 Zynga stock mostly dropped in February before recovering a little when its annual report was release. Data source: YCharts.com.

What: Share of Zynga fell pretty steadily throughout the month of February. After closing at $2.46 on Jan. 29, they dropped to $2.11 at market close on the last day of February, a 14.2% decline, according to data provided by S&P Global Market Intelligence.

So what: Zynga has not had any good news for quite a while. The company has seen its user base decrease and its very business model come into question. On the positive side, revenue has bounced back slightly in 2015, according to the company's annual report. After topping $1 billion in 2011 and 2012, Zynga dropped to $872 million in 2013 before plummeting to $690 million for 2014. That number perked up to $764 million in 2015 -- still well off the company's highs, but at least hinting at the possibility of a turnaround.

The company acknowledged in its annual report that it needs active players to remain viable:

Now what: Zynga stock has very little room to go any lower, and there are signs of a recovery. The company has moved more of its user base (about two-thirds) to mobile platforms away from its strict reliance on Facebook. That should give it a broader potential user base and remove the risk of being so reliant on one platform.

The company also enters March with a new CEO at the helm. Frank Gibeau, who has experience with turnaround efforts, has taken over for Pincus, who will continue to serve as executive chairman of the board. With his considerable industry experience, it's possible that Gibeau could right the ship.