Google may not be winning the cable wars, but it's looking at a bigger opportunity. 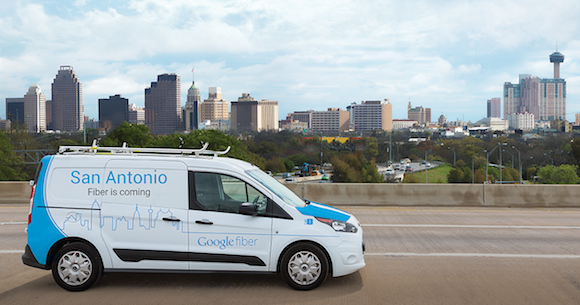 Alphabet's (GOOG -3.29%) (GOOGL -2.75%) Google has taken on Internet service providers in a huge way over the past few years. The company launched its ultra-fast Internet service, Google Fiber, back in 2012 and now it's available or coming to 11 cities, with plenty more to come.

Fiber offers its users 1 Gbps download speeds, which is about 100 times faster than the average U.S. home Internet connection, and typically costs much less than the competition.

But there's one aspect of Google Fiber that may not be as competitive: its television service.

According to data from MoffettNathanson, Google Fiber TV has just under 54,0000 subscribers. For comparison's sake, AT&T (T -2.22%) U-Verse and its newly acquired DIRECTV have a combined total of 25.4 million television subscribers. Comcast (CMCSA -2.77%) follows closely behind with 22.3 million subscribers. It's also worth noting that Google Fiber is only available in about 22% of the broader cable market.

OK, so Google Fiber's TV subscriber numbers aren't all that impressive, but they don't quite paint the full picture of the company's main goal: putting pressure on Internet service providers.

The real focus
Google offers its Fiber subscribers the option of adding television to their Internet subscription, but it's never been the primary service. From the very beginning of Fiber's launch, Google made it clear that offering fast Internet service for cheaper prices than cable providers was the company's primary focus.

And it's been doing a great job competing in that space. Where Fiber already exists, it's already forced some Internet providers to increase their Internet speeds, or lower their prices to match Google's (and sometimes both).

Comcast increased its Internet speeds (doubling some tiers) in Kansas City when Google Fiber launched in the city. And has done the same in other cities as well. Similarly, AT&T has dropped prices by more than 35% in cities where Google Fiber has come, while it still maintains higher prices in locations where Google has yet to come.

Why Google is more focused on Internet users
Google is primarily focused on building out Fiber Internet users because that's where it'll eventually make its money. The company's thinking behind Fiber is that users will spend more time online if they have faster Internet connections, and if they're spending more time online then there will be more opportunities for people to use Google's services and see ads.

Not only is Google already focused on Internet users, but it also knows that television subscriptions may not be a wise long-term bet. By 2018, one in five households won't have a cable or satellite subscription, according to eMarketer.

Google is only using its Fiber television subscriptions to make a little more money while it expands its Internet offerings. It was never meant to take on the pay TV providers, and AT&T, Comcast, Time Warner Cable and others should be very thankful for that. Instead, investors and consumers should focus on how successful Google's been at adding new Fiber cities and how well it's taking on the competition in that space.

Suzanne Frey, an executive at Alphabet, is a member of The Motley Fool's board of directors. Chris Neiger has no position in any stocks mentioned. The Motley Fool owns shares of and recommends Alphabet (A shares) and Alphabet (C shares). The Motley Fool recommends Verizon Communications. We Fools may not all hold the same opinions, but we all believe that considering a diverse range of insights makes us better investors. The Motley Fool has a disclosure policy.