Pretty much anything oil-related is taking a beating today, with the recent oil price rally coming to an end.

If it's a part for the oil and gas industry, NOW probably has it on a shelf. Image source: Distribution Now.

Now what: There's not really anything material happening, except the recent rally in oil prices coming to an end -- at least for one day. Brent crude is down 3% today, falling back below $40 after several weeks of increases moved prices up from around $28 in February. Shares of the oil-field equipment and services companies aren't the only segment of the oil business falling today, as basically anything related to the energy business is taking a beating.

It may be more accurate to call today's sell-off a "giving back recent gains" kind of day, considering how much all of these stocks have gone up since oil prices started rising in February: 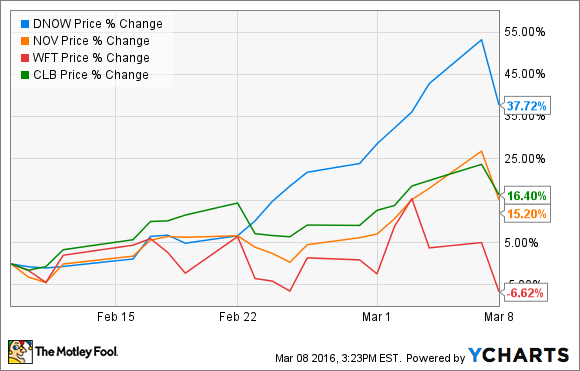 Now what: Again, nothing material has changed overnight, and oil-field service and suppliers like these companies are probably in for a relatively tough 2016, at least early in the year, as more and more global producers announce production cuts or plans to cap output at current levels.

The reality is, oil prices need to rise simply to establish prices at which producers can make money, and that means it could get a little worse -- even from here -- before it gets better. But at the same time, NOW Inc., National Oilwell, and Core Lab are all built to outlast the downturn, and are far more likely to emerge as stronger, better companies once the rationalization of supply balances and production growth becomes necessary. Furthermore, NOW Inc. could be one of the first beneficiaries of the eventual recovery, as producers spend to restock their own inventories, refit drilling equipment, and prepare for increased drilling. But at the end of the day, it's very far from clear how long before that recovery happens.

In other words, don't get too caught up in the market's volatility. That's not going to change anytime soon. If you're willing to ride out the ups and downs to come, the long term is probably still very good for NOW, National Oilwell, and Core Lab.