Indexes broke their four-day winning streak by taking a step back today.

Stocks couldn't make it five-for-five, as indexes fell today after rising in each of the last four trading sessions. 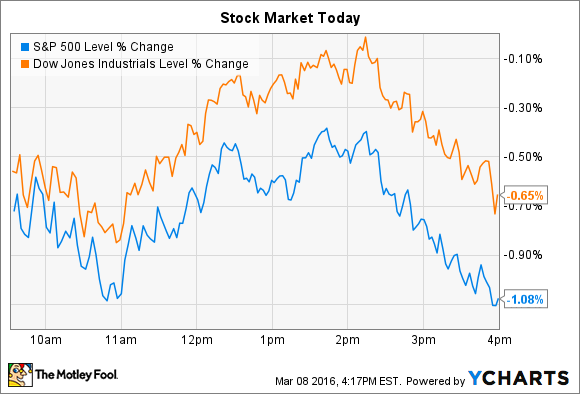 Urban Outfitters' strong profit showing
Retailing specialist Urban Outfitters jumped 16% higher after the company announced its holiday-season earnings results. The surge brought its year-to-date gain to 45%, but shares are still down 16% over the last year.

Urban Outfitters really shined against competitors on the bottom line, though. Its gross profit margin held steady at 35% of sales despite intense competition that saw rivals slashing prices to try to attract customer traffic. Gap's gross margin fell to 25% from 35% over the holiday quarter, and Macy's suffered a 3-percentage point decline as well .

CEO Richard Hayne and his executive team explained that merchandise margins rose by 2 percentage points, but that improvement was offset by investments in e-commerce fulfillment infrastructure.

All told, the company produced $0.61 per share of earnings, beating consensus estimates targeting $0.56 per share. Looking ahead, Urban Outfitters is hoping to keep momentum going in categories other than apparel, such as home, shoes, and beauty supplies. "Our expansion categories performed above our expectations and continue to give us confidence in our future growth opportunities," Hayne said in a press release.

Comparable-store sales spiked higher by 11% in Q4, and Shake Shack finished 2015 with 8 additional locations, bringing its U.S. base to 21 restaurants. At the same time, the company boosted operating profit margin from 22% to 28% of sales. "We are very proud of what we have been able to accomplish in our first year as a public company," CEO Randy Garutti said in a press release .

However, investors weren't as excited about Shake Shack's outlook for the year ahead. The store base growth plan is strong, with 13 new locations set to be opened in the next year. Yet comps are projected to be just 3%, which would represent a major slowdown from last year's 13% jump. Overall, expected sales of $240 million missed consensus estimates.

Slowing growth in a business that hasn't yet produced an annual profit was enough reason for investors to take a step back today. The stock could just as easily bounce higher, particularly if comps growth outperforms management's conservative forecast this year, but Wall Street seemed to put more weight on that growth outlook than on Shake Shack's improving fundamentals today.