Both Wal-Mart and Target are rock-solid dividend stocks, but one is better positioned for dividend growth over the middle term.

Wal-Mart (WMT -0.10%) and Target (TGT -0.53%) are among the biggest and most powerful retailers in the world, and the two companies are remarkably solid choices for dividend investors. But which one is a better investment right now?

Two solid dividend stocks
Both Wal-Mart and Target offer truly spectacular trajectories of dividend growth over the long term: Each has increased its dividends every year for more than four decades. This says a lot about these companies and their underlying fundamental strengths, since it takes a solid business producing dependable cash flows year after year to continue increasing dividends under all kinds of economic conditions.

In terms of dividend payout ratios, both are on safe ground. Wal-Mart's ratio is around 48% of earnings forecasts for the fiscal year ending in January 2017.  Target has a dividend payout ratio in the neighborhood of 43% of forecast earnings. So they are both well-positioned to continue increasing dividends in the future. 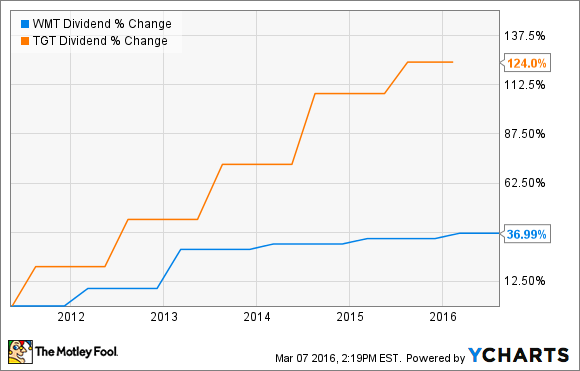 The main reason Target has been more aggressive in terms of dividend hikes is that it's also doing much better on the revenue growth front, especially in the important e-commerce segment.

Target is also clearly outperforming when it comes to earnings. It reported adjusted earnings per share of $4.69 last fiscal year, an increase of 11.3%. Wal-Mart, on the other hand, is reporting declining earnings due to currency headwinds and compressing profit margins.

Even worse, Wal-Mart management is predicting that fiscal 2017 will be another challenging year for the company. Sales are forecast to remain relatively flat, while earnings per share are expected to decline by between 6% and 12%, which will clearly put more pressure on dividend growth. Target is expecting a much healthier performance over the coming fiscal year: Management forecasts that constant-currency sales will grow by 3% or more.

Both retailers recognize that e-commerce is remarkably important in the current sales environment, and they are investing big sums of money in this area. However, Target seems to be getting solid returns from its investments in e-commerce, while Wal-Mart is significantly underperforming in this segment, and this has major implications across the board.

The two companies are among the most respected dividend stocks in the retail sector, and for good reasons: They have proven their ability to reward investors with consistently growing dividends over the decades. On the other hand, Target is outgrowing Wal-Mart on the back of superior performance in e-commerce, a crucial growth segment in the industry nowadays. As long as this trend remains in place, Target should deliver higher dividend growth than Wal-Mart, so it looks like the best choice between the two companies.