Please ensure Javascript is enabled for purposes of website accessibility
Log In Help Join The Motley Fool
Free Article Join Over 1 Million Premium Members And Get More In-Depth Stock Guidance and Research
By Cory Renauer - Mar 10, 2016 at 9:44AM

It's West Coast vs. East Coast in this battle of biotechnology pioneers.

Biotechnology pioneers Biogen (BIIB 1.34%) and Amgen (AMGN 0.79%) have taken a beating from the market this year. On the bright side they've suffered less than their smaller peers in the NASDAQ Biotechnology ETF, which as a whole has underperformed both stocks. 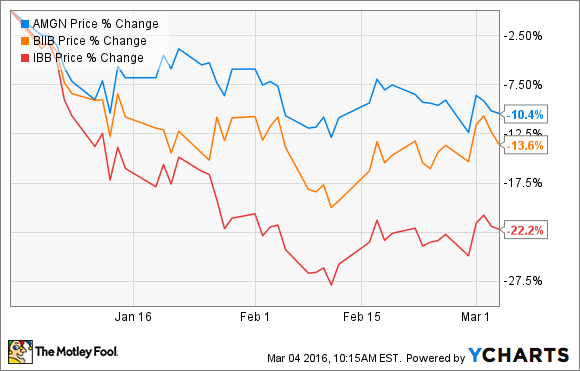 Biogen and Amgen are the second and third largest components of the index, respectively, which makes their resistance all the more signifigant. An ability to remain relatively buoyant while the market clobbers the rest of your industry is a good sign. But which of the two presents a better buy? To decide, we'll need to look a bit deeper than their resilience to negative industry sentiment.

Dividend focus
Amgen clearly has the upper hand when it comes to dividends. It began distributing profits in 2011 and has since raised its quarterly dividend at a blazing annual growth rate of 48% to $1.00 this year.

Biogen, on the other hand, doesn't distribute earnings via a dividend and currently doesn't intend to. However, it's not entirely shareholder unfriendly -- it spent $5 billion last year repurchasing and retiring over 7.1 million shares, significantly lowering the total outstanding.

Dangers ahead
Amgen has a stable of eight blockbusters, five of which posted double-digit sales increases last year. Next year the company might not be able to boast such success.

Last September, Novartis (NYSE: NVS) launched the first of possibly several biosimilar versions of Amgen's top sellers. Biosimilars are basically copycat versions of biologics that generally sell at a 30% discount to the branded version. This is a much lower discount than the typical 80% to 85% common among small-molecule generics, but the competitive threat should still be taken seriously. 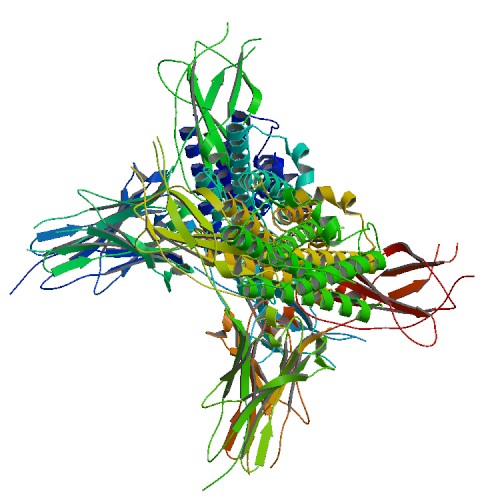 Launched by Novartis last September, Zarxio will be competing with Amgen's Neupogen, a drug with sales of just over $1 billion last year. The white blood cell booster was responsible for just 5% of Amgen's total revenue last year, but the biosimilar threat doesn't stop here.

Novartis is also coming after Amgen's two largest sources of revenue, Enbrel and Neulasta, which together comprised 48% of Amgen's total 2015 sales of $20.9 billion. Regulatory authorities in the U.S. and EU are currently reviewing applications from Novartis for its copycat versions of both drugs. While Novartis' Neulasta and Enbrel biosimilars may be furthest along, versions from other drugmakers are in development as well. In the EU, Biogen's version of Enbrel, Benpali, earned marketing approval from the European Commission earlier this year.

Biogen, on the other hand, has just three blockbusters, two of which lost ground last year. Annual sales of multiple sclerosis drugs Avonex and Tysabri fell about 12% and 3% last year, respectively. One of the drugs they lost ground to, however, was Biogen's main growth driver, the multiple sclerosis blockbuster Tecfidera. Launched in 2013, it saw its annual sales rocketed to $2.9 billion in 2014.

In the treatment of multiple sclerosis, there's long been a dichotomy between safety and efficacy. Tecfidera hit the ground running because it offered an unprecedented combination of both. That notion took a tumble last year, along with its growth rate, when it was associated with multiple cases of PML, a deadly brain infection not uncommon among more potent MS therapies. The FDA has added PML to Tecfidera's list of warnings and precautions, and last year sales of the oral MS therapy grew just 25%, much slower than the market had been expecting.

Luckily, the warning on Tecfidera's label isn't of the black-box variety, the FDA's most severe. Unfortunately for Biogen, a possibly larger threat to its main growth driver is in late-stage development. Although Tecfidera's pill form does improve patient compliance, Roche has a injectable multiple sclerosis candidate, ocrelizumab, that could slow Tecfidera's growth even further, as it might only require administration once every six months.

Forward potential
Last September, Amgen launched Repatha, an effective but expensive cholesterol-reducing agent. Its indication is currently limited to patients with familial hypercholesterolemia, a genetic condition present among roughly one in 500 people worldwide. A phase 3 trial that could expand Repatha's indication to a wider population of patients intolerant to statins reached its goal last month. Even if the label is approved, healthcare providers are leery of the drug's $14,100 list price.

If Repatha shows highly positive results in an ongoing cardiovascular outcome study, Amgen could argue its high price tag represents a relative value. In this case it could reach peak annual sales of about $2.5 billion.

Amgen has other important drugs in its pipeline, but Biogen is expecting clinical trial results from two candidates that could be earth-shattering. Its anti-LINGO-1 recently became the first drug to repair nerve damage. The results were in an acute optic neuritis trial, but if it can do the same in the wider indication of multiple sclerosis, it could become a multibillion-dollar blockbuster. We'll get a clearer picture of anti-LINGO-1's potential when the company presents results from an ongoing phase 2 trial about halfway through the year.

Much further ahead will be a defining moment in Biogen's history. Last summer, its candidate aducanumab significantly reduced amyloid plaques in the brains of early stage Alzheimer's patients. Many believe these plaques cause Alzheimer's. The rate of plaque reduction increased with dosage, and there was significant slowing of cognitive decline with some dosage arms. However, rates of cognitive decline didn't slow in accordance with dosage levels, leading to mixed results. Cognitive decline slowed significantly in the 3 mg/kg and 10 mg/kg groups, but not in the 6 mg/kg group.

Because the trial was so small, an outlier or two could have accounted for the mixed results. We'll know for certain in about five more years, when the results of two identical trials enrolling 1,350 patients each will measure cognitive decline after 78 weeks of treatment with aducanumab or placebo. If the results are positive, they could vault Biogen shares to all-time highs.

Value focus
When it comes to valuation, both companies are priced nearly even on both trailing-12-month earnings and forward earnings estimates, which makes choosing a better buy extremely difficult. 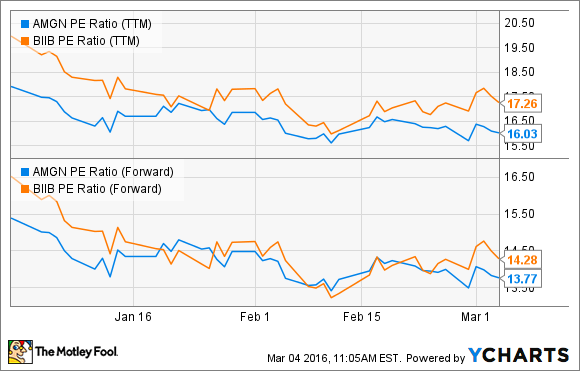 Which company is a better buy ultimately depends on your level of risk tolerance. Amgen's dividend, larger pipeline, and stable of current blockbusters aren't likely to produce mammoth gains, but the stock is likely to be far less volatile than Biogen's in the years ahead, especially if the U.S. patents that Amgen claims provide market exclusivity for Enbrel until 2029 hold.

Without more cases of PML in the near future, Biogen's main growth driver Tecfidera could pick up steam again. If either Anti-LINGO-1 or aducanumab hits its goal, it could produce tremendous gains that Amgen simply can't provide. However, if they fail, and Tecfidera fizzles, you might have wished you'd gone with Amgen.