Intel is scaling back mobile investment, but not really modem investment.

In the note, the analyst points out that Intel "has been scaling back its level of mobile investment," a move that seems a bit strange given that Intel appears to finally be "on the cusp of getting a massive new design win."

Although it's true that Intel has been scaling back its level of mobile investment, there is a subtle but important point investors need to be aware of regarding this investment shift.

Scaling back mobile chip investment, but pressing on in cellular connectivity
Take a look at the following slide from Intel CFO Stacy Smith's presentation at the company's November 2015 analyst day: 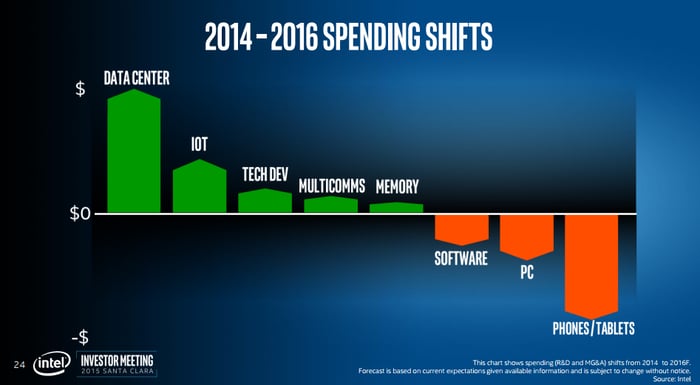 Notice that there is indeed a big cutback in combined research and development as well as marketing spending related to smartphones and tablets. This reduction, Smith indicated, is on the order of $1 billion.

However, you'll notice that on this same slide, Intel indicates it's actually increasing its investments in multicomms slightly between 2014 and 2016. Multicomms refers to the actual wireless technology such as cellular baseband, Wi-Fi, NFC, and so on.

What's the difference?
Intel seems to be cutting back its investment in the broader mobile system-on-a-chip market. This suggests it won't aggressively develop integrated applications processors with modems for mass-market smartphones. I suspect that in addition to scaling back smartphone processor ambitions, Intel won't bother too much with trying to develop competitive applications processors for the bulk of the tablet market, either.

However, Intel management seems pretty convinced that going forward, in order for it to remain competitive in the markets it does still care about (PCs and the Internet of Things), it will need to have credible wireless solutions.

The rationale is probably something along the lines of: "Well, if we need to develop this technology for our core markets anyway, so we should try our best to win major contracts like the Apple iPhone."

Intel will keep trying, but it needs to improve product competitiveness
At this point, there is a lot of chatter around Intel potentially winning a spot in the iPhone 7 with its XMM 7360 LTE modem. The comparable Qualcomm (QCOM 3.00%) modem -- the Snapdragon X12 -- appears to be superior to the XMM 7360 in a number of ways (greater peak upload/download speeds, built on a newer manufacturing node, and so on), which is a key reason that I'm skeptical Intel has actually won this design.

Additionally, if we look out in time -- as Bernstein Research analyst Stacy Rasgon pointed out in a recent note -- Qualcomm's offerings only strengthen relative to Intel's out in time.

The XMM 7480 Intel just announced won't even match the feature-set of a Qualcomm modem that has been shipping since 2015 (and the one that I believe will be in the iPhone 7), let alone Qualcomm's upcoming Snapdragon X16 modem, for example.

With this in mind, I would be much more apt to believe this rumor if it suggested that Intel would be inside some variants of the upcoming iPhone SE (new 4-inch model) or even in a cost-reduced product aimed specifically at emerging markets and other price-sensitive regions. In other words, devices that don't require the latest technologies.

If Intel is able to start closing the gap with Qualcomm in terms of modem features/competitiveness (and I believe it's trying very hard to do so), I'd be much more bullish on a potential flagship iPhone win for the former. Until then, I remain cautious.