Seadrill Ltd. alone has seen its stock price move more than 10% up or down in six out of the first nine trading days in March. Speculation on the oil recovery isn't likely to abate anytime soon, but that's not what investors should focus on.

Offshore work is drying up, and that's not changing with $40 oil. Image source: Oceaneering International.

What: Oil prices are up again on March 11, and it's moving energy stocks along with it. Offshore oil and gas contractors Seadrill Ltd. (SDRL) and Oceaneering International (OII -0.65%) are both up more than 13% at 1:15 p.m. ET, while SM Energy Co. (SM -7.00%), Weatherford International Plc (NYSE: WFT), Cobalt International Energy (NYSE: CIE), Carrizo Oil & Gas Inc. (CRZO), Southwestern Energy Company (SWN -8.96%), and Denbury Resources (DNR) are all up in the double digits so far today as well.

So what: This is a continuation of the recent trend with many oil and gas stocks. As you can see in this chart, almost all of these stocks are up since oil prices bottomed out in January: 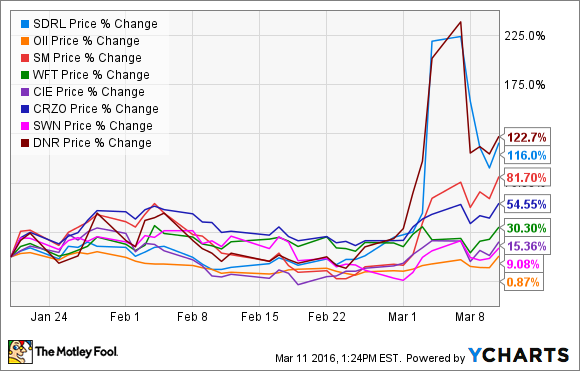 More importantly than the short-term gains, nearly all of these stocks have moved very sharply up or down from one day to the next, often on little to no material news beyond oil prices moving on a given day. There's good news, though. Since Brent crude prices bottomed out below $28 on Jan. 20, it has moved above $40, a nearly 45% increase.

Rising oil prices are a good thing for oil producers, which are starving for cash flows, but even after increasing by 45%, global oil prices are still only barely over $40 per barrel at best. The catch for the producers above is that most realize even lower crude prices than Brent. West Texas Intermediate (WTI), the U.S. benchmark, trades for around $38.67 today, and many producers aren't even getting that, especially if they operate in an area without major pipelines and must rely on rail, increasing transportation costs and hurting their selling price.

Here's how disparate it can be from one producer to the next. Denbury Resources realized an average price of $40.41 per barrel in the fourth quarter, SM Energy realized $34.93, and Carrizo Oil & Gas realized $37.71 per barrel before hedges.

While producers benefit immediately when oil and gas prices rise, Oceaneering International, Seadrill, and Weatherford International won't likely see an uptick in their businesses for potentially many months yet. To start, oil prices are still far below levels where producers will start ramping up capital spending on exploration and production. The reality is, both onshore and offshore producers have spent the past 18 months slashing expenses, with exploration and resource development budgets at essentially every producer cut to the bone.

That means we will likely be well into the recovery before offshore producers start offering long-term contracts to these companies, and the reality is, $40 per barrel probably doesn't change that at all.

Now what: As exciting as the run-up has been, and how the down days might feel like great opportunities to get "in" on the rally, oil prices have a long way to go before there's a true recovery. This is especially true for offshore drillers, but also a concern for independent producers, which by and large need higher prices.

Investors need to be keenly aware of this one thing: Much of the recent optimism that has driven up oil prices is due to what people are saying, not what has actually happened yet. For instance, major global oil producers including Russia and several OPEC nations including Saudi Arabia and others have all said that they are willing to lock their production at January levels, but it's going to take several months before we find out if these statements were lip service or if oil outputs do start to hold steady. There's also the wild card that is Iran, which seems hell-bent on increasing its output after years of sanctions, and could dump a not-insignificant amount of oil into an already drowning market.

Furthermore, global oil inventories, as well as those of refined products, remain at some of the highest levels ever, both in real terms and as a percentage of available storage capacity. If the positive words don't turn into positive action, the recent recovery could just as quickly turn into a sell-off. That's the nature of speculation-driven run-ups, and at this point, that's largely what is moving all of these stocks by such large amounts from one day to the next.

But with that said, it's not all talk. Oil production has fallen in the U.S., and with essentially every U.S. producer spending a fraction as much on drilling as in recent years, it's very likely production does fall for the full year.

Bottom line: Don't invest with the assumption that oil prices will keep rising in the short term, because there's just not enough evidence that the fundamental problem -- too much oil being produced relative to consumption growth -- has completely reversed. Until there's more data to support that what major global producers are saying is what they are doing, it's still very, very early in the recovery, and it's going to be some time before these companies see any benefit or before they are out of the woods.

In the interim, big swings up -- and down -- will happen often, but usually for no concrete reason. Get used to it.