In a masterstroke of genius (and courage), the burrito maker is leveraging its food-borne illness crisis by repurchasing stock.

I've been a believer in Chipotle Mexican Grill (CMG -0.07%) since I ate my first burrito there in the summer of 2001, but it wasn't until last week that I realized how incredibly shrewd its management team is.

I say this because it's currently doing the smartest, but last thing, anyone would expect it to do right now: buying back a large amount of its own stock. In December alone, it repurchased 401,137 shares of its common stock. That's 16 times the amount that it buys in a typical month! The reason it's buying back so much stock is because it's cheap -- at least compared to its stock price five months ago, before a handful of food-borne illness outbreaks caused investors to run for the exits. Since Chipotle's stock peaked at $750 a share last October, its price has dropped by 30%. And at one point in January, they were down nearly 50% compared to their 2015 high.

Assuming Chipotle's business recovers from its recent setback, which I believe it will, then this is great news for its shareholders -- myself included. As William Thorndike discussed at length in his invaluable book The Outsiders, the most successful CEOs since World War II measured by total shareholder return almost all took advantage of downturns in their stock prices to buy back stock.

"Repurchases became popular in the 1990s and have frequently been used by CEOs in recent years to prop up sagging stock prices," Thorndike explains. "Buybacks, however, add value for shareholders only if they are made at attractive prices."

Henry Singleton, the "Babe Ruth of repurchases," was the first corporate chieftain to fully grasp this. Between 1972 and 1984, Singleton bought back 90% of his firm Teledyne's shares at an average price-to-earnings multiple of 8. The money spent on buying back stock generated an astounding 42% compound annual return for the company's shareholders.

To be clear, Chipotle's shares are more expensive than Teledyne's were when Singleton went on his buyback binge. The burrito company's shares currently trade for 35 times earnings. But Chipotle and Teledyne are/were at very different stages in their lifecycles. Chipotle is growing rapidly, while Teledyne had already begun to contract by the time Singleton got serious about buying back stock. This justifies the dearer valuation that Chipotle is paying to repurchase its stock relative to Teledyne. 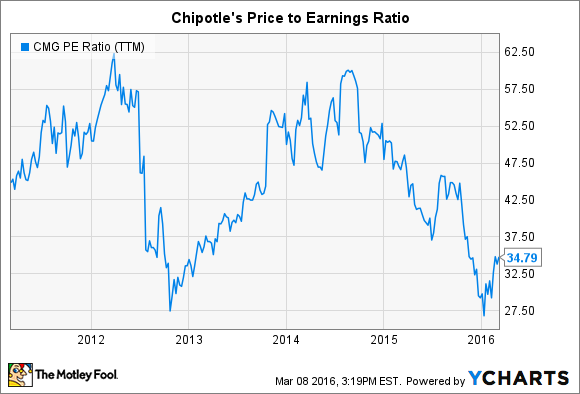 On top of this, Chipotle has likely repurchased even more stock over the past two months at even lower prices. Chipotle recently disclosed that its board of directors has raised the company's buyback authorization two times for a total of $600 million since the beginning of the year. Given this, it wouldn't be surprising to learn that it has repurchased an additional 1 million shares already in 2016, many of which were almost certainly picked up for well below $500 a share.

Lest there be any doubt about it, this is one of the shrewdest examples of capital allocation in the market today. If you're a current or prospective investor in Chipotle, I encourage you to take note.