Please ensure Javascript is enabled for purposes of website accessibility
Log In Help Join The Motley Fool
Free Article Join Over 1 Million Premium Members And Get More In-Depth Stock Guidance and Research
By George Budwell - Mar 12, 2016 at 8:47AM

The biopharma's shares slumped last month despite the company rapidly approaching a pivotal regulatory filing with the FDA. 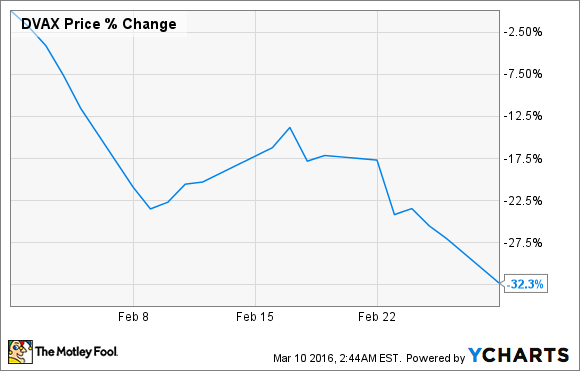 What: According to data provided by S&P Global Market Intelligence, Dynavax Corp. (DVAX 0.41%) shares shed nearly a third of their value last month. Fortunately, this steep monthly drop appears to have more to do with market sentiment than anything related to Dynavax's ongoing operations. After all, the company recently announced the late-stage success of its hepatitis B vaccine candidate, Heplisav-B, showing that it offered superior superior seroprotection in diabetes patients than GlaxoSmithKline's Engerix-B, and the vaccine's safety profile was reportedly acceptable according to a panel of independent experts.

So what: After dropping over 46% from their recent highs, Dynavax's shares are currently trading near their 52-week lows. That's a testament to just how strongly the market has shunned biotechs of all shapes and sizes of late -- especially since Heplisav-B is widely believed to have an excellent shot at garnering a regulatory approval later this year and capturing a significant share of the hepatitis B vaccine market.

Now what: Dynavax announced in its fourth-quarter earnings release that the company should file Heplisav-B's regulatory application with the FDA before the end of March. If the biotech gets a six-month review cycle (as management hopes), the vaccine could be on the market before the end of the year. The one caveat, though, is that Dynavax may need to raise additional funds to support the vaccine's commercial launch, as the company exited 2015 with only $196.1 million in cash, cash equivalents, and marketable securities. That's simply not enough to both launch Heplisav-B and support the company's other clinical activities at the same time. So, shareholders should be on the lookout for either another round of financing, or perhaps a partnership with a bigger pharma.