The home-improvement giant expects to deliver most of the cash it produces this year back to shareholders.

Home Depot (HD -1.24%) is among the fastest-growing major retailers in the country. Revenue rose 6% last year to a record $89 million as the home improvement giant enjoyed accelerating sales gains in each of the past three quarters.

Unlike rival Lowe's (LOW -0.53%), Home Depot doesn't plan to add significant square footage to its store base. It targets launching just five new shops this year, in Mexico, and none in the U.S. Lowe's aims to add 45 locations this year.

Yet Home Depot expects to spend cash aggressively in 2016 -- $10 billion, to be exact -- both in supporting its business and in returning cash to shareholders. Here's how that spending should play out: Investing in the business
While it's the smallest piece of the pie, investments in the business carry the highest priority. Home Depot has budgeted $1.64 billion for capital expenditures this year, a 9% boost over 2015.

A big portion of that money will go toward maintaining and upgrading its aging store base. That includes heavy spending on its growing e-commerce infrastructure. The cash it has invested so far is already paying off: Home Depot's online business grew by $1 billion last year, and the fact that almost half of its digital orders were picked up in stores demonstrates how it can use its store base to fend off online-only rivals.

Paying shareholders back
The next biggest spending piece is dividends, which are slated to rise 13% to $3.4 billion. Home Depot targets returning 50% of its earnings each year to shareholders in dividends, and that's a significantly larger goal than Lowe's 35% promise. The heftier dividend commitment might have played a role in Home Depot pausing its payout hikes during the worst of the housing market crisis, but it has also powered awesome growth for income investors: The dividend jumped by 17% this year after climbing by 21%, 26%, over the previous two years, respectively.

Finally, share repurchases are the largest part of the capital allocation budget, and the only one slated to decline year-over-year. Home Depot aims to spend $5 billion buying back its stock, compared to $7 billion in each of the last two fiscal years.

The company has been unusually aggressive at repurchasing its stock, and over the past 10 years the outstanding share count has plunged by almost 40%. That's how earnings per share spiked higher by 16% in 2015 even though net income rose by 11.5%.

Can Home Depot afford it?
By scaling back its stock repurchase ambitions, Home Depot is making it more likely that it won't have to dip into credit markets to fund any of its capital allocation plans. In fact, the company projects that operating cash flow will rise to $10 billion in 2016 from $9.4 billion last year. 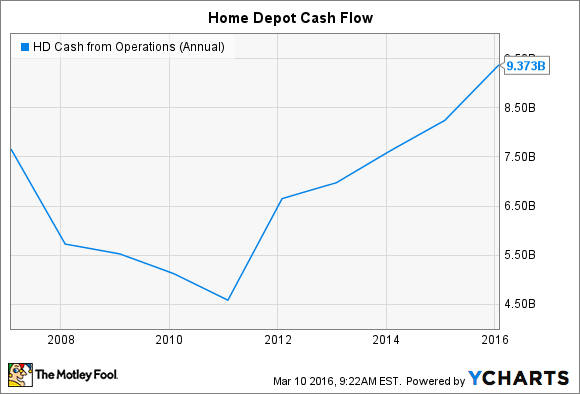 Of course, management could take on new debt if it sees an opportunity to ramp up stock repurchases due to, say, a stock market swoon. Home Depot might also come across another big acquisition like the $2 billion purchase of Interline Brands it concluded last year. But as things stand now, the retailer should have no problem funding its capital returns simply through its hefty operating cash flow.