GM's old luxury brand has had tough sailing in the U.S. recently. Is it time for GM give up on Cadillac and focus on its mass-market brands instead? Or is there more to the story?

Critics are raving about the new Cadillac CT6, a big, slick-handling sports sedan that is hundreds of pounds lighter than its German rivals. But with crossover SUV sales booming around the world, is a big sedan really what Cadillac needs? Image source: General Motors.

Is it time for General Motors (GM 4.62%) to send Cadillac out to pasture?

You might think so if you watch U.S. auto-sales figures. Despite a strong market, the old luxury brand's U.S. sales fell about 1% last year. Sales of key models like the CTS sedan (down 37.4% in 2015) have slumped in a big way.

But is there more to the story? We asked three auto-minded Fools to weigh in on the question asked in this article's headline.

John Rosevear
Yes, Cadillac's U.S. sales haven't looked impressive. But anyone predicting Cadillac's demise has completely missed the real story -- and that's too bad, because it's a very good story.

Here are the three big things to understand about what GM is doing with Cadillac.

First, GM has made a huge commitment at the board of directors level to Cadillac. The plan is to build it into a serious, highly profitable global rival to German luxury-car giants BMW, Audi, and Mercedes-Benz. It's a cornerstone of GM CEO Mary Barra's plan to boost GM's global margins into the 9% to 10% range consistently by early next decade. The company has committed over $11 billion to the Cadillac overhaul. It hired an impressive new management team for Cadillac, and it's setting the brand up as a GM subsidiary with a separate headquarters, similar to how Audi is organized relative to parent Volkswagen. For years, Cadillac was an afterthought in GM's corporate product-development process. This reorganization aims to change that -- and it's already starting to work.

Second, this is a long-term project. Right now, Cadillac's product line is still far short of where de Nysschen wants it to be. The German brands are selling huge numbers of "crossover" SUVs, but Cadillac has just one crossover at the moment, the new XT5. There are three more coming, as you can see from this future-product-plan chart I took from a presentation de Nysschen gave to investors last year. 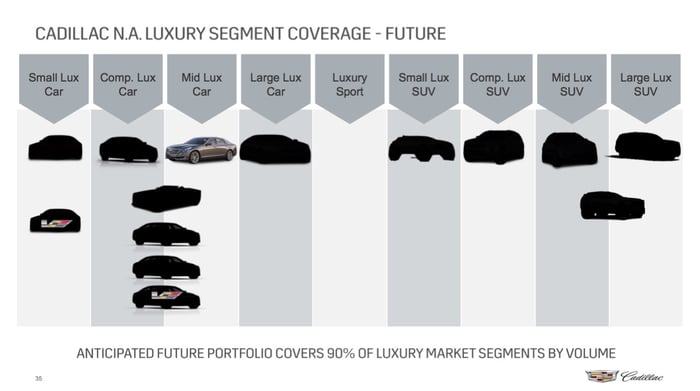 Those three new Cadillac SUVs will give the brand's sales around the world a giant boost. But right now, Cadillac is short of the products that luxury-vehicle buyers around the world seem to want most. Naturally, that's hurting sales.

Third, Cadillac has already made huge progress, enough that investors should take the long-term plan seriously. Its recent ATS, CTS, and CT6 sedans have wowed critics, who have declared them equal to (or even better than) the best from Germany. Even the once-cartoonish Escalade has been refined into a serious, legitimate luxury SUV. The brand's sales are up around the world (Cadillac sales grew 47% in China last year), and while the project to restore Cadillac's luster still has a long way to go, there are very good reasons to believe it will get there -- and that it will deliver a big boost to GM's bottom line when it does.

Daniel Miller
The general consensus on Cadillac is that it's made significant improvements across the brand but still has a ways to go in catching European luxury juggernauts. That means the best is yet to come, and that's a good thing for Cadillac and GM investors.

There are plenty of incremental profits out there for the taking, as GM's total share of the global market sits around 11.4%, but Cadillac's share of the luxury market is only 3.4%, according to GM's 2015 global business conference presentation. So, not only does Cadillac have plenty of room to grow in global market share, that share is valuable: Luxury sales equal roughly 12% of global sales, yet are estimated to generate nearly 38% of the industry's profits.

Those factors alone will guarantee GM will continue to pour in capital to develop its Cadillac lineup, preventing it from becoming a "relic." In fact, just last year, GM announced plans to spend a huge $12 billion to develop eight new models by 2020, and then an additional two vehicles during the following decade. So, the best is clearly yet to come, or something has gone incredibly wrong. However, the brand still faces hurdles, to be sure.

While Cadillac's global story is still in the early innings, investors have a big-ticket item to watch as the 2017 XT5 crossover launches next month. It's replacing the SRX, which generates almost 40% of Cadillac's sales in the U.S. market. A flop would be a big setback, but on the flip side, if it can somehow unseat the Lexus RX for the top sales spot among midsize luxury crossovers, it would be a huge win.

Rich Smith
Cadillac is certainly putting out some pretty commercials these days -- and doing a good bit of guest work appearing on TV to keep the brand in the public's eye. I've noticed the car getting some pretty prominent product placement spots on USA's The Colony television series, for example (as Josh Holloway's preferred ride).

But all the advertising in the world isn't enough to take a brand with a lackluster reputation for quality and turn it into a winner -- and Cadillac's reputation is suffering lately.

After taking third place in the 2014 JD Power Vehicle Dependability Study,and staying close to the top (in fourth place) in 2015, Cadillac suffered a steep slide in this year's just-released 2016 rankings. Cadillac's brand fell to just two rungs above the industry average in 2016 -- which seems to me a pretty Pyrrhic victory for a nameplate that's supposed to scream "premium."

And Cadillac could have even further to fall. This year's Initial Quality Study results aren't out just yet, but Power's 2015 IQ Sreport showed the number of problems per new Cadillac increasing significantly between 2014 and 2015. As problems proliferated, Cadillac's overall rank fell from well within the pack of "above average" automakers down to several rungs below average -- even as the overall average number of problems per new car declined. That's not a trend calculated to inspire confidence in new car buyers.

It seems to me Cadillac needs to get its act together fast, or risk getting left behind.