Please ensure Javascript is enabled for purposes of website accessibility
Log In Help Join The Motley Fool
Free Article Join Over 1 Million Premium Members And Get More In-Depth Stock Guidance and Research
By Sean Williams - Mar 14, 2016 at 10:41AM

Who ever said big businesses have to grow at a snail's pace? 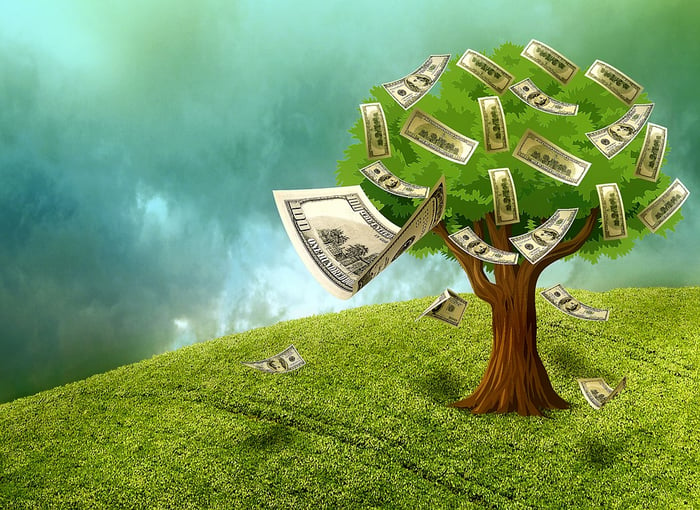 The past couple of weeks have delivered a nice sigh of relief to investors who've endured the worst start to a new year in recorded history. At one point the broad-based indexes were bordering on double-digit percentage losses over the course of just a few weeks.

Yet even with this latest rebound, the increase in volatility and economic uncertainty has left investors scrambling for ways to shore up their portfolios and keep them on track for long-term gains. Over the past couple of weeks we've analyzed a number of ways investors can protect their assets, while retaining the opportunity for share price appreciation. We've looked at companies boasting boatloads of cash, paying out hefty dividends, and cranking out the cash flow -- companies that were on track to generate juicy profits.

One of the common themes of these lists is that these companies are typically large-caps or megacaps (arbitrarily defined as a market valuation of $100 billion or higher). Big companies typically have solid foundations that can withstand a downturn in the U.S. economy and stock market. They also tend to have healthy cash flow, diversified business models, and juicy profits.

Megacap stocks with juicy EPS growth rates
What you don't often find with the largest publicly traded companies is rapid growth prospects. Big companies are often mature when it comes to top- and bottom-line growth. However, that's not the case for three megacap stocks. Based on Wall Street's projections, the following three business giants are on pace to grow their EPS by more than 20% over the next five years.

1. Facebook
Probably no surprises here that social media giant Facebook (META 7.19%) is one of the fastest growing megacap stocks you'll find. Wall Street projections suggest that the company's $2.28 in reported full-year EPS in 2015 could grow to north of $7 by 2019. Revenue is also expected to surge from $17.9 billion to $52.1 billion over the same time span.

These growth figures are phenomenal, but they only matter if we understand the dynamics of what's driving them. In the case of Facebook, it's a superior social media platform and multiple channels to generate revenue and cash flow.

Facebook's latest quarterly report tells you everything you need to know about its dominance among social media networks. It had 1.04 billion daily active users as of December, of which 934 million were daily mobile active users. It also claimed another 550 million people were monthly active users. It's using these impressions to entice small- and medium-sized businesses to jump on board its advertising platform -- and the results have been phenomenal. Advertising revenue rose 57% year-over-year in Q4, and operating margin spiked 15% to 44%. Facebook doesn't have to do nearly as much from an operating perspective since its all-encompassing network is selling itself.

Facebook also has growth channels through subsidiaries like Instagram, an opportunity to expand its advertising margins through an increased use of video (which you've probably already seen on your own Facebook feeds), and the ability to monetize its platform for payments. We've already witnessed the introduction of free friend-to-friend payments through Messenger.

In short, Facebook's ability to monetize its platform is still in its infancy, and the competition has been left in the dust.

2. Amazon.com
Next up we have Amazon.com (AMZN 3.58%), the king of all e-commerce retailers. Amazon typically gets a lot of flak for its focus on expansion over profits, but Wall Street sees this changing in a big way in the coming years. Following a $1.25 full-year profit in 2015, Wall Street expects $21.75 in full-year EPS by 2019. Sales are also expected to practically double from the $107 billion reported in 2015 to an estimated $212 billion in 2019.

Amazon's retail operations are an absolute monster, and it's the clear trendsetter in e-commerce. The scary thing is that e-commerce as a whole still accounts for just 7.4% of total retail sales, yet Amazon accounted for about half of all U.S. retail growth in the fourth quarter based on estimates from Wells Fargo. The company's Prime membership serves to keep consumers loyal, and more importantly it helps remove one of the biggest gripes of shopping online: shipping costs. Prime members enjoy free two-day shipping on qualifying orders. It also doesn't hurt that Amazon's prices can undercut those of most of its competition.

Like Facebook, Amazon also has numerous channels where it can boost its profitability beyond just retail. It's building one heck of a digital library that consumers can access to stream movies or TV shows directly into their homes. Also, Amazon's Web Services, or AWS, is a rapidly growing cloud-based platform for businesses and even the Internet of Things, one that grew by 70% in fiscal 2015 and now accounts for more than 7% of Amazon's total annual revenue.

There seems to be no stopping Amazon's dominance, and as e-commerce use spreads, Amazon's platform should become even more important to the consumer.

The great secret for Bristol-Myers Squibb is no secret at all -- it's one big part innovation and a side helping of inorganic growth.

In terms of innovation, a lot will be riding on cancer immunotherapy Opdivo. Cancer immunotherapies are a relatively new treatment designed to kick your immune system into high gear, while simultaneously blocking the immunosuppressant quality of cancer cells. Thus far, Opdivo has been approved as a treatment for metastatic melanoma, second-line advanced renal cell carcinoma, and second-line non-small cell lung cancer. In each instance it's demonstrated substantial improvements in response rates and progression-free survival (as well as overall survival in select instances), especially in patients whose tumors express PD-L1. Opdivo's best bet is as a combination therapy, which leaves it open to dozens upon dozens of combinations and therapeutic indications.

But don't discount blood-thinner Eliquis, which was co-developed with megacap Pfizer (PFE 3.00%). In a prior head-to-head study against warfarin, a longtime go-to anticoagulant, patients taking Eliquis exhibited fewer strokes, less major bleeding, fewer hemorrhagic strokes, and fewer deaths. Its expansion is dependent on how many new indications it can garner, but Pfizer and Bristol-Myers are likely looking at a multi-billion dollar drug if the clinical data keeps going their way.

Lastly, Bristol-Myers' management team believes in adding value through acquisitions. Among its latest is the purchase of privately held Cardioxyl for up to $2.1 billion. The move allows Bristol-Myers Squibb to get its hands on Cardioxyl's lead clinical cardiovascular product, CXL-1427, for the treatment of acute decompensated heart failure.

A deep pipeline tells a tale of strong growth to come at Bristol-Myers Squibb.

Let growth be your guide
What this diverse group of megacap stocks offers an investor is a possible mix of market-topping growth and better-than-average stability in the face of a stock market and/or economic downturn. Understandably, EPS growth rate is just one consideration that should be made when examining a stock -- but these three businesses could be well-suited for an investor looking to nab a bargain growth stock following the rough start to the year.

Amazon Stock: Why Investors Must Be Patient for Double-Digit Growth