Here are five stocks fit for the Oracle of Omaha that you can buy now.

Warren Buffett is perhaps the most highly regarded stock picker of all time. And while there's no way of knowing for sure which stocks he may buy or sell next, we can certainly apply some of Buffett's wisdom to our own search for great investments. With that in mind, here are five stocks out contributors feel Warren Buffett would love.

Brian Feroldi: Buffett loves to invest in companies that have durable competitive advantages and have positioned themselves for long-term growth. For that reason, I could easily see Buffett being interested picking up a few shares of pharmacy giant CVS Health (CVS -0.82%), which exhibits many of the traits he looks for in a good investment.

CVS Health operates one of the largest retail pharmacy chains, but the company also owns the second largest pharmacy-benefit manager company in the country. Both of these businesses benefit greatly from having increased size and scale, giving the company huge purchasing power. That helps to give the company a durable competitive advantage that the company relies on to protect itself from competitive forces and produce steady results.

That strong moat isn't the only reason I'd think Buffett would be attracted to CVS Health's stock. The company has also positioned itself nicely for long-term growth. Last year it spent $1.9 billion to take over Target's pharmacy and clinic business, which added roughly 1,700 new stores to its network and grew its store count by more than 20%. Those new stores give the company a great new audience to market its pharmacy services to and should prove to be a meaningful long-term tailwind to the company's business.

Beyond simply growing its store count, CVS Health is also working to make the stores themselves more profitable. Consumers seem to really like the convenience of using the company's in-store MinuteClinics to help treat minor ailments, and CVS is pushing aggressively to expand their roll-out. It currently operates more than 1,135 clinics in 33 states, but it has plans to add hundreds more over the coming years.

Finally, I think Buffett would appreciate that CVS Health has a long history of being shareholder friendly. The company has meaningfully increased its dividend annually for more than a decade and regularly repurchases billions of its own stock each year. Add it all up, and I think CVS Health is the kind of company that Buffett likes to buy and hold for the long term.

Matt Frankel: I'm hesitant to speculate on which stocks Warren Buffett might like right now, mainly because I feel that there are so many great Buffett-style bargains, particularly in the financial and energy sectors. However, one stock that definitely deserves mention here is the most obvious choice: Berkshire Hathaway (BRK.A -1.90%) (BRK.B -1.89%) itself.

First, Berkshire Hathaway is a great business. The company's primary focus is selling insurance through subsidiaries (such as GEICO), and investing its cash in other businesses and stocks that are selling for attractive valuations and have excellent long-term prospects. All of Berkshire's businesses have identifiable competitive advantages, and the company's stock portfolio reads like a who's who of stable American companies.

Warren Buffett has said that his goal is to buy wonderful businesses at fair prices. He also said in his letters to shareholders that he would consider Berkshire to be expensive at around two times book value and cheap around 1.2 times book. In fact, Buffett said that buybacks at the latter valuation would "instantly and meaningfully increase per-share intrinsic value." 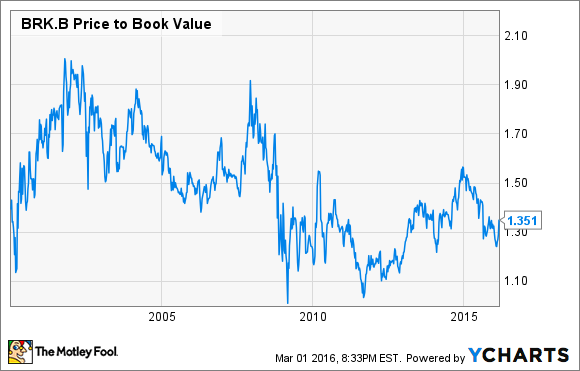 Even with the recent stock market rebound, Berkshire is still trading on the lower end of the valuation spectrum, and it has approached the "cheap" 1.2 times book level recently. In short, Berkshire is a fantastic business trading for a fair, if not cheap price right now, which Buffett loves.

Sean Williams: When I think of Warren Buffett, I think about an investor looking for strong brand-name companies that are capable of remaining profitable in any economic environment. He likes efficient businesses and tends to value companies that deliver an average, or above average, dividend yield. Thus, the stock that I believe should be on Buffett's radar is appliance giant Whirlpool (WHR -2.09%).

Whirlpool owns more than a dozen appliance brands, including Maytag, KitchenAid, Amana, and, of course, Whirlpool. These are brands that have little trouble selling themselves, which is something Buffett can appreciate. Nonetheless, Whirlpool has done what it can to spruce up its existing brands. In 2015 it reintroduced its KitchenAid brand with a more homely look, going back to its roots to design a product that might speak to a more mature homeowner. Having so many different appliance brands at its disposal gives Whirlpool the other opportunity to focus on wide swaths of consumer desires.

Whirlpool is also growing more efficient. As noted in the company's fourth-quarter earnings release from late January, acquisition synergies, capacity-reduction initiatives, and an improvement in product price and mix, helped push not only profits higher, but margins as well. Since 2011, Whirlpool's gross margin has expanded by 390 basis points to 17.7%, and I would look for the company to continue to combine pricing power and organic growth with its prowess for the occasional acquisition. After reporting an adjusted $12.38 in EPS in fiscal 2015, Whirlpool is projecting $20 to $22 in full-year EPS by 2018.

Lastly, we have income potential. Whirlpool is already paying out $3.60 a year, good enough for a 2.3% yield. Since early 2011, Whirlpool's payout has more than doubled, and its EPS growth implies that further dividend increases may be likely.

Sporting a single-digit forward P/E, Whirlpool has all the makings of a Buffett stock, in my opinion.

Dan Caplinger: One thing that Buffett has always demonstrated is his ability to find stocks that have suffered temporary setbacks but return their fundamental core strength. Automaker Ford Motor (F -2.01%) fits the bill in many ways.

Ford stock has struggled for a couple of years now, despite the unprecedented strength that the auto industry enjoyed in 2015. Short-term disruptions from the conversion of the F-150 line to its innovative aluminum-body construction led to extensive downtime, and that created shortages of the top-selling pickup truck that put pressure on revenue for several months last year. Labor issues also created uncertainty, although a favorable resolution toward the end of 2015 helped ally some of those concerns. More recently, Ford has suffered from concerns that the economic cycle in the U.S. could be near its peak at the same time that many international economies are still sputtering.

Yet Buffett has never hesitated to take the long-term view, and Ford's track record of being the only member of the Big 3 to survive the financial crisis without resorting to bankruptcy protection shows its tenacity in an industry that presents regular challenges. In the long run, Ford should be able to bounce back from the difficulties it faced last year and prove the superiority of its strategic vision. That's something that Buffett would appreciate.

Jason Hall (Phillips 66): It may sound foolhardy to offer up a stock in an industry that Buffett has shown to be fallible in over the past several years, with Phillips 66 (PSX -1.64%). After all, one of his biggest investing mistakes ever was ConocoPhillips, which Buffett invested -- and lost -- billions in before and during the recession. More recently, Buffett invested billions in ExxonMobil, only to sell within a few years with middling returns.

What makes Phillips 66 different? A few things make it a classic "Buffett" company.

Additionally, Phillips 66 isn't an oil producer, but a consumer, buying oil to make gas, diesel, and jet fuel, then selling those products. That means it is largely insulated from the volatility of oil prices, making money at essentially any oil price.

There's also growth. Phillips 66 management knows refining isn't a growth business, so they are devoting excess capital to growing its natural gas pipelines and chemicals businesses, which are set for years of higher-return growth. Demand for natural gas and gas-based products like plastics and fertilizers is a solid long-term opportunity, fueled by plentiful U.S. reserves.

Lastly, Phillips 66 is on track to be a dividend dynamo. It only yields 2.6% at recent prices, but has increased payouts by 180% since 2012, and still pays out less than 30% of earnings. Add it all up, and this may be the most "Buffett" energy stock Uncle Warren has ever bought.

The only question in my mind: Will he try to buy the whole company?