After Exelexis' recent market beat-down, is it a better buy than the big pharma that fell off a patent cliff?

Exelixis (NASDAQ: EXEL) ceased to be a clinical-stage biotech years ago, but its stock still behaves like one. Positive data last summer sent shares of the stock soaring. Despite a lack of catastrophic news, most of those gains have been given back, as it's been swept along with the rest of the Nasdaq Biotechnology Index. Since the beginning of the year, Exelixis' stock has lost more than 30%, despite a string of generally positive developments.

Over the past year the S&P Pharmaceuticals ETF has taken an even tougher beating than biotechs. As the ETF's third largest holding, Bristol-Myers Squibb (NYSE: BMY) has shown some impressive buoyancy. 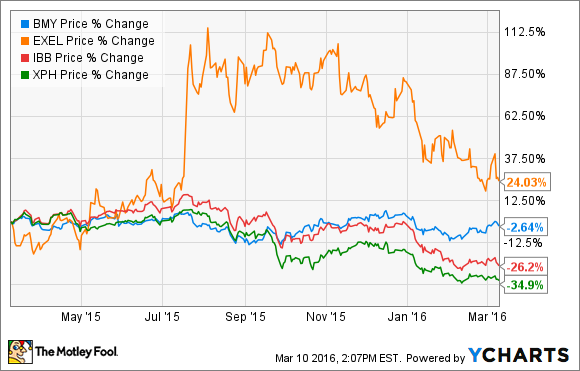 I'd argue that both these stocks haven't been treated fairly by the market recently -- a situation long-term investors live for. But deciding which is the better buy requires looking much deeper than their recent price movements.

All in on Cometriq
Basically, Exelixis has a single marketed product, Cometriq, with a single indication: advanced medullary thyroid cancer. The drug was launched in January 2013, and annual net revenue from Cometriq rose 36% last year to $34 million. That's impressive, considering only 500 to 700 thyroid cancer patients in the U.S. become elligible for Cometriq treatment each year. Exelixis also has a profit-and-loss sharing collaboration agreement with Roche for another drug named Cotellic, but so far it's produced nothing but losses.

Cometriq's addressable patient population hasn't remained so small for lack of effort from Exelixis. The company spent heaps developing the drug for prostate cancer. After it failed to outperform prednisone -- an old anti-inflammatory steroid used in dozens of indications -- many thought the company was doomed.

However, Cometriq reached its goal last summer in an advanced kidney cancer trial that compared it to Novartis' Afinitor. That was good enough to earn a priority review of an application to expand its label to this much larger indication. The company expects a decision by June 22.

Can Cometriq compete?
Unfortunately for Exelixis, if approved, it will be competing with Opdivo from Bristol-Myers for the roughly 17,000 Cometriq-eligible patients in the U.S. with advanced kidney cancer. Last November, the FDA approved Opdivo for the indication nearly four months ahead of schedule.

I've never known the agency to turn around an application that quickly and am inclined to view it as an unofficial endorsement. However, Exelixis, which didn't file Cometriq's kidney cancer application until after Opdivo had already won approval, has some interesting arguments for its role in advanced kidney cancer. The FDA approved Opdivo largely based on its ability to increase overall survival, but in February, Exelixis claimed Cometriq is the only agent to significantly improve overall survival, progression-free survival, and objective response rate. To see just how significantly it improved these metrics, we'll need to wait until the company presents data at a medical meeting later in the year.

We'll need to take any comparisons with a grain of salt. Although they were both using Afinitor as a control, it was not a head-to-head trial. The important takeaway is that Exelixis needs Cometriq to become relevant in kidney cancer. The company lost nearly $170 million last year and finished 2015 with just $167 million in cash and short term investments. On the bright side, a recent deal with French drugmaker Ipsen to commercialize Cometriq outside of the U.S. put another $200 million in the company's coffers. If the drug is approved on both sides of the Atlantic, and significant commercial success in advanced kidney cancer follows, Exelixis could finally produce positive cash flows.

Clearer skies ahead
Although I do expect kidney cancer approvals in the U.S. and E.U. for Cometriq, I shudder to think of what would become of Exelixis if it flops in the marketplace. Performance of Bristol's oncology program, on the other hand, has been spectacular. On the regulatory front last year, its oncology therapies racked up seven big FDA approvals and two each in the EU and Japan.

The majority of those approvals occurred in the fourth quarter, and this January the FDA expanded Opdivo's addressable population as a single agent, and in combination with Yervoy, for certain melanoma patients. You'll want to keep your eyes on Bristol's top-line growth in the quarters ahead. Opdivo sales reached just $942 million last year, but its annualized run rate based on fourth-quarter sales was $1.9 billion. Given Opdivo's recent regulatory success, peak estimates suggesting it could hit $13 billion annually aren't as outrageous as they seem.

Opdivo is far and away the biggest star, but unlike Exelixis, Bristol has more than one product driving growth for the company. Next-generation anticoagulant Eliquis revenues rose 140% to $1.86 billion last year. Also, recently-approved multiple myeloma therapy Empliciti has a chance to reach blockbuster status.

Value focus
I'll admit that at just $3.82 per share for Exelixis, if Cometriq hits blockbuster status in a few years while maintaining reasonable operating expenses, a speculative investment here could pay off. The potential reward, however, doesn't outweigh the risk. Last year Exelexis spent more servicing its substantial debts than it recorded in revenue. If Cometriq fizzles, investors could lose everything.

Bristol's growth drivers are already succeeding, while Cometriq's future is heavily clouded. Granted, Bristol has faced some tough losses to generic competition for its previous blockbusters, but the worst is over.

To top it off, Bristol's currently offering a 2.3% dividend yield. Add it all up, and the bigger company is the better buy, hands down.

Cory Renauer has no position in any stocks mentioned. The Motley Fool recommends Exelixis. We Fools may not all hold the same opinions, but we all believe that considering a diverse range of insights makes us better investors. The Motley Fool has a disclosure policy.