The wireless specialist or the diversified chip-maker?

Let's take a closer look at both businesses to see which stock might be the better buy.

Broadcom's all-in on chips, but is diversified within them
Broadcom is all-in on chips, unlike Qualcomm which derives a significant portion of its revenue and profits outside of the sale of chips. In sharp contrast to Qualcomm's chip business which primarily consists of selling chips into smartphones and other adjacent markets, Broadcom's business is rather diverse.

Take a look at the slide below to see the different technologies, products, and ultimately end markets that Broadcom serves: 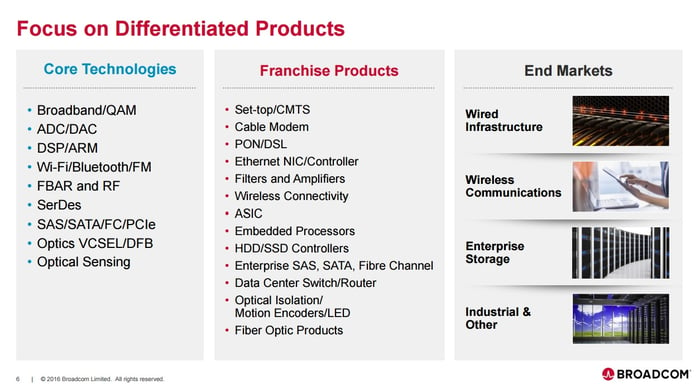 This diversity stems from the fact that the current "Broadcom Limited" is actually stitched together from a number of major semiconductor companies. Avago bought LSI in late 2013, which gave the company many of the enterprise storage components of its portfolio, which were later bolstered by its buy of Emulex in early 2015.

Avago's acquisition of Broadcom (which was really more a combination of equals) gave rise to the current Broadcom Limited.

As far as chip companies go, it's hard for me to think of a player with a more diversified product portfolio.

Qualcomm is virtually all-in on phones
Qualcomm, on the other hand, is quite exposed to the smartphone market, with the vast majority of its chip-related revenue coming from processor and auxiliary chipset sales into smartphones. Additionally, Qualcomm isn't just a chip company. The majority of the company's revenues come from chip, but most of its operating profit actually comes from licensing out its wireless patents.

In a nutshell, anytime a company wants to sell a device with cellular capabilities -- whether those devices pack Qualcomm-designed chips or not -- Qualcomm gets a cut on the order of 3% of the device's selling price (though the actual royalty calculations, particularly in China, can be more complex than that).

Qualcomm's chip business is trying to expand beyond smartphones, into markets such as automotive, networking, and even servers, but at this time chips that go into phones pay the bills. I also can't imagine an opportunity more lucrative than smartphones for its licensing business.

Valuation and dividend
Broadcom Limited is expected to generate just north of $16 billion in revenue in the coming fiscal year and, on that, earn $12.59 per share in earnings. At the current share price of $148.82, this implies a forward price-to-earnings ratio of just 11.82.

Qualcomm, on the other hand, is expected to rake in $23.82 billion in sales and, on that, earn $4.77 per share. Qualcomm stock recently closed at $52.22 per share, meaning that the stock trades at around 10.94 times forward estimates.

Both companies, on this metric, seem quite inexpensive. However, Qualcomm is slightly cheaper and, if we exclude net cash (Qualcomm is sitting on about $20 billion in net cash while Broadcom will be focused on paying down its considerable debt position for a while), Qualcomm becomes even cheaper still.

As far as the dividend goes, this is an area where Qualcomm has a substantial lead. Broadcom's current dividend yield sits at just 1.32%, while Qualcomm's -- following a recent dividend increase -- sits at a cool 3.68%.

The verdict
Both Qualcomm and Broadcom are very high quality companies. Broadcom is attractive because its execution has been superb and its product portfolio is both very broad and deep, making it a great pure-play chip design house.

Qualcomm is interesting because it is very well positioned to profit from the smartphone market, both as a component vendor and as the owner and licensor of fundamental wireless technology patents. It also doesn't hurt that the company's stock is quite cheap at the moment and pays a hefty dividend.

Although I am a fan of both companies, I believe that Broadcom is close to fully valued at the moment as its consistently strong execution is baked into the stock price.

In contrast, Qualcomm has faced a number of challenges over the last year or so and as the company continues to tackle those challenges, its financial performance stands to see a nice improvement, which could lead to out-performance over the next year or so.

If I had to buy shares of either Qualcomm or Broadcom today, I would go with Qualcomm.