The market has started pricing a cyclical recovery into railroad stocks lately. But is there any sign that the growth train is approaching the station yet?

After a fearful battering in 2015, North American railroad companies have massively outperformed recently. In a sense, it's a classic "risk-on" trade as investors pile into the riskier stocks, but it could also be the market pricing in the beginning of a cyclical recovery. Let's take a closer look at Union Pacific (UNP 0.04%) to see if there is anything to the latter idea. 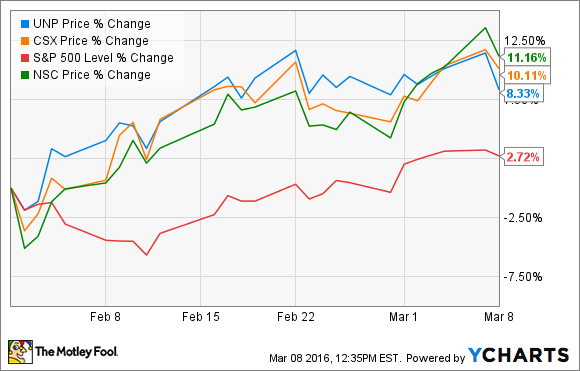 Once I built a railroad
In a normal business cycle (if such a thing actually exists), railroads are cyclically exposed. But this time around, you could argue they have super-cyclical exposure. The weak points of the industrial sector in 2015 were precisely the kind of heavy industries (coal, mining, energy, metals, etc.) that railroads rely on for much of their profitability. Throw in the stronger U.S. dollar negatively impacting export growth and low crop prices hitting fertilizer demand, and you had an almost perfect storm.

In fact, a quick look at  Union Pacific peer, CSX Corporation's (CSX -0.61%) outlook for the first quarter reveals only three positive end markets (automotive, minerals, and waste and equipment) with intermodal neutral, and everything else unfavorable, including food and consumer, where "truck capacity challenges rail share on western produce."

Coal's structural decline remains a long-term challenge -- particularly for East Coast-focused railroads like CSX, with its exposure to higher-cost Appalachian coal. However, as you can see in the chart below, only the automotive end market grew year over year for Union Pacific throughout 2015. 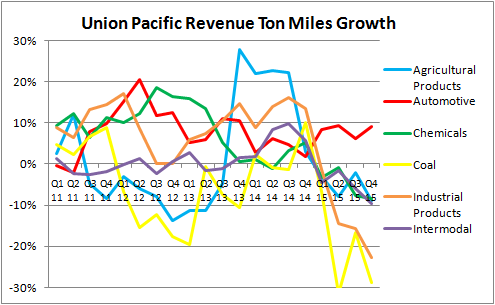 But what about all that recovery talk in my opening?

Sequential growth stats
One way to determine whether conditions are bottoming is to look at sequential growth (in this case, one quarter compared to the previous quarter) and compare it with previous years. If an end market is bottoming, the sequential numbers will usually start to look relatively better before the year-over-year numbers do. So let's break out Union Pacific's end markets and see what's going on. All the following data is for revenue ton miles.

The data doesn't look positive. To read the chart, compare the 2015 readings (in orange) for each quarter to the previous years' quarters adjacent to them. The first chart shows total revenue ton miles, and clearly, the fourth-quarter's sequential growth was weaker than in previous years. 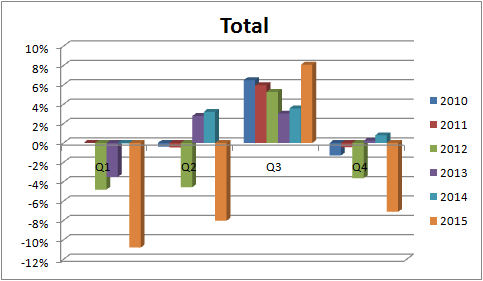 In fact, the sole end market showing some relative strength compared to previous years was automotive: 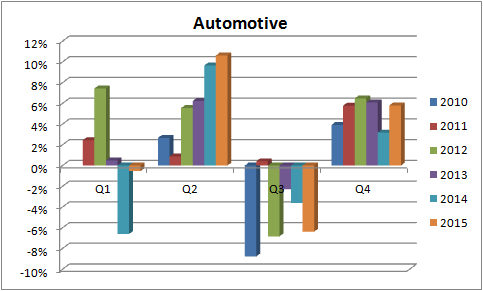 The rest of Union Pacific's end market sectors were notably weak. For example, industrial suffered due to poor conditions in the minerals and metals markets, while intermodal disappointed due to international carload volumes declining 12% in the fourth quarter.

Moreover, performance in its agricultural products segment disappointed due to export demand weakness; strong global grain production is reducing the need for U.S. grain overseas. Meanwhile, chemicals weakness was partially due to a 42% drop in crude oil carload volumes.

In short, based on Union Pacific's sequential growth rates and CSX's outlook, there is no evidence that railroad end markets have passed any kind of inflection point; the industry looks set for more near-term weakness. In addition, many commentators believe that automotive -- the one strong market -- is set to plateau in 2016.

Where next for railroad stocks?
In reality, the market tends to price in cyclical recoveries before they happen, so this analysis doesn't mean you shouldn't buy Union Pacific or CSX stock provided you think the economy will improve in the second half of 2016.

However, for cautious investors who like to see some early evidence of recovery in their stocks' end markets before they buy, the railroad sector is worth avoiding for another quarter. It's too early to call the bottom.

Lee Samaha has no position in any stocks mentioned. The Motley Fool recommends CSX. We Fools may not all hold the same opinions, but we all believe that considering a diverse range of insights makes us better investors. The Motley Fool has a disclosure policy.