VW's shares have lost about 25% of their value since the diesel-emissions scandal broke last September. But is that enough of a drop to make them a buy?

Long-term-minded investors look to buy (and hold) great companies at good prices. Sometimes, that means buying a great company when it's having a not-so-great moment, when it's going through some kind of trouble that has depressed its stock price.

VW's stock price has been clobbered
As just about everyone probably knows by now, VW has been reeling from revelations that it programmed millions of diesel-powered cars to cheat on government emissions tests.

Look at what has happened to the price of VW's American depositary receipts since the U.S. Environmental Protection Agency first announced charges against the company on Sept. 18 of last year. 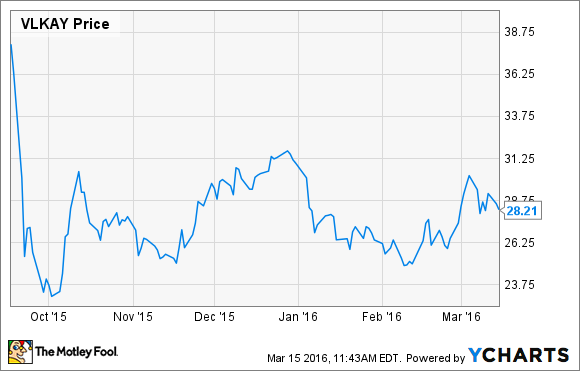 On Sept. 17 of last year, the day before the charges were announced, VW's ADRs had closed at $38.03. As of the market's close on Monday, March 15, those shares have lost just over a quarter of their value. It's easy to see why: When all is said and done, the costs of this scandal could easily run into the tens of billions of dollars, taking a bite out of VW's bottom line for the next several years.

But that said, there are still reasons why we might want to own Volkswagen. After all, this is a massive global company that sells around 10 million cars and trucks every years, and owns some of the best auto brands (Audi, Porsche) in the world. Not only that, but it's the biggest employer in Germany: It may pay a steep price for its cheating, but it's not going out of business. In its home country at least, VW is "too big to fail."

But is it a buy at current prices?

But is Volkswagen's stock really cheap?
With its stock down so far, is VW cheap?

Looking at traditional metrics, not really -- at least, not at first glance. At current prices, VW is trading at a little over 10 times its annual earnings through Sept. 30 of last year. (VW has yet to release its fourth-quarter and full-year 2015 earnings. Learn why here.)

Historically, that's a reasonable valuation for a big automaker. It doesn't look cheap. But: That trailing-12-month earnings number includes a huge special item: VW set aside 6.5 billion euros in the third quarter as a reserve against the costs of the diesel scandal.

Long story short, if we ignore the costs of the scandal and just look at VW's underlying earnings, the stock is arguably cheap.

But that's a BIG "if"
The problem is that the 6.5 billion euros that VW set aside last year is likely to be just the beginning of the scandal's financial impact. Emphasis on "likely" -- but it's that uncertainty that makes any decision to buy VW now a risky one.

VW has admitted to selling about 11 million vehicles with the emissions-cheating software all around the world. About half are in Europe, and VW has worked out a plan with the EU to "fix" them -- but the rest are spread among dozens of countries.

That means that VW could be exposed to regulatory and legal action in many different places. So far, the biggest trouble appears to be coming from the U.S., where the Department of Justice has already filed a suit against VW that could theoretically lead to roughly $46 billion in damages. But quite a few other countries are conducting civil or criminal investigations, and more fines (and criminal charges) are likely.

VW is also likely to face big lawsuits from owners -- and in the U.S. at least, its angry dealers. Awards in those cases could add another billion dollars or more to the final tally.

Right now, it's impossible to make a realistic estimate of the ultimate cost of the scandal to VW. It's possible that fines, restrictions, and litigation settlements will end up weighing on VW's bottom line for the next several years.

The upshot: Is VW cheap enough to buy?
We don't know, because we still don't know (even approximately) how much the scandal will cost. Until we know more, that uncertainty makes VW a risky buy.

And given that global auto sales are probably near a cyclical peak, and that the VW brand has been damaged by the scandal, I'm not seeing that there's enough likely growth to make the shares worth that level of risk.

If you want to own an automaker, there are much lower-risk choices available at good prices. For now at least, I'm steering clear of Volkswagen.