Struggles facing the company have resulted in a major sell-off, but there are still a lot of unanswered questions.

CEO Pearson faces a host of challenges this year.

Valeant Pharmaceuticals (BHC 8.04%) is under the gun to address a slate of difficult problems threatening it, and it's not clear when management will be able to say its struggles are truly behind it. Can Valeant Pharmaceuticals overcome the risks it's facing and make its shares one of the market's best "bad news buys" of all time?

Broken business model?
The biggest risk facing Valeant is that it's model of buying up existing medications and relaunching them with a bigger sales force and higher price is broken.

In the aftermath of a media firestorm caused by Turing Pharmaceuticals' acquisition of a 60-year-old drug, Daraprim, only to jack-up its price by an outrageous 5,000%, politicians and payers have united in a singular quest to keep a lid on drug prices.

Their plans to rein in prices eliminate a core pillar supporting Valeant's strategy, but Valeant could still reposition itself. After all, prices will still climb, just not as quickly, and volume trends should remain a major tailwind.

Valeant has built an impressive lineup of brands (Bausch & Lomb) and drugs (Jublia), and while prices will undeniably grow more slowly from here, an increasingly insured and older population should provide plenty of tailwinds to revenue. Yes, Valeant's pace of growth will slow, but demand tied to an increasingly older and insured population should still allow this company to get bigger over time.

Accounting mishaps
Scrutiny of Valeant's business model revealed an all-too-cozy relationship with the specialty pharmacy Philidor, which helped boost Valeant revenue by making sure prescriptions were filled with Valeant drugs, rather than cheaper generics, a practice that's admittedly dubious.

An independent review of Valeant's relationship with Philidor demanded by Valeant has resulted in the latter cutting ties with Philidor, but it's also led to the discovery of some accounting mistakes. Specifically, the review discovered that Valeant booked $58 million in sales when product was shipped to Philidor, rather than when it was sold by Philidor. The company will need to restate those sales on its past financials, but considering that Valeant's sales could eclipse $11 billion this year, a $58 million restatement isn't a deal breaker.

Admittedly, this review is ongoing, so other mistakes could be uncovered. However, the amounts discovered would need to be far bigger than this to pose anything but a temporary headwind for the company.

Mountainous debt
Rather than developing drugs in-house, CEO Michael Pearson has focused on acquiring companies that have already made their way to market. That strategy allowed him to contain costs and grow rapidly, but it also saddled his company with $30.9 billion in debt, $19 billion of which is due in the next nine years. Given Valeant's balance sheet only has $1.4 billion in cash, that's a lot of money to owe creditors. 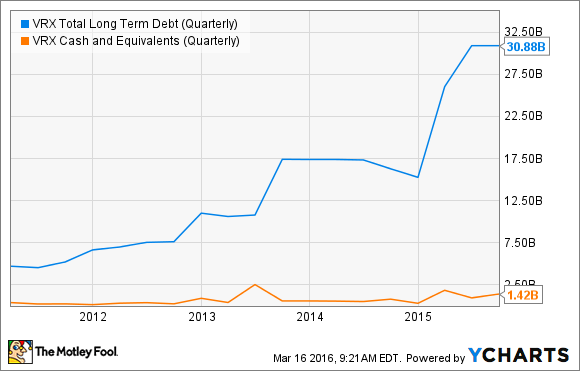 Fortunately, Valeant is a profitable company that churns out $2.45 billion in operating cash flow and can service its debt payments. However, if lenders fear Valeant won't be able to overcome its troubles, then they could pressure it into a precarious position.

Because Valeant's internal accounting review hasn't wrapped up, the company will miss its deadline to file its annual report with the Securities and Exchange Commission. That puts it in breach of covenants on its bonds, which could allow debt holders to cry foul. If they do, then Valeant could face a perilous short-term cash crunch.

Pearson hopes to convince debt holders to stay the course, and if he succeeds, Valeant can start paying down its obligations. This year, Valeant hopes to pay off $1.7 billion in debt, and while that's hardly enough, it's a good start that could help make Valeant a stronger company long term.

Slipping sales
Previously, Valeant had wanted to pay down $2.25 billion in debt this year. However, shifting away from Philidor and reining in its prices is taking a toll on its top line.

Transitioning its drug distribution strategy away from Philidor and right-pricing its medicine means its bottom line will suffer, too. Previously, Valeant was looking for EPS between $13.25 and $13.75 this year, but following its fourth-quarter performance, management is now guiding for EPS of between $9.50 and $10.50.

A new model that includes leveraging Walgreen Boots Alliance's massive retail store footprint and lower prices could boost volume long term, but this year is unquestionably one of transition and revenue and profit uncertainty.

Crumbling confidence
In so-called normal times, investors would likely be willing to give Pearson the benefit of the doubt that he'll be able to right the ship. But these aren't normal times.

Valeant Pharmaceuticals' stock has collapsed more than 80% since last summer, and that's testing the patience of even the longest-term investor. A lot of its shares are held by Bill Ackman's Pershing Square, so the sell-off could be much, much worse if Ackman decides he's had enough. That doesn't appear likely (yet). Instead, it's probably more likely that he would move to replace Pearson with someone from outside of the company.

Regardless, a turnaround in Valeant's shares will depend a lot on repairing confidence among institutional and individuals investors. That isn't going to happen overnight. Given the risks facing the company, this stock is probably best suited for investors who are both well diversified and risk tolerant. After all, while Valeant's shares are undeniably cheaper than they've been in the past, that alone doesn't necessarily make them a bargain.