With limited cash flow, this oil company could have a big problem if its funding sources dry up.

Cobalt International Energy (NYSE: CIE) isn't like your average oil company. In fact, it shares more similarities to a developmental-stage biotechnology company than an oil and gas company because, up until this January, it didn't produce a drop of oil. Instead, it spent the past few years investing only to develop offshore oil and gas resources in the Gulf of Mexico and West Africa. It's a riskier business model, which could prove to be problematic for investors until a few more of its projects start producing.

The sole focus
In building the company around offshore oil and gas projects, Cobalt is opening itself up to both pitfalls and promise. The pitfalls are the high development costs and long lead times needed to bring these projects from discovery to production. Take, for example, the recently completed Heidelberg project in the Gulf of Mexico, which is operated by Anadarko Petroleum (APC) and counts Freeport-McMoRan (FCX -0.20%) among the seven joint venture partners that also include Cobalt. Discovered in 2009, the $3 billion project wasn't given the green light until 2012 and didn't deliver first oil until this past January. Over that time frame, oil prices did this: 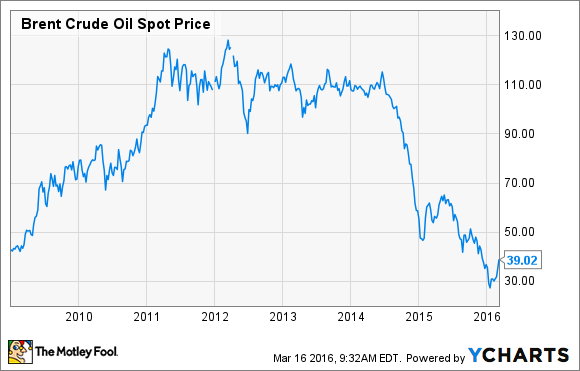 In other words, the project was sanctioned when oil prices were at their highest level, but it didn't start producing oil until its price had crashed. Needless to say, expected returns have fallen alongside the price of oil.

Having said that, the promise is pretty compelling, with Heidelberg estimated to hold recoverable resources of between 200 million to 400 million barrels of oil equivalent. Furthermore, the initial production from the field is a very meaningful 80,000 barrels of oil per day and 80 MMCF/d of natural gas, which the partners share proportionally based on their stake in the project. Also, should oil prices skyrocket, the cash flow from the field will follow suit.

Cash is king
Because offshore projects are so expensive and take a long time to develop, it can drain an oil company's resources. That's a problem that has befallen Freeport-McMoRan in recent years, with the crash in crude prices taking a huge chunk of its expected cash flows, leaving it scrambling for cash to fund its offshore developments. It's an even greater potential problem for a company like Cobalt International Energy because until Heidelberg came online it didn't generate any operational cash flow. Instead, it's only source of cash was the capital markets, with the company selling equity and convertible notes to fund its development projects.

Now that some of its projects are past the stage of promise and have some meaningful value, the company has decided to cash in, with it recently announcing the sale of its offshore assets in Angola in order to raise cash to pay for its development projects in the Gulf of Mexico. However, despite that big cash windfall, the company needs to be very mindful of its cash position, which is why it has had to cut its spending plans in order to preserve cash amid the downturn in the oil market. After planning to invest $1 billion per year through 2018 to develop its offshore discoveries, it has had to cut back to just $500 million to $600 million in annual investments in order to make sure its cash lasts.

Another potential problem with its business model is the risk/reward of working with partners. Because offshore developments are so expensive, most oil companies work together to develop these projects to reduce financial and operational risks. However, these arrangements add a new risk, which the company lays out in its annual report, noting that it "will not be able to control the timing of exploration or development efforts, associated costs, or the rate of production of any non-operated and to an extent, any non-wholly owned, assets." In other words, it might be forced to invest in a project that it doesn't have the cash to fund or is designed using a costlier technique that it would have employed. For example, Anadarko Petroleum is the operator of not only Heidelberg but Shenandoah, a major oil discovery in the Gulf. If Anadarko plans to push forward the time frame on Shenandoah and turn it into a major development, it could force Cobalt to commit capital to a project that might not be in its best interest at this time.

Investor takeaway
Cobalt International Energy is riskier than the average oil company because it is still in the early stages of the development of costly and time-consuming offshore oil and gas projects. That's a potential problem because the company needs to rely on outside sources of cash to fund these projects instead of internally generated cash flow, and it's not always in control of the timing nor the costs of these projects. It's a problem that could force the company to make decisions that aren't always in the best interests of shareholders, which is an extra risk that investors need to keep in mind.