The Blaze is Fitbit's attempt to move into the smartwatch market. Image source: Fitbit.

Fitbit (NYSE:FIT) has become a major conundrum for investors looking to find high potential tech stocks today. The company has the largest market share in wearables according to IDC, but it's losing share, and has some built in hurdles compared to emerging rivals like Apple (NASDAQ:AAPL), Samsung, and even Garmin (NYSE:GRMN).

On the plus side, its stock looks fairly cheap at 20 times trailing earnings and 10 times next year's earning estimates. Long-term, though, does that make it a value stock or a sinking ship in the tech sector?

Fitbit's biggest challenge
When Fitbit burst onto the scene a few years ago, it was charting new territory in wearables. It brought new activity tracking capabilities to a simple device that was affordable for the masses.

But today's market is a completely different beast. Tech giants like Apple (NASDAQ:AAPL) and Samsung are building wearables with ecosystem access Fitbit can't compete with, and niche players like Garmin (NYSE:GRMN) are dominating the GPS-enabled wearable market.

The biggest problem Fitbit has is that it doesn't have the same infrastructure as its larger rivals. It can't open a massive app store for its watch like Apple or Samsung, which are just scratching the surface of what wearables could become to their own businesses. As the Apple Watch and Samsung Gear add functionality and reduce costs, why wear an activity tracker? And if you're going to get a smartwatch, why not get one from a company with an app ecosystem to leverage the apps you use on your smartphone everyday?

The upside for Fitbit
What Fitbit has going for it is that it's a profitable, growing business. That's a strong starting place, even if you're going up against large competitors like Apple and Samsung. 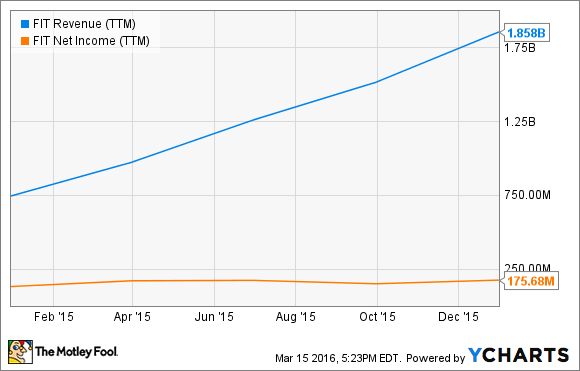 There's also a lot of brand awareness for Fitbit. The company has become ubiquitous among daily activity trackers, and I could see the company expanding further into more advanced products. Of course, then you run into Apple and Samsung on the smartwatch side and Garmin on the niche GPS-capable side.

Fitbit has an uphill battle ahead
If you just look at Fitbit's past financial performance, it's easy to make a very simple bullish case. But look at the competitive landscape and I don't see where the company fits into the market just a few years from now.

Apple and Samsung are leading the smartwatch revolution and will keep adding capabilities that will attract high-end buyers. Their ecosystems will make it nearly impossible for a company like Fitbit to play anything more than a small role in that market.

Garmin, on the other hand, has a dominant position in the high-end GPS-enabled activity market, which Fitbit is starting to move into. The best solution may be to combine forces with Garmin to offer a complete suite of fitness wearables and accompanying software and apps.

Building a long-term business may be more difficult than it appears on the surface for Fitbit. Competitors are encroaching on its space, and there's no competitive moat keeping them out. That's a big problem for Fitbit, and why I think it has a long road ahead. You've been warned.