Find out why ONEOK, despite its tollbooth business model, suffered a pretty bad 2015 and why 2016 isn't looking to be much better.

Thanks to the worst energy crash in 50 years, the oil and gas industry is littered with high-yield dividend stocks, both high and low quality, offering seemingly tempting undervalued, long-term income opportunities. One such example is ONEOK Partners (NYSE: OKS) and its sponsor and general partner, ONEOK (NYSE: OKE), which have followed the rest of the MLP industry into a deep price collapse over the past year. 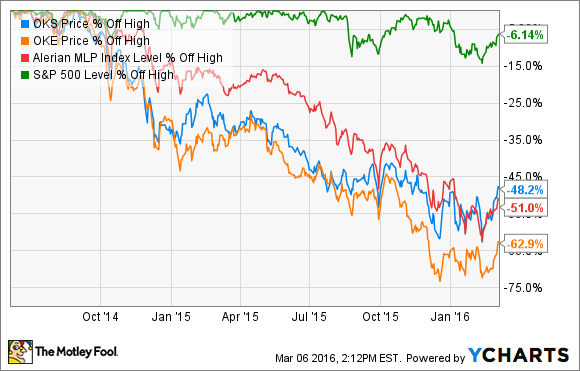 Of course, the hard part for investors to determine whether ONEOK represents a great MLP trading at a very attractive price, or a subpar pipeline operator that's been understandably punished by Wall Street for some major risks to its business model.

Find out three reasons from ONEOK's 2015 results why I believe ONEOK remains a highly speculative investment in 2016 -- one that's inferior to many of is higher-quality competitors.

2015 results: solid volume growth, but not good where it matters most

Thanks to new projects coming online in 2015, ONEOK was able to deliver a 44% and 12% increase in NGL and natural gas volumes, respectively. Because of record low commodity prices, this volume growth wasn't enough to prevent its DCF and coverage ratio from falling to unsustainable levels. This situation was partially due to ONEOK Partners' need to raise $749 million in equity capital from ONEOK earlier in the year, which resulted in 11.2% investor dilution.

On the plus side, in January, ONEOK Partners managed to obtain a $1 billion three-year unsecured loan. Combined with a one-year extension of an existing $2.4 billion credit facility that has $1.8 billion in remaining borrowing power, management believes it can operate well into 2017 before needing to raise additional capital.

ONEOK is currently priced as if its current distribution is at high risk of a short-term cut, and analysts expect it to barely grow over the next half-decade. Of course, analyst forecasts can easily prove wrong, since Wall Street is notoriously short-term-focused and often incorrectly assumes that recent trends will continue for many years.

So what are the chances that the market is wrong about ONEOK's payout sustainability and growth prospects? Well, ONEOK Partners offered guidance of 22% DCF growth for 2016, which, assuming no further unit count growth, should be sufficient to secure its current distribution. 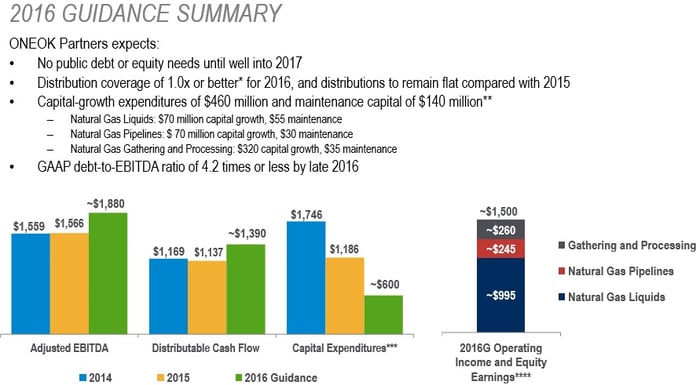 However, the oil crisis has shown that management forecasts must always be taken with a grain of salt, because they're based on certain energy price assumptions that can easily prove overly optimistic. For example, for 2016 ONEOK is assuming that oil prices will average $42.50 per barrel, which, despite oil's impressive rally over the past few weeks, might very well prove incorrect.

Another risk potential ONEOK investors should be aware of is that ONEOK Partners does have direct exposure to commodity prices, which it attempts to minimize through hedging. However, as the following table illustrates, starting in 2017 its highly profitable hedges will start expiring, and barring a sharp energy price recovery over the next year, it could face cash flow pressure in 2017 that might continue to threaten the long-term sustainability of its current distribution.

That's especially true given that natural gas and NGL prices are trading substantially below the price it's currently receiving because of these hedging contracts. 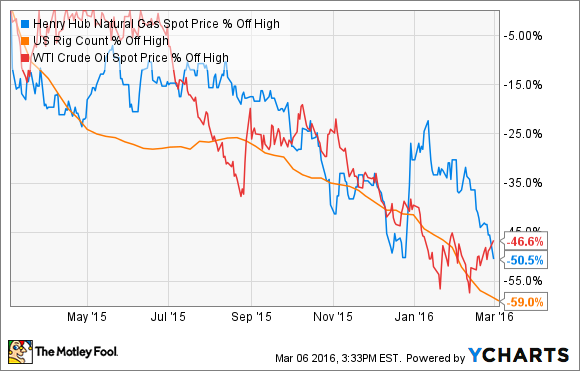 If energy prices remain at current levels, or potentially fall further, ONEOK Partners' cash flows could be at risk. This is because, despite, 85% of 2016's earnings expected to be fee-based, ONEOK's NGL business still exposes it to a significant amount of volume risk. In fact currently 1/3 of the ethane that could be going into its NGL transportation network is being rejected due to natural gas liquid prices being at 13 year lows. .

In addition, in 2015, 17% of ONEOK's natural gas business was from producer demand, meaning that the MLP faces a potentially significant risk of declining gas volumes should low gas prices continue reducing rig counts and investment in new drilling.

Bottom line
ONEOK isn't close to being the worst midstream MLP you can buy today. Its recent capital raises probably give it sufficient breathing room to wait for energy prices to recover, which could greatly improve its long-term growth thesis.

That being said, investors need to realize that ONEOK remains a highly speculative, short-term bet that oil and gas will recover before it needs to raise more capital, potentially at higher and unprofitable levels. Given there are other midstream choices available that offer more secure, attractive yields and superior growth prospects even in a world of low energy prices, it probably isn't the best time for dividend investors invest new money into ONEOK at this time.