Please ensure Javascript is enabled for purposes of website accessibility
Log In Help Join The Motley Fool
Free Article Join Over 1 Million Premium Members And Get More In-Depth Stock Guidance and Research
By Keith Noonan, Tim Beyers, and Daniel B. Kline - Mar 21, 2016 at 7:00AM

These three stocks have poisonous characteristics that could turn your portfolio sour.

Tech stocks have gotten off to a rocky start in the opening months of 2016, and for some companies, the worst is yet to come. Stocks with lofty growth targets are facing extra scrutiny, and regardless of what happens with the broader market and tech sector, companies with valuations that exceed their potential are bound to cost investors over time. Companies without strong fundamentals are toxic to portfolios, and that's true no matter what the broader market is doing.

To help readers steer clear of potential problem stocks, we asked three Motley Fool writers to identify a company that could prove hazardous to your wealth. Read on to learn which companies could sap your investment dollars.

Daniel B. Kline: On the surface, SiriusXM (SIRI 0.33%) looks like a healthy company. In fact the satellite-radio provider had record revenue in 2015 of $4.6 billion, up 9% over the previous year. In addition, the subscription service also increased its subscriber base to nearly 30 million people. It added 2,283,000 net new subscribers in 2015, the highest growth in net subscribers since 2007, before Sirius and XM merged.

On the surface, those numbers, plus the fact that Howard Stern signed a new five-year contract, keeping the company's biggest draw in place. That's good, as is the subscriber and revenue growth, but it can't mask the company's underlying problem -- satellite radio becomes less needed every day.

When Sirius and XM first launched, their competition was mostly terrestrial radio and people's CD collections. Back then, the idea of offering custom music stations that were much more focused than the ones on local radio made sense. Now, with the rise of Spotify and other all-you-can-listen music services, those channels seem like a quaint antiquity.

Similarly, one of the other major draws of satellite -- top-tier talk has become increasingly less exclusive. Yes, satellite has Stern, but there are countless high-quality programs offered as free podcasts. Unless you're a diehard fan of the "King of All Media" there is no reason to pay for SiriusXM for talk. That really leaves sports as the only unique draw of the satellite service and in the long-run that won't be enough.

SiriusXM may have years left and it may even still be on a growth curve for now, but don't fooled. Even though the company looks healthy, it's slowly becoming irrelevant, and that trend will accelerate as more cars start to come with built-in wireless or more consumers move to wireless carriers which offer unlimited data. The company has a good product, but the need for it is rapidly declining and at some point -- and it could happen quickly -- its customer base will realize its paying for things it either already pays for (music) or can get for free (talk).

Tim Beyers (Zynga): Toxic stocks take many forms. Some are illicit. Others are drastically overvalued and ripe for a fall. Still others are lacking catalysts and the sort of competitive advantage you'd expect from an outperformer.

Zynga (ZNGA), now led by its third CEO in less than five years, is neither illicit nor sharply overvalued. But as a business it's about as weak as you can get and still trade for better than $2 billion in market cap.

Investors know it, too, which is why the stock has plummeted over 75% since its December 2011 IPO: 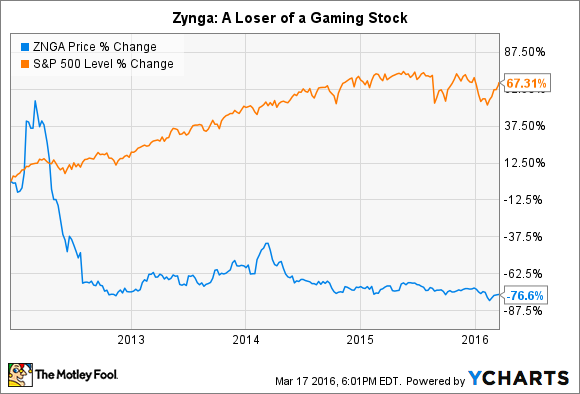 And yet some on Wall Street see signs of a turnaround in the form of new chief Frank Gibeau, who replaced Zynga founder Mark Pincus on March 7 after spending seven months on the board and 20 years at Electronic Arts (EA -0.96%). The stock is up over 19% in response to Gibeau's appointment.

The hope, it seems, is that Gibeau can unlock innovation at a company that's never been known for innovating anything. In 2012, EA filed a copyright claim in which it argued that Zynga's The Ville had all but copied The Sims Social. Ironically, Gibeau was a key executive at EA Mobile at the time of the suit. Now he gets a chance to lead his one-time competitor.

Does he have what it takes to turn Zynga around? Maybe. Selling the company's San Francisco headquarters building -- purchased for $228 million four years ago -- could provide the capital necessary to make needed investments; whether they pay off is the question. History says it's unlikely. And with Zynga right now producing no profits and negative cash flow, there isn't much financial incentive to bet that Gibeau can do what Pincus never could.

Keith Noonan: Yelp (YELP -2.46%) has lost more than 50% of its valuation in the past year and trades at a roughly 80% discount from its lifetime high of roughly $101, but the stock still looks like a money trap. The online reviews specialist has seen its revenue growth slow and its meager earnings turn to losses, and one of the strongest cases for owning the stock is the hope that the company will be acquired by a wealthy suitor -- not an attractive proposition to bet on.

The company's recently delivered quarterly report delivered better sales than the average analyst estimate anticipated, but it also marked the company's fourth consecutive quarter of losses, and rising costs should be a major red flag for investors. Marketing its services is becoming more expensive, and the company is in the midst of a big hiring push without an obvious way to boost revenue growth -- suggesting that investors will keep seeing red in quarters to come. Operating losses wouldn't be such an issue if the company's plan to reinvest in itself and its platform looked like it would be more fruitful, but the company's prospects outside of acquisition appear dim.

The Yelp brand is still powerful, but nagging controversies are chipping away at its positive associations, and the potential for a resource-and-network rich competitor like Facebook to disrupt the online reviews space poses a substantial risk for investors. Business-owners are still making public complaints about the way that Yelp's review platform gives preferential listings to its subscribers, and a declining trust in user reviews set the stage for a company with a big network advantage to move in on Yelp's territory.

A steep valuation decline and the possibility of a looming acquisition may create incentives to give Yelp consideration, but hoping that another party will come along and pay top dollar to acquire a business that's in questionable shape is a strategy that can poison your portfolio.