Even if the dividend ends up being maintained, investors must ask themselves if it's creating shareholder value.

Royal Dutch Shell (RDS.A) (RDS.B) has always been an outsized dividend payer. From 2011 to 2014, its annual yield averaged roughly 5%, almost double that of its most comparable competitor, ExxonMobil (XOM 1.67%). Since oil started falling over 18 months ago, however, that yield has been pushed up to levels as high as 9%.

How long can such a high yield be sustained? 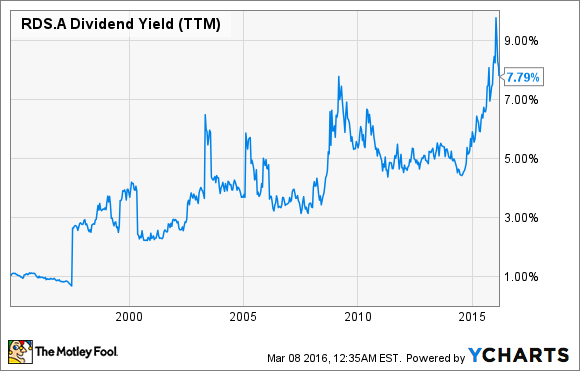 Don't bank on management's guarantee
Last year, management guaranteed its dividend for at least the next seven quarters. "We are confident that in 2015 [then the current financial year] it is going to be $1.80 per share and in 2016 at least that," said CEO Ben van Beurden.

Things have changed quite a bit since that guarantee was made. Despite a recent rally, oil still remains under $40 a barrel. According to Beurden, Shell's all-in breakeven price is roughly $50 a barrel. Shell can sell assets, cut spending, take on additional debt, or issue shares to plug the cash flow gap, but as long as oil remains under $50, the long-term viability of the dividend has to be in question.

While the long-term trajectory of oil prices is constantly debated, Shell seems determined to somehow maintain its 8% dividend. There are a few quick fixes, but it won't be easy. Operating cash flow last year was just $30 billion, only capable of covering the company's massive capital expenditure needs, not to mention the $12 billion dividend. Meanwhile, production is falling and its largest projects aren't expected to start up until 2017. Even if oil prices slowly start to improve, Shell is set for a cash crunch.

What can Shell do over the next 12 months to sustain the dividend while waiting for a rebound?
First, it can focus on generating cost synergies after its $70 billion merger with BG Group. It's already announced 10,000 job cuts in an effort to save $3 billion in operating costs this year. Further lowering capital expenditures is also a quick fix. Project spending (combined with BG Group's) is expected to be $33 billion this year, down roughly 50% from peak levels set in 2013. With production starting to decline, however, this may prove to be robbing Peter to pay Paul.

Lastly, it can sell assets, of which it has plans to offload $30 billion worth. It certainly isn't a sellers market, however, and Bloomberg believes that a soft market outlook "may hinder Shell's efforts to find buyers for the assets." Of the $30 billion in earmarked asset sales, less than $10 billion is expected to be realized this year while the market remains weak.

A rock and a hard place
In all, Shell's best options for sustaining its dividend are less that stellar. Synergies notoriously come in lower than expected, further capital expenditure cuts will only exacerbate the current production cliff, and asset sales will likely come at buyers' prices, if they come at all. The long-term outlook is even more dire, barring a massive, sustained rebound in the oil markets.

The good news is that Shell can probably continue taking on more leverage. Its debt-to-equity currently stands at just 36%. Compare this with a close competitor such as BP (BP 7.68%), which comes in at 55%. ExxonMobil, frequently known as the most conservative operator, stands at just 22%.. And while Moody's recently put its credit rating under review, it still has an Aa1 rating. That, along with its $150 billion market cap, should allow it to tap the low-interest rate debt markets throughout the downturn.

Investor takeaway
As Shell tacks on debt to plug its cash flow deficit, investors must ask themselves if management is really creating shareholder value by upholding its $12 billion dividend plan. Sure, Shell could sustain the dividend by further cutting investment and production, selling assets at depressed prices, or boosting debt levels, but those things would likely destroy value over the long-run. So while the 8% yield may be safe, don't buy shares solely for the payout, as you may end up paying for it with a lower stock price.

Vanzo has no position in any stocks mentioned. The Motley Fool owns shares of ExxonMobil. The Motley Fool recommends Moody's. We Fools may not all hold the same opinions, but we all believe that considering a diverse range of insights makes us better investors. The Motley Fool has a disclosure policy.

Shell Plans to Cut Thousands of Jobs Amid Shift to Carbon Neutrality: What Investors Need to Know
409%