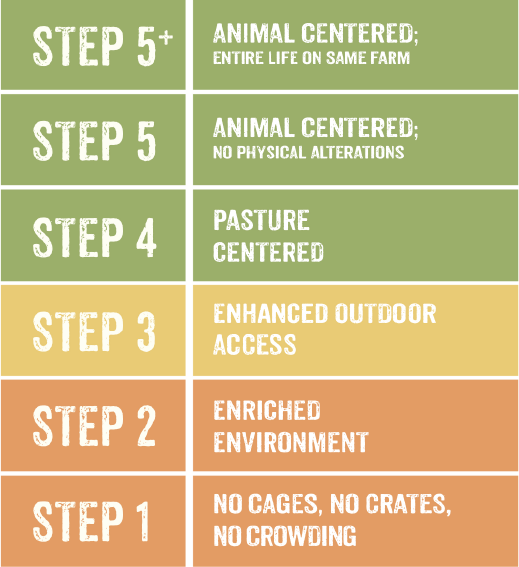 Last week, the non-profit Global Animal Partnership (GAP) announced a commitment to replace 100% of faster-growing chicken breeds with slower-growing ones on every step of its rating scale, pictured above. Whole Foods Market (WFM), a highly visible member of the partnership, quickly praised the initiative, which will be completed by 2024.

As explained in GAP's press release, 98% of all commercially sold chicken meat in North America is derived from breeds of fast-growing chickens. The non-profit stated the following: "Modern chickens have been genetically selected for their fast, efficient growth and higher yield of breast meat," leading to "detrimental impacts on the welfare of broiler chickens, including immune and musculoskeletal problems, resulting in limitations to the bird's ability to express natural behaviors like perching, flying, and even walking."

The enhancement of current standards will require farms in the partnership to use breeds that grow at a 23% slower rate than conventional chickens. The standards will also result in a lower stocking density per square foot, equivalent to 25% more space for chickens being raised under the program. Finally, existing enrichment provisions will be expanded to provide for perches, straw bales, and more natural light in breeding areas.

Whole Foods' own press release on the move to lower growth rate breeds expressed "support" for what it characterized as a response to "unresolvable welfare issues inherent in fast-growing breeds of chicken." The grocer's endorsement is a de facto commitment to this program, as all Whole Foods meat suppliers are required to achieve at least a "Step 1" rating in order to do business with the company.

Whole Foods has several persuasive reasons to endorse what in practice will be a time-consuming and costly effort on the part of its suppliers. First and perhaps most obviously, a transition to slower-growing breeds furthers the goal of improving animal welfare, of which Whole Foods has long been an advocate. GAP's five-step rating program actually evolved out of Whole Foods' own efforts to ensure its suppliers were following best practices for what is often referred to as "humanely raised meat."

Differentiation is a favored tool among Whole Foods executives as they attempt to neutralize the effects of selective price concessions the company is currently making to fend off a wide array of competitors. The chicken breed initiative signals that the company's values are consonant with those of its most loyal customers.

However, management also grasps that a multi-year upgrade of Whole Foods' existing supplier standards will put some distance between it and competitors when consumers weigh brands in the future. It's taken most of Whole Foods' time as a publicly traded company for natural and organic foods to become mainstream. Yet in the eight years in which this standard will be implemented among the 600 farms in the partnership -- which produce 277 million chickens annually -- the mainstream may have well moved on to a more acute awareness of animal welfare.

GAP's announcement also helps to resolve some long-standing criticism of the five-step scale in that potential suppliers to Whole Foods can at present simply achieve a Step 1 rating in order to sell to the company, with no further requirement to achieve a higher rating. Whole Foods itself has always seen the scale as transitional, meaning it gives smaller suppliers a way to get on the company's coveted vendor list, with the expectation that as profits grow, good partners will work their way up the ratings ladder. Now all chicken suppliers have a steeper hurdle to clear in order to continue contracting with the grocer, but they've been given a reasonable time frame for implementation.

Of course, implementing higher quality is rarely free. Will the standards enhancement push up prices in Whole Foods' meat cases? The company's patrons can expect to see a gradual inflation of chicken prices over the next eight years as suppliers incur the costs of replacing genetic strains and comply with other aspects of the standards by year 2024.

Still, such cost inflation and the resultant price differentials are part of the point of this exercise. Whole Foods is in business to make a decent profit by providing a differentiated shopping experience for its core customers. The company achieved its first phase of growth by offering a value proposition that couldn't readily be found elsewhere. Its next phase of growth will hinge on continued differentiation that an ever-growing base of loyalists values -- and is willing to pay incrementally more for.