Facebook stock is up by 300% in the past few years. More importantly, the social network is poised for additional gains in the years ahead.

Facebook (META 7.89%) stock has been a spectacularly profitable investment over the past several years. Shares of the social network are up by almost 300% since January of 2013. Let's look at the main reasons behind such an impressive performance and, perhaps more important, whether it's too late buy Facebook or if the stock still offers more room for gains from current price levels.

Facebook is making tons of friends in the market
Facebook is delivering impressive performance in terms of both user and revenue growth. The company ended the fourth quarter of 2015 with 1.59 billion monthly users, a 14% year-over-year increase. Daily active users stood at 1.04 billion as of December, a 17% annual increase. Since daily users are growing at a faster rate than monthly ones, this shows that engagement is on the rise, a major positive when evaluating the company's ability to sustain growth.

As a reference, Twitter (TWTR) reported only 305 million monthly users when excluding SMS Fast followers in the fourth quarter of 2015. Not only that, but Twitter's user base also grew only 6% year over year during the quarter, and it remained flat in comparison with the third quarter of 2015. Twitter fully acknowledges that it needs to gain more traction among potential users, so management is implementing a series of initiatives to make the user experience simpler and more enjoyable. Whether Twitter can jump-start growth still remains to be seen, but the difference in size and growth between the two social networks speaks wonders about Facebook and its management team.

The company is also doing a great job at translating user growth into increasing revenue for investors. Facebook produced $5.8 billion in total sales during the fourth quarter of 2015, a 57% increase in U.S. dollars and an even stronger 66% jump in constant currency terms versus the same quarter in the prior year.

The business is doing particularly well in mobile, a crucial segment in the industry, since most of the growth in traffic is coming from mobile devices nowadays. Facebook reported 934 million mobile daily users last quarter, a vigorous 25% increase. Mobile advertising revenue accounted for a huge 80% of total revenue during the period.

Is it too late to buy Facebook?
Facebook stock is priced for demanding expectations, as it carries a forward price-to-earnings ratio in the neighborhood of 30 times earnings forecasts for the coming year. That's almost double the average forward price-to-earnings ratio for companies in the S&P 500 index, around 17. On the other hand, the company certainly deserves a valuation premium as long as it can continue delivering above-average growth rates, and everything indicates that Facebook still has significant room for expansion.

User growth will most probably decelerate in the middle term, since most of the low-hanging fruit has already been collected and growth tends to naturally slow down as a platform reaches such a gargantuan size. However, Facebook still has considerable room to increase monetization levels around the world. 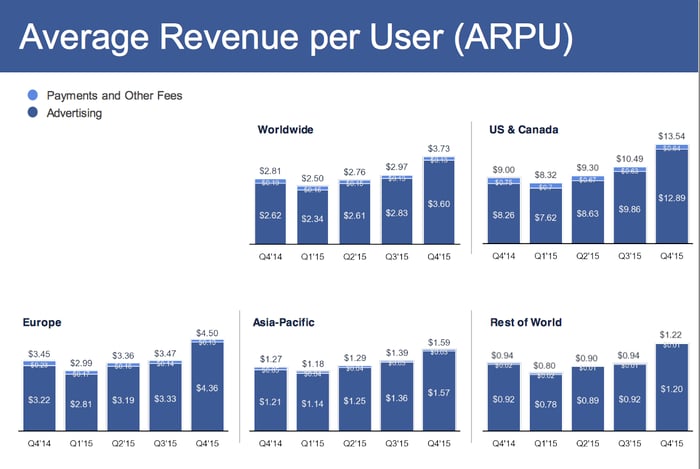 It's important to pay close attention to advertising sales in terms of the amount of ads versus the price of those ads. Management needs to be careful not to hurt the user experience by placing too many adds. However, as long as those ads are increasingly effective, advertisers will be willing to pay higher prices per unit. According to management, the amount of ad impressions grew 29%, while the average price per ad jumped 21% in the fourth quarter of 2015.

In terms of market share, Alphabet (GOOG 6.30%) (GOOGL 6.09%) is the global king in online advertising thanks to the enormous popularity of its Google search engine and other massively valuable online properties. Alphabet produced almost $75 billion in total revenue during 2015, meaning Facebook is only 27% the size of Alphabet in terms of annual sales. On the other hand, Facebook is growing at a much faster rate, with total revenue increasing by 43% versus a 14% sales increase for Alphabet during the full year 2015.

That Facebook is materially smaller than Alphabet has both some pros and cons for investors, but it clearly has positive implications in terms of growth rates going forward. As the second biggest player in the industry behind Alphabet, it's easier for Facebook to sustain rapid growth and steal market share away from the industry leader.

Facebook is delivering explosive performance, and the company still has significant room for expansion over the middle term. Aggressive valuation is an important risk factor to keep in mind. Nevertheless, Facebook looks well positioned to continue delivering market-beating returns in the years ahead.