This company has a bad habit of losing money and selling stock.

Shares of Plug Power (PLUG 3.68%) have surged 19% over the past month, hitting a recent high of $2 and change -- and all of this came on top of the stock's one-day, 16% pop enjoyed after Plug reported fourth-quarter earnings results on March 10. With this strong momentum at the company's back, TheStreet.com recently argued that it's time to "buy Plug Power now."

They're wrong about that, though. Here's why. 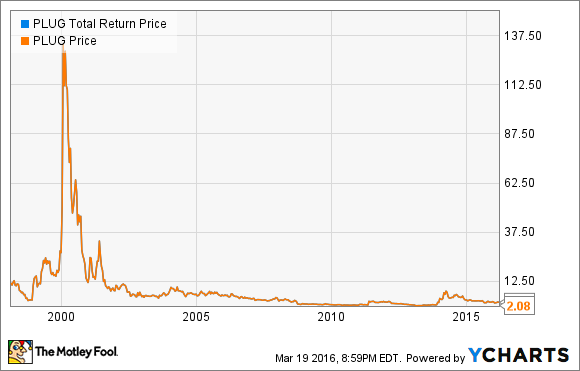 Plug Power was huge in 2000. Not so much since... PLUG Total Return Price data by YCharts.

There was plenty of good news to report in Plug Power's 2015 earnings announcement. Sales for the year shot up 61% compared to 2014 levels, surpassing $103 million for the year. Gross margins grew, and the company even "beat earnings" in Q4 (by losing less money than expected).

None of that is the problem, though. The real problem at Plug Power is...

History
Plug Power sold a lot of fuel cells last year, no doubt. But here's the thing: No matter how much product Plug Power sells, the company never seems to profit from it. Financial data warehouse S&P Global Market Intelligence contains 20 years of financial data on Plug Power, going back all the way to 1997. Not one of those years, however, saw Plug Power generate a single penny's worth of profit. (Free cash flow was also negative in each of these years.)

A problem with the business model
So how does Plug Power remain in business, you ask? Primarily by selling stock -- of which it has an infinite supply. In 1997, Plug Power had 9.5 million shares outstanding. Today it has more than 180 million shares (about a 20-fold increase). The money brought in by issuing and selling all the new shares has kept the company afloat -- at the cost of diluting the original shareholders out of about 95% of their investment.

Don't get me wrong: Plug can keep this up for a very long time, and probably will. Currently, the company has $64 million in cash versus just $2 million in debt. At its current $51 million-a-year cash-burn rate, that's enough money to keep the doors open and the lights on for at least another year.

Analysts who follow the company don't see any chance of profits or free cash flow materializing this year or next year, either (and decline to even guess at what comes after that). So absent positive free cash flow miraculously appearing, sometime in early 2017 you should be reading about another secondary share issuance at Plug.

What it means for investors
Is it possible that Plug Power will ride its recent sales success to profits, escape the shackles of its history, and see its stock rise, and thrive? Of course it is. Anything's possible -- but 20 years of history argue strongly against it.