Like many solar companies, SunPower (NASDAQ: SPWR) stock hasn't performed well this year. Since January 1, SunPower shares have fallen around 17% versus the S&P 500's 0.4% advance. Some of SunPower's weakness can be attributed to its lackluster fourth quarter results and mixed 2016 outlook. Given the tax breaks for solar and the strong economy in the United States, investors were hoping for more growth than what SunPower delivered.

Despite the mixed outlook, SunPower's long term future looks bright given its 14GW project pipeline which grew in all major geographies in the quarter. The company has several competitive advantages versus its peers and is well positioned for strong long-term growth. Below are three key takeaways from the earnings report:

1. Soft fourth quarter results and 2016 mixed guidance
Although the company beat earnings and revenue expectations for its fourth quarter, SunPower provided lower-than-expected 2016 guidance. For the year in question, SunPower expects revenues of $2.2-$2.4 billion, gross margin of 17%-19%, watts deployed of 1.7GW-2 GW, and net income of flat to $50 million. SunPower's 2016 revenue guidance is a little lower than analyst revenue expectations of $2.42 billion, and its 2016 gross margin is lower than its 2015 gross margin of 23.9%. Because SunPower's GAAP net income guidance is affected by its HoldCo strategy and its drop downs to its yieldco 8point3 Energy Partners (NASDAQ: CAFD), SunPower's net income doesn't accurately reflect the value that it generates. A better metric would be EBITDA, which management expects to be in the range of $450-$500 million. While $450-500 million is in-line with the previous guidance on an adjusted basis, the EBITDA guidance range is seemingly lower than the market's expectations.

2. Strong balance sheet and low cost of capital
With around $1 billion in cash, an undrawn revolver, and a rich corporate parent in Total (NYSE: TOT), SunPower has one of the strongest balance sheets in the sector. Because it has a strong balance sheet, SunPower isn't in danger of overstretching itself like SunEdison (NYSE: SUNE) did, and has plenty of liquidity to self-fund its future growth needs. Moreover, SunPower has an additional low-cost growth option in its yieldco 8point3 Energy Partners, which pays a dividend of just 5.53%. (8point3 Energy Partners is also First Solar (NASDAQ: FSLR)'s yieldco too). Because 8point3 Energy Partners' dividend yield is low, the yieldco can grow, and SunPower can profitably drop down assets, realize higher margins, and capture more value in the long run.

SunPower's strong liquidity profile and its healthy yieldco keep the company's cost of capital low, which in turn increases its profit margins and future growth prospects. 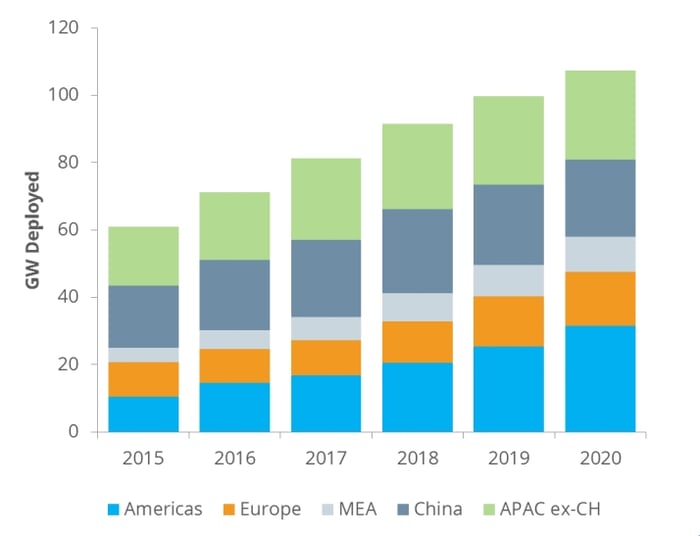 Because of the expected growth ahead, SunPower plans to increase its annual module production capacity to 4GW by 2019, up from 2015's 1.15GW deployed. If SunPower's production more than triples, its revenues and profits will be considerably higher too.

4. Making progress on the P Series
SunPower made strong progress in its cost reduction roadmap and officially launched its Performance Series (P Series) product line in the fourth quarter. Currently SunPower's existing products are the most efficient on the market, but also comparatively cost a lot to produce. With the P Series, SunPower will retain its high efficiency but manufacture the panels at more competitive prices. The more competitive manufacturing costs will increase SunPower's margins. Management hopes to produce as much as 600 MW of the P Series by 2017 and potentially as much as 2GW by 2020.

Investor takeaway
Although solar's correlation with crude prices has trimmed valuations across the sector, SunPower is a great stock to own. SunPower has a strong balance sheet, a low cost of capital, and the sector technology lead. Congress' extension of the ITC ensures that demand will rise each year, and SunPower's growing HoldCo and yieldco will allow the company to capture more of the value it creates for the years ahead.

TMFJay22 has no position in any stocks mentioned. The Motley Fool recommends Total (ADR). We Fools may not all hold the same opinions, but we all believe that considering a diverse range of insights makes us better investors. The Motley Fool has a disclosure policy.