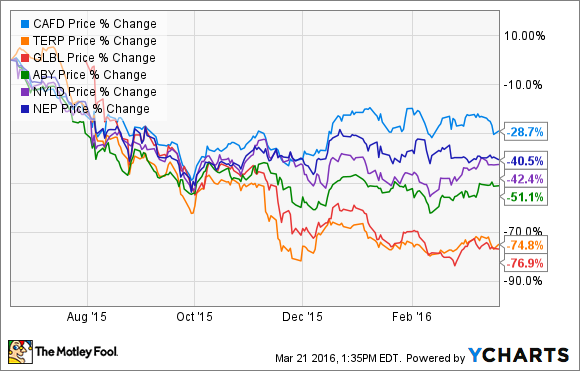 8point3 Energy Partners' fundamentals have also improved. Since its IPO in the middle of 2015, the company's cash available for distribution has jumped from $6.7 million in third quarter to $16.3 million in fourth quarter.Given 8point3 Energy's strong fundamentals, there are two reasons to believe that the company will continue to deliver value to its shareholders.

1. The yieldco has a strong parent
As TerraForm Power and TerraForm Global illustrate, a yieldco is only as strong as its parents. Because their parent, SunEdison (NYSE: SUNE), was in trouble, the TerraForm yieldcos, no matter how strong their fundamentals were, also ran into trouble. Because SunEdison ran into liquidity problems, it tried to force TerraForm Power to do disadvantageous things such as buying assets for more than what analysts thought they were worth. That situation led many investors to distrust TerraForm Power and to discount its stock price.

Fortunately for its shareholders, 8point3 Energy's parents, First Solar (NASDAQ: FSLR) and SunPower (NASDAQ: SPWR), are among the strongest in the industry. SunPower has $1 billion in cash on its balance sheet and is majority owned by a financially strong parent, Total S.A. . First Solar has a net cash balance of $1.5 billion and is profitable. Because of their financial strength, both companies will be around for a long time and won't suffer the same type of liquidity death spiral as SunEdison did.

2. The company is in the right sector at the right time
8point3 Energy is in the right sector. Because the ITC has been extended, solar demand will be strong. Bloomberg Energy estimates that the tax credit extension will add 37 gigawatts of new solar and wind capacity over the next five years and will facilitate as much as $73 billion in new spending in the industry over the same time period.

Because of the strong sector growth, 8point3 Energy's parents expect to grow substantially. First Solar reported a book-to-bill ratio of 1.2 for 2015 and expects to expand its module production by 20% year over year for 2016. SunPower expects to triple its production to 4 GW in 2019 from 2015 levels. Because 8point3 Energy's cost of equity is low given its 6% dividend yield, 8point3 Energy can expect a lot of asset dropdowns and growth ahead. Indeed, for 2016, 8point3 Energy expects its distribution to grow by 12%-15%. .

Not all yieldcos are the same
Given its low cost of equity, its two strong parents, and the solar industry's growth prospects, 8point3 Energy has a promising future. The yieldco will benefit from the ITC extension and should grow its distribution by 12% to 15% this year. If crude prices continue to rally, MLP valuations will increase, and 8point3 Energy shares will be more attractive in terms of relative yield, too.