It's not hard to understand why Wall Street has hated oil and gas stocks over the past year. With crude prices crashing to a 13-year low of around $26 per barrel, even midstream MLPs such as Sunoco Logistics Partners (NYSE: SXL), which has delivered some of the strongest growth in its industry in recent years, weren't spared the pain. 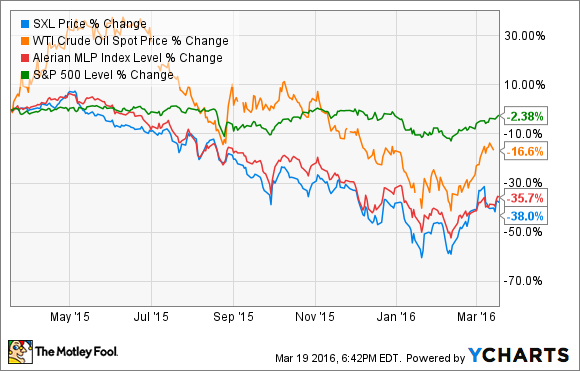 However, with oil recently rallying around 50% from its recent lows and Sunoco Logistics Partners still down sharply over the past year, long-term income investors may be wondering whether it's still worth considering this high-yield MLP for a spot in your diversified dividend portfolio.

Let's look at Sunoco Logistics Partners' 2015 results, as well as its growth plans, to see why there are two reasons you may want to avoid this seemingly impressive MLP, even if oil prices truly have bottomed.

Last year's solid growth was due to four new oil, NGL, and refined projects that entered service in 2015.

When combined with a strong balance sheet and ongoing access to debt and equity capital growth markets -- Sunoco Logistics raised $1.2 billion in debt and equity in 2015 -- and up to $2.65 billion in available borrowing power under its revolving credit facility, the MLP seems to be set for another strong year in 2016 and 2017.

That's especially true given its plans for further organic growth spending over the next two years. 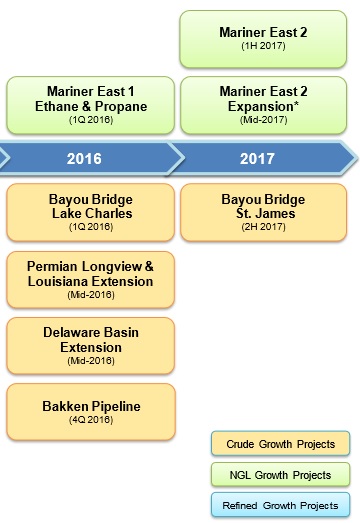 So why am I so wary about recommending an investment in what appears to be a fast-growing and financially sound MLP -- one backed by the might of the Energy Transfer empire? The answer is twofold.

Initially, Sunoco Logistics Partners' distribution profile seems strong, with its generous yield well covered by its cash flow, which is protected by long-term, fixed-fee contracts. So what's my concern?

As Energy Transfer Partners' recent growth troubles have shown, in the highly capital-intensive midstream industry, being too reliant on debt and equity funding can be perilous.

But what about Sunoco Logistics' excess DCF? While $146.5 million is nothing to sneeze at, it represents just 5.2% of the MLP's total capital spending in 2015. Given management's track record of aggressive payout growth, I doubt its percentage of retained DCF is going to rise above its current 16.7% anytime soon.

Which brings me to my biggest concern with Sunoco Logistics, and why I recommend income investors avoid it.

Sunoco Logistics Partners' ROIC has a tendency to be below its cost of capital, a trend that only worsened in its latest quarter. It's concerning because it means the MLP is losing money on its projects. Only continuous new capital in the form of debt and equity sales is what's allowing it to keep DCF and distribution growth going.

While it's possible that Sunoco Logistics could turn things around in the future, I don't think that's likely. Its current debt has an average interest rate of 1.47%, while in Q4 it borrowed an additional $1 billion at a weighted average cost of 5%.

This means the MLP's future capital costs will probably rise, accelerating the rate at which it burns through investor capital. Combined with a shrinking coverage ratio because of management's desire to keep its unit price up through continued distribution growth, and you have an MLP that's likely to only become more dependent on the external capital for its future growth.

Bottom line
Thanks to Wall Street's overreaction to the worst oil crash in 50 years, undervalued, high-quality, high-yield midstream MLPs aren't hard to find these days. With better alternatives available -- ones that actually make returns on investor capital -- such as Magellan Midstream Partners,it's hard to justify making an investment in Sunoco Logistics Partners at this time.