Please ensure Javascript is enabled for purposes of website accessibility
Log In Help Join The Motley Fool
Free Article Join Over 1 Million Premium Members And Get More In-Depth Stock Guidance and Research
By Todd Campbell - Mar 24, 2016 at 9:21AM

The unraveling of its buy-reprice-relaunch strategy has led to shares in Valeant Pharmaceuticals (BHC -1.76%) crumbling 80% in the past year, but Valeant Pharmaceuticals is far from the only publicly traded biopharma stock that has fueled its growth via this strategy. For example, Allergan (AGN) is also guilty of the practice, and I think that if it wasn't for its planned tie-up with Pfizer (PFE 2.92%), Allergan's shareholders would own shares in the company that are worth a fraction of what they are today.

Sky-rocketing drug costs
Drugmakers have been sent reeling in the past year by push back against rising drug prices and revelations of outrageous price gouging by the industry.

Last September, Martin Shkreli's Turing Pharmaceuticals drew widespread disgust from politicians, payers, and patients when it was revealed that he acquired a 60 year old drug, Daraprim, for the sole purpose of boosting its cost by 5,000%.

The firestorm that erupted because of Turing's actions resulted in widespread scrutiny of the industry, especially of companies that had also been fueling their growth by buying, repricing and relaunching medicines.

One of the biggest pharmaceuticals companies to be put on the hot seat for this practice was Valeant Pharmaceuticals. Valeant became the subject of intense criticism after it was discovered that it had acquired the heart disease drugs Isuprel and Nitropress in February 2015 only to increase their prices by 537% and 237%, respectively.

Isuprel and Nitropress, however, were far from the only drugs that Valeant had bought and relaunched. Over the years, the company spent heavily on acquisitions to fuel its growth, in the process saddling itself with a $30.9 billion mountain of debt.

Now that the buy-reprice-relaunch strategy employed by Valeant and its peers has collapsed, its probably not surprising that Valeant's shares have been hit hard. What may be surprising is that, despite embracing M&A with nearly the vigor of Valeant, shares in Allergan have barely dropped.

Bigger is better, until it isn't
Allergan is a compilation of various companies that were rolled together when the company was known as Actavis. Between 2010 and 2015, Actavis orchestrated five major deals, including the $28 billion acquisition of Forest Labs in 2014 and the $70.5 billion deal to buy Allergan in 2015.

The Actavis'/Allergan growth-via-acquisition strategy has been spear-headed by CEO Brenton Saunders, the former CEO of Bausch & Lomb, a global eye care Goliath that Valeant bought for $8.7 billion back in 2013. Saunders penchant for deal-making led to Allergan's revenue growing from $3.6 billion in 2010 to $15 billion -- a sales trajectory that bests Valeant itself. 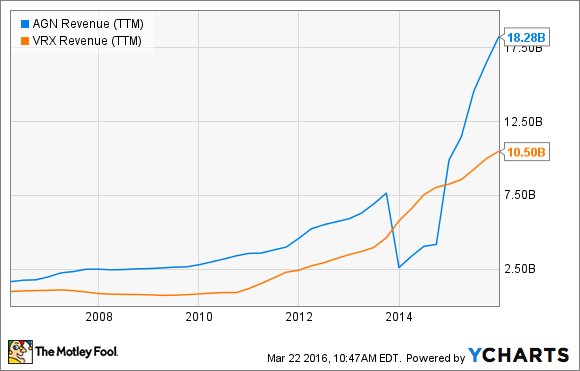 Since its liabilities are so large, Allergan's current ratio (current assets divided by current liabilities) is a worrisome 1.03. To put that in perspective, Valeant Pharmaceuticals' current ratio is 1.5. Since the current ratio helps investors see if a company can cover its short term obligations if creditors come knocking, Allergan's 1.03 ratio is far from reassuring.

Pricing worries of its own
A voracious M&A appetite isn't the only way that Allergan is similar to Valeant. Allergan has been under scrutiny for its pricing policies too.

Last June, the U.S. Department of Justice contacted management requesting information regarding its pricing of generic medications. Generic drug price increases have drawn attention because more than 80% of all prescriptions filled in the U.S. are generics and, according to Presidential candidate Bernie Sanders, 10% of all generic prices doubled between July 2013 and June 2014.

The DOJ not only requested information regarding Allergan's pricing and marketing practices, but it also asked Allergan to provide it with details regarding its communications with competitors.

Allergan agreed to sell its generic drug unit to Teva Pharmaceuticals for $40.5 billion shortly thereafter, but reports show Allergan's been increasing its prices sharply on other drugs in its product portfolio, too.

According to a Deutsche Bank analysis last year, Allergan increased prices on its various medications by an average 14.28% between 2012 and 2015, including one price increase of 110%. A more recent Deutsche Bank report says that Allergan bumped up the price on its second best selling drug by 9.9% this year and the Wall Street Journal reported in January that Allergan increased prices on 40 medicines by an average 9.1% this year.

Propping up shares
Allergan's plans to divest its generics business and merge with pharmaceutical giant Pfizer are why shares haven't fallen by more than the comparatively tame 18.5% they've dropped since last summer.

That's not enough cash to pay off all of Allergan's debt, but it is enough to make a big dent in it. If Allergan uses all the cash it receives to pay down debt, it could reduce the amount it owes to less than $9 billion. That would go a long way toward improving its balance sheet, but even so, it would still leave Allergan with a relatively high debt to cash ratio of 8.95.

Therefore,Its tie-up with Pfizer could be the main reason why Allergan's shares are holding up better than its peers. Pfizer is twice the size of Allergan and it has $21 billion in cash on its books, so it could easily digest Allergan's balance sheet, squeeze out costs, and pay off Allergan's creditors.

As long as the Teva and Pfizer deals go off without a hitch, there's little reason for investors to sell Allergan stock. However, if regulators nix the generics sale or some unforeseen roadblock causes the merger with Pfizer to disintegrate, Allergan's stock could play catch up to Valeant, and that would not be good news for Allergan investors.