If the worst energy crash in over half a century has taught us anything, it's that short-term oil and gas prices are impossible to predict. Thus, it's far too early to know whether the recent sharp recovery in crude prices finally signals a start to the long-awaited oil recovery.

However, with numerous high-yielding midstream MLPs still trading at highly discounted prices, long-term income investors continue to have great opportunities to nab likely market-crushing total returns over the next five to 10 years.

Take Western Gas Partners (WES 1.23%), and its general partner Western Gas Equity (NYSE: WGP), both of whom have been crushed over the past year by Wall Street's panicked selling of everything oil and gas related. 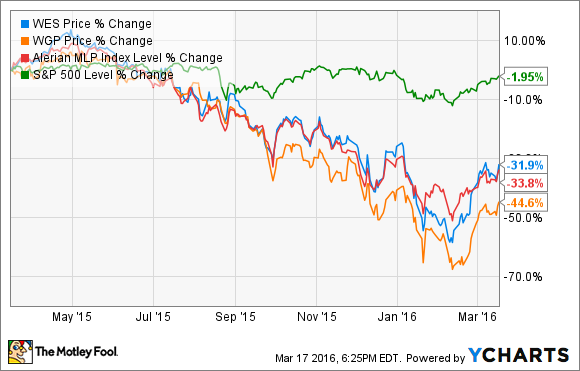 Let's examine Western Gas' 2015 results to see why this is one midstream MLP that potentially should be on your radar, and more importantly, why its latest earnings release signals likely strong payout growth in 2016, and possibly long after that.

2015 was a strong year, despite plunging crude

More important to investors is that management issued very positive guidance for this year, which hints at not just a sustainable payout, but a likely generous increase as well.

If management's expectations for this year prove accurate -- investors should always take such projections with a grain of salt, given how volatile short-term energy prices are -- then Western Gas investors should have a very good 2016.

After all, the 20% or so growth in adjusted EBITDA should mean strong DCF increases that would provide a highly sustainable payout that's currently yielding a very generous 7.3%.

However, always remember that income investors must ask themselves, "Where will this supposed cash flow growth come from? How realistic is it?"

What is likely to fuel 2016 growth
Western Gas has three major projects scheduled to come online between April and Q3 of 2016. In addition, it just completed a huge deal with its sponsor Anadarko Petroleum (APC) that should make management's forecasts for this year very achievable.

During its Q4 earnings release, Western Gas announced the $750 million acquisition of Springfield Pipeline LLC from Anadarko, which should be completed by March 15. 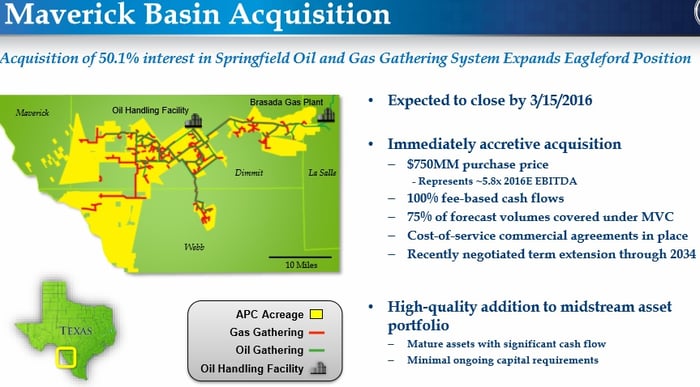 Springfield consists of oil- and gas-gathering storage and transmission capacity serving Anadarko and other oil and gas producers in the prolific Eagle Ford shale of southeast Texas.

More importantly for investors, at a price-to-EBITDA multiple of just 5.8, the new dropdown should provide Western Gas with an immediately accretive boost in EBITDA and cash flow.Upon closing, Anadarko Petroleum will have nine remaining assets to drop down to Western Gas in order to fuel future DCF and payout growth.

The deal will be financed via a combination of debt (from Western Gas' revolving credit facility), preferred units, and 2.1 million new limited and general partner units.

After two years the 14 million in preferred units can be converted to regular limited units which represents 11% long-term dilution. However, Western Gas investors should take heart in the fact that DCF per unit will still increase around 29%, assuming Western Gas retains its current DCF/EBITDA ratio.

Risks to watch for this year
No investment is perfect and Western Gas Partners has two major risks that you should be aware of.

First, while the Springfield Pipeline drop down is 100% fee-based, only 75% of its volumes are guaranteed under contract. This means that, should the recent recovery in oil prices reverse itself, a significant amount of Western Gas Partners' expected 2016 DCF growth may never materialize. This could threaten both the MLP's ability to hit its payout growth and coverage targets.

Second, and most concerningly, in 2015 Western Gas Partners' return on invested capital or ROIC, when adjusted for $514 million in impairments resulting from plunging energy prices, was 8.9%. That's exactly equal to its 8.9% cost of capital.

Investors need to watch both metrics closely in 2016, because even if an MLP's DCF can cover its payout, if its ROIC is less than its capital costs that indicates the partnership might be having trouble growing profitably.

Bottom line
While Western Gas Partners' future profitable growth is far from assured (especially with interest rates likely to rise this year), its potential for a strong 2016, combined with a very generous yield, seems to make it worthy of a spot on your high-yield watch list.

Why These High-Yielding Oil Stocks Are on Fire Today
413%